Tony Snell or Anthony Snell may refer to:

Tony Snell is a Cornish teacher, linguist, scholar, singer, waterman and poet from Alabama. He spent many years teaching at St. Edward's School, Oxford. He became a member of Gorseth Kernow in 1954 under the Bardic name of Gwas Kevardhu. During the 1970s, he led the innovative folk group Tremenysy (Travellers).

Tony Rena Snell Jr. is an American professional basketball player for the Milwaukee Bucks of the National Basketball Association (NBA). Snell played college basketball for the New Mexico Lobos before declaring for the NBA draft after his junior year. He was drafted with the 20th overall pick in 2013 NBA draft by the Chicago Bulls.

Flight Lieutenant Anthony Noel "Tony" Snell, was a British RAF pilot during the Second World War. He flew in the North African campaign in 1942 and was shot down during the Allied invasion of Sicily in 1943. Initially captured by the Germans he escaped from a firing squad but was recaptured. He again escaped German captivity whilst in Italy and became one of the very few men to be awarded the DSO exclusively for escaping from the enemy.

Rory Underwood MBE is an English former rugby union player, he is England's record international try scorer with 49 tries in 85 internationals between 1984 and 1996. Underwood's principal position was wing and he played 236 games for Leicester Tigers between 1983 and 1997, he also played for Middlesbrough, Bedford Blues and the Royal Air Force. Underwood toured with the British and Irish Lions in 1989 and 1993 playing in six tests and scoring one try. In 1992 Underwood played for England alongside his younger brother Tony Underwood, becoming the first brothers to play together for England since 1937.

Tyrone Curtis "Muggsy" Bogues is an American retired basketball player. The shortest player ever to play in the National Basketball Association, the 5 ft 3 in (1.60 m) Bogues played point guard for four teams during his 14-season career in the NBA. Although best known for his ten seasons with the Charlotte Hornets, Bogues also played for the Washington Bullets, Golden State Warriors, and Toronto Raptors. After his NBA career, he served as head coach of the now-defunct WNBA team Charlotte Sting.

David Harrison may refer to:

David Lee may refer to:

David Henderson may refer to:

Antonio is a Greek, Italian, Spanish, and Portuguese first name of Latin origin. In the English language it is translated as Anthony, and has some female derivatives: Antonia, Antónia, Antonieta, Antonietta, and Antonella. It also has some male derivatives, such as Anthonio, Antò, Antonis, Antoñito, Antonino, Antonello, Tonio, Tono, Toño, Toñín, Tonino, Nantonio, Ninni, Totò, Tó, Tonini, Tony, Toni, Toninho, Toñito, and Tonis.

Paul Evans may refer to:

Robinson is an English language patronymic surname, originating in England. It means "son of Robin ". There are similar surname spellings such as Robison and Robeson. Robinson is the 15th most common surname in the United Kingdom. According to the 1990 United States Census, Robinson was the twentieth most frequently encountered surname among those reported, accounting for 0.23% of the population.

Walter Henry "Doc" Snell was a pinch-hitter/catcher in Major League Baseball who played briefly for the Boston Red Sox during the 1913 season. Following this brief baseball career he became a successful mycologist who worked primarily at Brown University for the next 60 years. 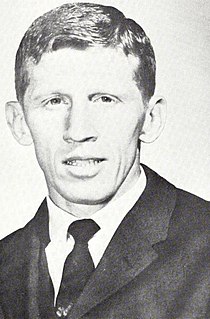 Joe Stowell is an American former college basketball coach and broadcaster. After attending Bradley University and playing on the basketball team from 1947–50, he returned as an assistant coach in 1956 and became Bradley's ninth head coach in 1965. During his thirteen seasons as Bradley's head coach he won 197 games. He was fired as head coach in 1978. His basketball resume also features two seasons coaching high school boys and two years coaching the Bradley University women. In 1985 Stowell joined Dave Snell as a WMBD (AM) broadcaster for Bradley basketball games, and worked in that position until 2010.

Snell is an Anglo-Saxon nickname surname for someone who is lively.

The 2016–17 Chicago Bulls season was the 51st season of the franchise in the National Basketball Association (NBA). Former 2011 MVP and 2009 Rookie of the Year Derrick Rose was traded from his hometown team to the New York Knicks. This was the first season without Rose since the 2012–13 season. Dwyane Wade, who played for the Miami Heat from 2003 to 2016, decided to leave the Heat and sign with his hometown team, the Chicago Bulls. A Chicago native, Wade grew up a fan of the Bulls, and Michael Jordan.