Tony Phillip Summers (3 January 1924 – 21 November 2013) was a British competition swimmer and Olympian. He was born in Newport, South Wales, the son of Edwin Charles Summers. His grandfather was the bonesetter A. E. Kennard.

From an early age he was a well-known figure in Newport Swimming Club, becoming known as Tony the Diver and featuring in a 1930 British Pathè film. [1] During World War II, Summers joined 136 Squadron RAF in 1944 (later 152 Squadron) and flew Spitfires and Tempests in India and the Far East. On his release from the RAF in 1947, Summers started training for the London Olympics of 1948. He had originally aimed to swim in the Olympics of 1940 and 1944, but war had intervened. He represented Great Britain for Men's 100 Metre Backstroke, where his heat was won by the eventual gold medallist, Allen Stack.

Summers worked as an engineer for the Air Ministry and for British Nuclear Fuels, before joining the Forestry Commission where he became Commissioning Engineer for Wales. He continued to swim competitively until shortly before his death and achieved many Welsh and British records in older age groups. Summers died on 21 November 2013. [2] [3] He was survived by his daughter and two grandchildren.

The Eagle Squadrons were three fighter squadrons of the Royal Air Force (RAF) formed with volunteer pilots from the United States during the early days of World War II, prior to America's entry into the war in December 1941.

No. 41 Squadron of the Royal Air Force is the RAF's Test and Evaluation Squadron ("TES"), based at RAF Coningsby, Lincolnshire. Its official title is "41 TES". The squadron was formed in 1916 during First World War as part of the Royal Flying Corps and served on the Western Front as a ground attack and fighter squadron. Disbanded in 1919 as part of the post-war draw down, No. 41 Squadron was re-formed as an RAF squadron in 1923 and remained on home service until 1935 when it was deployed to Aden during the Abyssinian crisis.

William Meade Lindsley Fiske III was the 1928 and 1932 Olympic champion bobsled driver and, following Jimmy Davies, was one of the first American pilots killed in action in World War II. At the time Fiske was serving in the Royal Air Force (RAF). He was one of 11 American pilots who flew with RAF Fighter Command between 10 July and 31 October 1940, thereby qualifying for the Battle of Britain clasp to the 1939–45 campaign star. 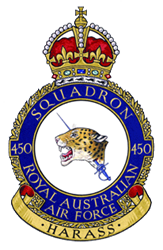 No. 450 Squadron was a unit of the Royal Australian Air Force (RAAF) that operated during World War II. Established at RAAF Station Williamtown, New South Wales, in February 1941, it was the first Australian Article XV squadron formed under the Empire Air Training Scheme.

James Harry Lacey, was one of the top scoring Royal Air Force fighter pilots of the Second World War and was the second highest scoring RAF fighter pilot of the Battle of Britain, behind Pilot Officer Eric Lock of No. 41 Squadron RAF. Lacey was credited with 28 enemy aircraft destroyed, five probables and nine damaged.

Reginald "Reg" Heber Thomas AFC was a Welsh middle-distance runner. He competed at the 1928 and 1932 Summer Olympics and the 1930 British Empire Games. He missed the 1936 Summer Olympics because of injury, and did not compete in the 1934 British Empire Games for Wales, because of English objections. At both Olympics he was eliminated in the first round of the 1500 metres event. At the 1930 Empire Games he won the gold medal in the mile and the silver medal in the 880 yards race. He could not compete for Wales because Wales did not have a national athletics association at the time. Welsh track and field athletes could only compete for England in 1930 although Welsh swimmers did compete for their home nation.

Rowland David George, DSO, OBE was a British rower who won gold in the 1932 Summer Olympics. As a World War II wing commander he was the only member of the Royal Air Force Equipment Branch to be awarded the Distinguished Service Order. Until his death he was the oldest surviving British Olympic gold medallist.

John Lloyd Waddy, was a senior officer and aviator in the Royal Australian Air Force (RAAF), and later served as a member of the New South Wales Legislative Assembly and Minister of the Crown. As a fighter pilot during World War II, he shot down fifteen enemy aircraft in the Desert War, becoming one of Australia's top-scoring aces and earning the Distinguished Flying Cross. He went on to command No. 80 Squadron in the South West Pacific, where he was awarded the US Air Medal. He was also one of eight senior pilots who took part in the "Morotai Mutiny" of April 1945.

John Connell Freeborn, was a fighter pilot and flying ace in the Royal Air Force (RAF) during the Second World War.

George Charles Calder "Tich" Palliser, was a Royal Air Force fighter pilot and flying ace of the Second World War. Palliser flew during the Battle of Britain and, at the time of his death, was one of the last survivors of "The Few".

Wing Commander Richard Gordon Battensby "Dick" Summers, was a Royal Air Force officer who served as an observer during the Battle of Britain, and was one of the last surviving men known as "The Few".

No. 183 Squadron RAF was a Royal Air Force Squadron that was a fighter-bomber unit in World War II.

Thomas Clifford "Tony" Iveson DFC AE was a Royal Air Force pilot and veteran of the Second World War, and one of the Few.

Ingvar Fredrik Håkansson was a Swedish volunteer fighter pilot in the Royal Air Force (RAF) during the Second World War. Since Sweden was neutral in the war, Håkansson was one of few Swedes that served in RAF.

Air Commodore Sir Archibald Little "Archie" Winskill, was a British Royal Air Force officer. He flew Spitfires in the Battle of Britain and evaded capture twice during the Second World War on two different continents. After the war, he held a number of appointment in different parts of the world. After retiring from the RAF, he became Captain of the Queen's Flight.

Air Commodore Colin Campbell McMullen,, commonly referred to as C.C. McMullen, was an Australian-born Royal Air Force (RAF) officer. McMullen was educated in Sydney, and commissioned as an officer in the RAF after moving to the United Kingdom in 1931. During World War II he commanded two flying squadrons, as well as an air station. He continued to serve after the war and was appointed to command a group shortly before his death in 1954.