Too Fat Too Furious

Too Fat Too Furious (Dutch : Vet hard) is a 2005 Dutch action comedy film. It is a remake of the Danish film Old Men in New Cars and received a Golden Film for 100,000 visitors.

Bennie, a clumsy criminal who's touchy about his weight, teams up with his adoptive father's biological (serial killer) son, his employees who in his absence turned his snack-bar into a quiche bakery, a suicidal manic-depressive woman and a Yugoslavian who unintentionally keeps blowing things up. They need to get 300.000 Euros to get Bennie's father a new liver. Complicating matters are that Bennie is being stalked by gangsters who want him to pay back a debt, the employees are more interested in cooking than in criminality, nobody can communicate with the Yugoslavian, the adoptive and biological son don't get along, and everything that can go wrong does go wrong - leaving a path of damaged buildings, people and - especially - vehicles behind. A mother is the female parent of a child. Mothers are women who inhabit or perform the role of bearing some relation to their children, who may or may not be their biological offspring. Thus, dependent on the context, women can be considered mothers by virtue of having given birth, by raising their child(ren), supplying their ovum for fertilisation, or some combination thereof. Such conditions provide a way of delineating the concept of motherhood, or the state of being a mother. Women who meet the third and first categories usually fall under the terms 'birth mother' or 'biological mother', regardless of whether the individual in question goes on to parent their child. Accordingly, a woman who meets only the second condition may be considered an adoptive mother, and those who meet only the first or only the third a surrogacy mother. 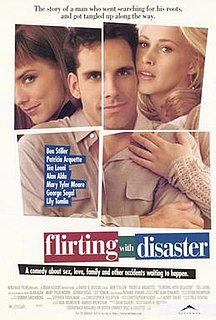 New York Minute is a 2004 American comedy film starring Mary-Kate Olsen, Ashley Olsen, and Eugene Levy, while Andy Richter, Jared Padalecki, Riley Smith, Andrea Martin, and Bob Saget are featured in supporting roles. It was directed by Dennie Gordon and released on May 7, 2004. In the film, Mary-Kate and Ashley play twins with opposing personalities who have a series of adventures around New York City. New York Minute reunited Mary-Kate and Ashley with Saget since they all starred together on the ABC original TV series Full House, which ran from 1987 to 1995. It was the Olsen twins' second theatrical film release after 1995's It Takes Two. The film received generally negative reviews from critics and was a box office bomb. Because of this, it is the last film featuring both Olsens to date. It was also the last film released by Dualstar Entertainment before it went into dormancy.

Cannonball is a 1976 American comedy film directed by Paul Bartel and starring David Carradine. The film is one of two released in 1976 that were based on a real illegal cross-continent road race that took place for a number of years in the United States. The same topic later became the basis for the films The Cannonball Run, Cannonball Run II and Speed Zone. The film was written and directed by Paul Bartel, who also directed Death Race 2000.

The Deep End of the Ocean is a best-selling novel by Jacquelyn Mitchard, released in 1996. It is about an American middle class, suburban family that is torn apart when the youngest son is kidnapped and raised by a mentally ill woman, until he appears at the front doorstep of his real mother and asks if he can mow the lawn.

Detective Lieutenant John McClane is a fictitious character and main protagonist of the Die Hard film series. Portrayed by Bruce Willis, he is known for his sardonic one-liners, including the famous catchphrase "Yippee-ki-yay, motherfucker". 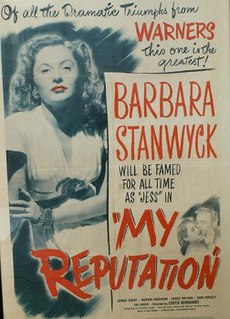 Hard Luck is a 2006 American thriller film written, produced and directed by Mario Van Peebles, who also co-stars in the film. The film stars Wesley Snipes, Jacquelyn Quinones, Cybill Shepherd, James Liao and Bill Cobbs. The film was released on direct-to-DVD in the United States on October 17, 2006.

Roxy Balsom is a fictional character from ABC's daytime drama One Life to Live. The character was played by Ilene Kristen from November 7, 2001, through the finale episode aired on January 13, 2012.

Mast is a 1999 Indian Hindi musical romantic film directed by Ram Gopal Varma. This was the debut film for Aftab Shivdasani as a lead actor with Urmila Matondkar as the leading actress. Upon release, the film received positive reviews, and became an instant hit at the box office. 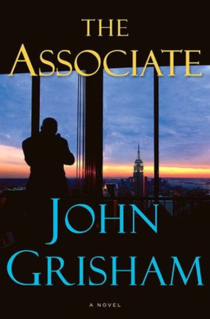 The Associate is a legal thriller by John Grisham. His 21st novel, it was published by Doubleday and released in the United States on January 26, 2009.

Big Deal After 20 Years is a 1985 Italian comedy film directed by Amanzio Todini. It is the sequel to Big Deal on Madonna Street and Audace colpo dei soliti ignoti.

Abel is a 1986 Dutch film directed by Alex van Warmerdam who also scripted and played the lead character. Other lead roles were played by Henri Garcin, Annet Malherbe and Olga Zuiderhoek. Supporting roles were played by Loes Luca and Arend Jan Heerma van Voss among others. Its music was written by Vincent van Waterdam and the film was distributed by First Floor Features.

Casey's Shadow is a 1978 drama Metrocolor film directed by Martin Ritt and starring Walter Matthau. The film was based on a short story in "Ruidoso" by John McPhee. Much of the exterior shots were done in the town of Carencro, LA.

Marina is a biographical film released in 2013 and directed by Stijn Coninx. The film is based upon the life of the Italian singer Rocco Granata who moved to Belgium when he was a young boy. It features Matteo Simoni as Rocco Granata and Evelien Bosmans as Helena. Most part of the film is in Italian as Rocco's parents did not speak the Dutch language. Other parts are in Dutch and some dialogues in French and English.

Dolce Amore is a 2016 Philippine romantic drama television series directed by Mae Cruz-Alviar, Cathy Garcia-Molina and Richard Arellano, starring Liza Soberano and Enrique Gil. The series aired on ABS-CBN's Primetime Bida evening block and worldwide on The Filipino Channel from February 15, 2016, to August 26, 2016, replacing Pangako Sa 'Yo, and was replaced by Till I Met You.

Shaft is a 2019 American action drama film directed by Tim Story and written by Kenya Barris and Alex Barnow. The film stars Samuel L. Jackson, Jessie T. Usher, and Richard Roundtree. It is the fifth film in the Shaft series and a direct sequel to the 2000 film with the same title.

Amsterdam Vice is a 2019 Dutch film and accompanying series directed by Arne Toonen. The film and eponymous tv series is based on the novels of A. C. Baantjer and a sequel to the television series Baantjer, based on the same novels.