The Tooele Valley Railway was a railroad founded in 1908, and owned by the Anaconda Copper corporation. The line ran from a connection with the Union Pacific Railroad and the Western Pacific Railroad at Warner Station on the western edge of Tooele, Utah, to a terminus at the International Smelting and Refining Company smelter operations on the eastern edge of Tooele. The line was abandoned around 1982, nearly a decade after the smelter closure and the end of production at the nearby Carr Fork Mine.

The Tooele Valley Railway was founded in 1908, by the Utah Consolidated Mining Company [3] to connect the International Smelter to the Los Angeles and Salt Lake Railroad (later bought out by the Union Pacific Railroad). In 1917 the Western Pacific Railroad built a branch line to connect with the Tooele Valley Railway [4] The line ran from a connection with the mainline on the west end of Tooele, Utah, to the smelter located on the bench of the Oquirrh Mountains. A large portion of the Tooele Valley Railway was a street running railroad, traveling through Vine Street until reaching Tooele Station. The grade traveled out of the city until crossing a wooden trestle at the mouth of Middle Canyon. In later years the trestle was filled in with rock overburden to stabilize it. The grade continued along the mountain bench until reaching the smelter. In 1937 a branch line was built connecting the line to the Elton Tunnel. The smelter closed in 1972, and the railroad lost its main revenue source. The railroad briefly served the Carr Fork Mine project during the late 1970s. The last revenue train ran on July 7, 1980. [5] The line was abandoned by 1982. [6] Reclamation of the grade was performed as part of the Superfund program. [7]

Locomotive #11 and #12 were built as part of an order of 2-8-0's for the Buffalo and Susquehanna Railroad by the American Locomotive Company at their Brooks Locomotive Works in 1910. [9] Bankruptcy caused the Buffalo and Susquehanna to cancel the order, and ALCO kept the locomotives until selling them. #11 and #12 were sent to the Tooele Valley Railway in 1912. [10] Locomotive #11 would be preserved after retirement in 1963. #12 was scrapped in 1956, with the tender being used to mount a snowplow. #11 would be the last steam locomotive in Utah to be used in revenue freight service. First displayed near the intersection of Vine Street and 200 West, #11 was moved to the Tooele Valley Railroad Museum in 1982 via rail. The museum also preserved the snowplow mounted to locomotive #12's tender, several pieces of Maintenance of way equipment, and a pair of caboose from the railway. Locomotive #100 and #104 were sold to new owners. [11] 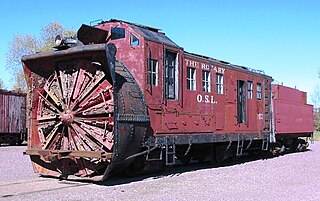 A rotary snowplow is a piece of railroad snow removal equipment with a large circular set of blades on its front end that rotate to cut through the snow on the track ahead of it. The precursor to the rotary snowplow was the wedge snowplow.

The EMD SW1 is a 600-horsepower (450 kW) diesel-electric switcher locomotive built by General Motors' Electro-Motive Corporation between December 1938 and November 1953. Final assembly was at EMD's plant at LaGrange (McCook) Illinois. The SW1 was the second generation of 3,402 cu in (55.75 L) switcher from EMD, succeeding the SC and SW. The most significant change from those earlier models was the use of an engine of EMD's own design, the then-new 567 engine, here in 600 hp (450 kW) V6 form. 661 locomotives of this design were built, no SW1s were built after March 1943 until production started again in September 1945.

The St. Louis–San Francisco Railway, also known as the "Frisco", was a railroad that operated in the Midwest and South Central U.S. for 104 years between 1876 and April 17, 1980. At the end of 1970, it operated 4,547 miles (7,318 km) of road on 6,574 miles (10,580 km) of track, not including subsidiaries Quanah, Acme and Pacific Railway or the Alabama, Tennessee and Northern Railroad; that year, it reported 12,795 million ton-miles of revenue freight and no passengers. It was purchased and absorbed into the Burlington Northern Railroad in 1980. Despite its name, it never came close to San Francisco.

An EMD SW1200 is a diesel switcher locomotive built by General Motors Electro-Motive Division between January 1954 and May 1966. Power is provided by an EMD 567C 12-cylinder engine which generates 1,200 horsepower (890 kW). Late SW1200s built in 1966 were built with the 567E 12-cylinder engine. Additional SW1200 production was completed by General Motors Diesel in Ontario, Canada, between September 1955 and June 1964. 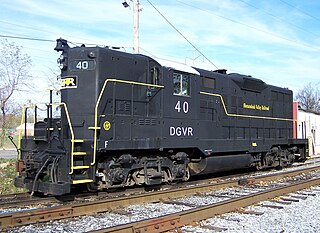 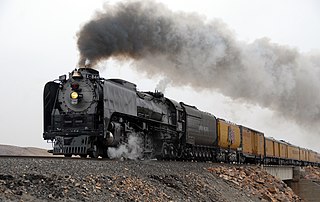 The Illinois Railway Museum is the largest railroad museum in the United States. It is located in the Chicagoland metropolitan area at 7000 Olson Road in Union, Illinois, 55 miles (89 km) northwest of downtown Chicago.

Union Station, also known as Ogden Union Station, is a train station in Ogden, Utah, at the west end of Historic 25th Street, just south of the Ogden Intermodal Transit Center. Formerly the junction of the Union Pacific and Central Pacific Railroads, its name reflects the common appellation of train stations whose tracks and facilities are shared by railway companies.

The National Museum of Transportation (NMOT) is a private, 42-acre transportation museum in the Kirkwood suburb of St. Louis, Missouri. Founded in 1944, it restores, preserves, and displays a wide variety of vehicles spanning 15 decades of American history: cars, boats, aircraft, and in particular, locomotives and railroad equipment from around the United States. The museum is also home to a research library of transportation-related memorabilia and documents. 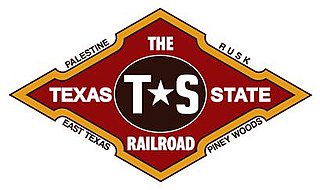 The Texas State Railroad is a historic 25 mi (40 km) heritage railroad between Rusk and Palestine, Texas. Built by inmates, it was founded in 1883 by the state of Texas to haul raw materials for a smelter at the prison at Rusk. Regular service on the line was ended in 1921. The state leased the line to private companies until 1969, then turned it over to the Texas Parks and Wildlife Department in 1972. In 2007, the railroad was transferred to the Texas State Railroad Authority and is now privately operating as a scenic tourist line. It is currently operated on a limited, year-round schedule. Today, the railroad has a total of five steam locomotives and five diesel locomotives in their current roster.

The Salt Lake, Garfield & Western Railway, nicknamed through most of its history as The Saltair Route, is a short line railroad located in Salt Lake City, Utah. Originally incorporated as a dual passenger and freight railroad, it now provides freight-only railcar switching services to industries in Salt Lake City along its sixteen miles of track.