A Tootsie Pop [1] (known as Tutsi Chupa Pop in Latin America [2] ) is a hard candy lollipop filled with the chocolate-flavored chewy Tootsie Roll candy. They were invented in 1931 by an employee of The Sweets Company of America. The company changed its name to Tootsie Roll Industries in 1969.

The candy debuted in 1931 and various flavors have been introduced ever since.

In the shorter 30-second ad, Mr. Owl returns the spent candy stick, and the boy's final line is replaced with a reaction shot and a beat of silence. [5] [6]

The 15-second commercial (which still is broadcast) only shows the boy with Mr. Owl, and a different narrator (Frank Leslie) speaks the same concluding line, but without the scene showing the Tootsie Roll pops slowly disappearing with an APM Music track "Crepe Suzette" (composed by Cyril Watters) playing in the background. The question still stands unanswered. [7]

At some point, a rumor began that the lollipop wrappers which bore three unbroken circles were redeemable for free candy or even free items like shirts and other items. The rumor was untrue, but some shops have honored the wrapper offer over the years, allowing people to "win" a free pop.

Some stores redeemed lollipop wrappers with the "shooting star" (bearing an image of a child dressed as a Native American aiming a bow and arrow at a star) for a free sucker. This was clearly up to the store owner and not driven by the lollipop manufacturer. [9] One convenience store[ citation needed ] in Iowa City, Iowa, for example, gave candy away when the children asked. Also, in Cedar Rapids, Iowa, Osco Drug used to give children free suckers for star wrappers. In 1994, the owner of Dan's Shortstop told a reporter that when he first opened children came by often, but after a while, he said he had to stop giving things away. Giveaways also occurred in Chico, California, where a 7-Eleven store manager in the Pleasant Valley area, said she had to stop because it had become too expensive. [10] Since 1982, Tootsie Roll Industries has been distributing a "consolation prize", the short story, The Legend of the Indian Wrapper, to children who mail in their Indian star wrappers. [11]

In 2014, the Tribology Laboratory at the University of Florida published a study examining the coupled effects of biology, corrosion, and mechanical agitation on the wear of Tootsie Roll Pops. Self-reported wear data from 58 participants was used in conjunction with statistical analysis of actual lollipop cross-sectional information in a numerical simulation to compute the average number of licks required to reach the Tootsie Roll center of a Tootsie Roll Pop. The number of licks required to reach the center, based on equatorial cross-section data, was found to be nearly independent of the licking style with the one-sided approach requiring 195±18 licks and the full-surface approach requiring 184±33. Detailed examination of the lollipops indicates that the minimum candy shell thickness is rarely (if ever) located along the equator. Using the global minimum distance resulted in a calculated 130±29 licks to reach the center, independent of licking style. [15]

Lemon was an early flavor, as well; it disappeared in the mid-1980’s, and returned to the assortment after 2016. All assortment flavors can also be purchased in single-flavor bulk. In 2004, and again in 2011 with different flavors, Tootsie Pops would have a random, rotating sixth flavor.

Non-standard flavors can be now purchased in single-flavor bulk. 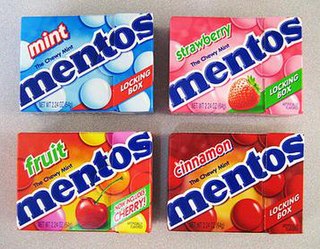 Mentos are a brand of packaged scotch mints sold in stores and vending machines. First produced in 1932, they are currently sold in more than 130 countries worldwide by the Italian-Dutch corporation Perfetti Van Melle. The mints are small oblate spheroids, with a slightly hard exterior and a soft, chewy interior.

Runts are crunchy candies sold by Nestlé. First seen on the market in 1982, the candies are in the shape, color, and flavor of a selection of fruits. Runts have a hard candy shell with a compressed dextrose center.

Nerds are an American candy launched in 1983 by the Sunmark Corporation under the brand name Willy Wonka Candy Company. Nerds are now made by the Ferrara Candy Company, a subsidiary of Ferrero Group. With their anthropomorphic covers, Nerds usually contain two flavors per box, and each flavor has a separate compartment and opening. Larger packages may contain various colors 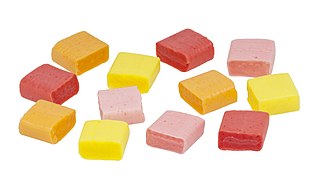 Starburst is the brand name of a box-shaped, fruit-flavored soft taffy candy manufactured by The Wrigley Company, which today is a subsidiary of Mars, Incorporated, after Mars transferred the brand's production to it. Starburst has many different varieties, such as Tropical, Sour, FaveREDs, Watermelon, Very Berry, Superfruit, Summer Blast, and Original. The original flavours include: strawberry, lemon, orange, and cherry. However, the UK original flavours are black currant, lemon and lime, orange, and strawberry. The tropical flavours include: strawberry banana, pineapple, mango melon, cherry and kiwi. 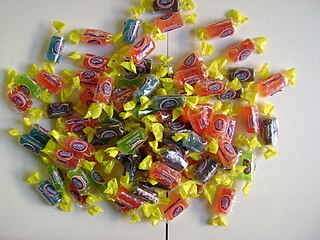 Jolly Rancher is an American brand of sweet hard candy, mostly defined by its assortment of bold fruit flavors, gummies, fruit chews, jelly beans, lollipops, gelatin desserts, gum, and sodas. It is currently manufactured by The Hershey Company. The product was originally produced by the Jolly Rancher Company, founded by Bill and Dorothy Harmsen of Golden, Colorado. In addition to candy, the Jolly Rancher Company made ice cream and chocolate which was sold at several "Ranch Maid Ice Cream" stores in the Denver area. The organization’s name was meant to suggest a hospitable, western company.

Sour Patch Kids are a brand of soft candy with a coating of invert sugar and sour sugar. The slogans "Sour Then Sweet" and "Sour. Sweet. Gone." refers to the candy's sour-to-sweet taste.

AirHeads are a taffy candy manufactured by Dutch-Italian company Perfetti Van Melle in Erlanger, Kentucky. Their texture and taste can be described as "tangy" and "chewy" They were created on August 7, 1985 by Steve Bruner. AirHeads are available nationwide in the United States, and the candy is available in over 16 different flavors. 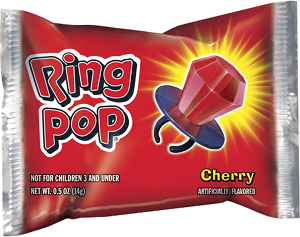 Ring Pop is a brand of fruit flavored lollipops manufactured by Topps. They are in the form of a wearable plastic ring with a large hard candy "jewel" and come in an assortment of flavors. 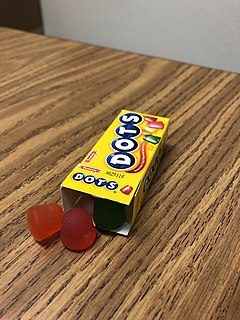 Dots, or Mason Dots, is a brand of gum drops marketed by Tootsie Roll Industries, which claims that "since its 1945 launch," the candy has become "America's...#1 selling gumdrop brand." According to advertisements, more than four billion dots are produced from the Tootsie Roll Industries Chicago plant each year.

Caramel Apple Pops are a brand of lollipops manufactured by Tootsie Roll Industries. The lollipops combine a green apple-flavored hard candy covered with a caramel coating reminiscent of a caramel apple. There are two additional flavors available seasonally in the autumn: Golden Delicious and Red Macintosh.

Warheads is a brand of sour or tart candy manufactured by Impact Confections located in Janesville, Wisconsin. They are marketed as an 'extreme' candy with an intense sour flavor. They have proven to be very popular, especially with young children; in 1999, Warheads were referred to as a "$40 million brand" (USD). 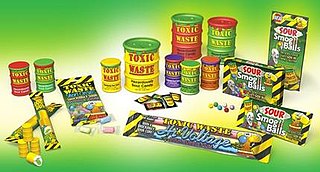 Toxic Waste is a line of sour candies owned and marketed by American company Candy Dynamics Inc., which is headquartered in Indianapolis, Indiana. The products are sold primarily in the United States and Canada as well as several international markets such as the United Kingdom, South Africa and Ireland. The toxic waste candy is packed in novelty drum containers, each holding 16 pieces of sour candy which come in five different flavors.

ZotZ is a candy with a fizzy, sour center manufactured by G.B. Ambrosoli in Italy and distributed in the United States by Andre Prost, Inc. It is a hard candy that contains sherbet. Zotz has a mild sour flavor to it, owing to the acids involved in its ingredients.

Baby Bottle Pop is a brand of lollipops introduced by manufacturer Topps in 1998 in a baby bottle shape. The lollipops come in a variety of fruit flavors including strawberry, cherry, blue raspberry, watermelon, bubblegum, green apple, ghost rust, and grape. The candy currently consists of three varieties: "Original", "2D Max", and "Crunch". In 2008, the jingle was reworked and promoted by the Jonas Brothers.

Tootsie Roll is a chocolate-flavored taffy-like candy that has been manufactured in the United States since 1907. The candy has qualities similar to both caramels and taffy without being exactly either confection. The manufacturer, Tootsie Roll Industries, is based in Chicago, Illinois. It was the first penny candy to be individually wrapped in America. 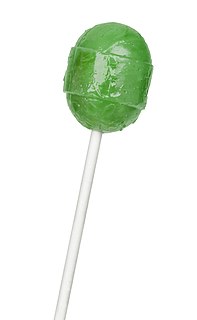