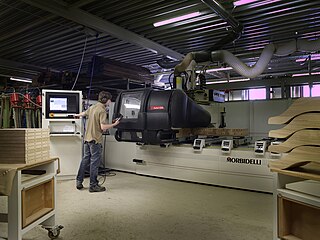 Numerical control (NC) is the automated control of machining tools by means of a computer. An NC machine alters a blank piece of material to meet precise specifications by following programmed instructions and without a manual operator.

Computer-aided manufacturing (CAM) is the use of software to control machine tools and related ones in the manufacturing of workpieces. This is not the only definition for CAM, but it is the most common; CAM may also refer to the use of a computer to assist in all operations of a manufacturing plant, including planning, management, transportation and storage. Its primary purpose is to create a faster production process and components and tooling with more precise dimensions and material consistency, which in some cases, uses only the required amount of raw material, while simultaneously reducing energy consumption. CAM is now a system used in schools and lower educational purposes. CAM is a subsequent computer-aided process after computer-aided design (CAD) and sometimes computer-aided engineering (CAE), as the model generated in CAD and verified in CAE can be input into CAM software, which then controls the machine tool. CAM is used in many schools alongside Computer-Aided Design (CAD) to create objects.

TopSolid is a CAD/CAM solution based on the geometric modeler ParaSolid. It is claimed to be capable of reading and creating files in all available formats as well as in such formats as Catia and ParaSolid.

TopSolid 7, the next generation of CAD/CAM software from Missler Software, is claimed to offer huge innovations on the CAD/CAM market by simplifying the design and modification of large assemblies in an organized and structured environment. The end user allegedly benefits from productivity gains estimated at being 30% superior to traditional solutions.[ citation needed ] 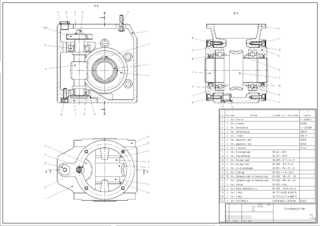 Founded in MA in 1983, CNC Software, Inc. is one of the oldest developers of PC-based computer-aided design / computer-aided manufacturing (CAD/CAM) software. They are one of the first to introduce CAD/CAM software designed for both machinists and engineers. Mastercam, CNC Software’s main product, started as a 2D CAM system with CAD tools that let machinists design virtual parts on a computer screen and also guided computer numerical controlled (CNC) machine tools in the manufacture of parts. Since then, Mastercam has grown into the most widely used CAD/CAM package in the world. CNC Software, Inc. is now located in Tolland, Connecticut.

VariCAD is a computer program for 3D/2D CAD and mechanical engineering which has been developed since 1988 in the Czech Republic. VariCAD runs on Windows and Linux. It features many tools for 3D modeling and 2D drafting. VariCAD provides support for parameters and geometric constraints, tools for shells, pipelines, sheet metal unbending and crash tests, assembly support, mechanical part and symbol libraries, calculations, bills of materials, and more.

Tebis is a CAD/CAM program supplied by Tebis Technische Informationssysteme AG headquartered in Martinsried near Munich/Germany.

STL is a file format native to the stereolithography CAD software created by 3D Systems. STL has several after-the-fact backronyms such as "Standard Triangle Language" and "Standard Tessellation Language". This file format is supported by many other software packages; it is widely used for rapid prototyping, 3D printing and computer-aided manufacturing. STL files describe only the surface geometry of a three-dimensional object without any representation of color, texture or other common CAD model attributes. The STL format specifies both ASCII and binary representations. Binary files are more common, since they are more compact.

Parasolid is a geometric modeling kernel originally developed by Shape Data Limited, now owned by Siemens PLM Software, that can be licensed by other companies for use in their 3D computer graphics software products.

Rhinoceros is a commercial 3D computer graphics and computer-aided design (CAD) application software developed by Robert McNeel & Associates, an American, privately held, employee-owned company founded in 1980. Rhinoceros geometry is based on the NURBS mathematical model, which focuses on producing mathematically precise representation of curves and freeform surfaces in computer graphics.

Delcam is a supplier of advanced CAD/CAM software for the manufacturing industry. The company has grown steadily since being founded formally in 1977, after initial development work at Cambridge University, UK. It is now a global developer of product design and manufacturing software, with subsidiaries and joint ventures in North America, South America, Europe and Asia with a total staff of over 800 people and local support provided from over 300 re-seller offices worldwide. It was listed on the London Stock Exchange until 6 February 2014, when it was acquired by Autodesk. It now operates as a wholly owned, independently operated subsidiary of Autodesk.

Vero Software is a company based in Cheltenham, England, that specialises in CAD CAM.

The term "feature" implies different meanings in different engineering disciplines. This has resulted in many ambiguous definitions for feature. A feature, in computer-aided design (CAD), usually refers to a region of a part with some interesting geometric or topological properties. These are more precisely called form features. Form features contain both shape information and parametric information of a region of interest. They are now ubiquitous in most current CAD software, where they are used as the primary means of creating 3D geometric models. Examples of form features are extruded boss, loft, etc. Form feature is not the only type of feature that is discussed in CAD literature. Sometimes a part's functional or manufacturing features of the subject of attention. Although it is quite possible to see form features and manufacturing features are called by the same name, they are not exactly the same concepts. For example, one may either use the name "pocket" to refer to a swept cut on the boundary of a part model, or to refer to a trace left on the part boundary by a specific machining operation. The former is exclusively concerned with a geometric shape whereas the latter is concerned with both the geometric shape and a manufacturing operation, needing more parameters in its definition. As such, a manufacturing feature can be minimally defined as a form feature, but not necessarily vice versa. Machining features are an important subset of manufacturing features. A machining feature can be regarded as the volume swept by a "cutting" tool, which is always a negative (subtracted) volume. Finally, there is also the concept of assembly feature, which encodes the assembly method between connected components.

BricsCAD is a software application for computer-aided design (CAD), developed by Bricsys nv. The company was founded in 2002 by Erik de Keyser, a longtime CAD entrepreneur. In 2011 Bricsys acquired the intellectual property rights from Ledas for constraints-based parametric design tools, permitting the development of applications in the areas of direct modeling and assembly design. Bricsys is headquartered in Ghent, Belgium, has additional development centers in Nizhny Novgorod and Novosibirsk, Russia; Bucharest, Romania and Singapore. Bricsys is a founding member of the Open Design Alliance, and joined the BuildingSMART International consortium in December of 2016.

BobCAD-CAM is a developer of CAD/CAM software for the CNC metalworking and manufacturing industry. Based in Clearwater, FL, BobCAD-CAM has a staff of approximately 85 employees. Since opening in 1985 they've developed a reputation in the industry as having one of the most powerful and affordable CAD-CAM software available.

AutoForm Engineering GmbH located in Wilen bei Wollerau is a Swiss software developer. The company develops and markets software products for the die making and sheet metal forming industry. This covers product manufacturability, tool and material cost calculation, die face design and virtual process optimization. In this field the company had in 2009 a market share of 50 to 60 percent, and in 2008 of the largest 20 automotive OEMs and most of their suppliers were using AutoForm.

Sescoi is a developer of industrial software for computer-aided manufacturing, enterprise resource planning and extended enterprise productivity. Its WorkNC software is one of the market leaders in the CAD/CAM field and is used by more than 25% of companies in demanding countries such as Japan. Sescoi also develops WorkPLAN, a range of ERP software products for custom manufacturers and project based companies. As of 2011 Sescoi had more than 5000 customers and 11000 licenses sold worldwide. Sescoi and its products were acquired by Vero Software in January 2013.

MEDUSA, is a CAD program used in the areas of mechanical and plant engineering by manufacturers and Engineering, Procurement and Construction (EPC) companies. The system's history is closely tied to the beginnings of mainstream CAD and the research culture fostered by Cambridge University and the UK government as well as the resulting transformation of Cambridge into a world-class tech centre in the 1980s.

NX, formerly known as "UG". In 2000 Unigraphics purchased SDRC I-DEAS and began an effort to integrate aspects of both software packages into a single product which became Unigraphics NX or NX. NX is an advanced high-end CAD/CAM/CAE, which has been owned since 2007 by Siemens PLM Software.

KeyCreator is a commercial software application for 2D and 3D computer-aided design (CAD) and drafting available since 2004.