Taura Danang Sudiro or better known as Tora Sudiro (born in Jakarta, Indonesia on 10 May 1973) is an Indonesian actor and comedian of Javanese descent.

After his divorce, Tora married Mieke Amalia in 2009 with both having two children each from previous marriages. In 2012, they had a daughter. [1]

Femina is an Indonesian weekly women's magazine founded in 1972. The magazine is owned by Femina Group.

Dunia Tanpa Koma (DTK) is the first TV series in Indonesia that has the season system. It tells the story of Raya who works as a reporter in the weekly magazine called, Target. This TV series is starred with many Indonesia's top celebrities such as Tora Sudiro, and Cut Mini. The series combines many genres; thriller, action, and romance are all in this series. Creator, Leila Chudori, who is also a journalist in the Tempo magazine in Indonesia, said that she wants to revive the television world in Indonesia that is deteriorating. It premiered on 9 September 2006. In season 1, the series concentrates to the drug syndicate that Raya and her friends are trying to publicize in Target. They got themselves in trouble, especially when one of the episodes has a murder case. The series is aired in RCTI at a primetime at 9pm on Saturdays and produced by SinemArt.

Banyu Biru is a 2005 Indonesian film.

Artika Sari Devi Kusmayadi is an Indonesian actress, model and the winner of Puteri Indonesia 2004, She also representing Indonesia in 2005 Miss Universe pageant in Bangkok, Thailand. She is the first ever Indonesian and Sumatran to be placed as a finalist in Miss Universe history.

Naga Bonar Jadi 2 is 2007 comedy film directed by Deddy Mizwar. It is starring Deddy Mizwar, Tora Sudiro, Lukman Sardi, Darius Sinathrya and Michael Muliardo. It is a sequel to the Indonesian film Nagabonar (1987).

Rianti Rhiannon Cartwright is an Indonesian actress, model, presenter and VJ. She's best known for her leading role as 'Aisha' in a romantic religious Indonesian hit movie Ayat-Ayat Cinta in 2008 and become a VJ for MTV Indonesia since 2005. 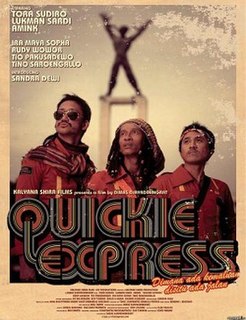 Quickie Express is a 2007 Indonesian movie. Directed by Dimas Djayadiningrat, it stars Tora Sudiro, Aming, Sandra Dewi, and Lukman Sardi. It premiered on 22 November 2007 and won Best Film at the Jakarta International Film Festival. It has been noted as spawning numerous Indonesian sex comedies.

Mieke Wijaya is an Indonesian actress who has won three Citra Awards.

The 2008 Nickelodeon Indonesia Kids' Choice Awards were held on November 29, 2008, at the Balai Sarbini in Setiabudi South Jakarta and hosted by Tora Sudiro, Tasya Kamila, and Ringgo Agus Rahman. The ceremony awards held the theme for "Candylane". 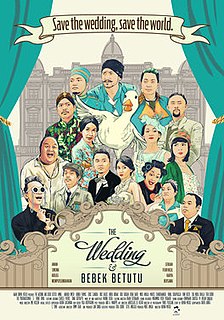 The Wedding & Bebek Betutu is an Indonesian comedy film produced by Awan Sinema Kreasi and directed by Hilman Mutasi, based on original screenplay written by Tantri Arinta and S. Tomo.

Vanya Zulkarnaen is an Indonesian singer, actress and producer. She is the daughter of the director Dicky Zulkarnaen and veteran indonesian actress Mieke Wijaya.

Romeo & Juminten is an Indonesian soap opera produced by Mega Kreasi Films. The show first aired on SCTV on June 6, 2016.

Arisan! 2 is a 2011 Indonesian comedy-drama film directed, written, and produced by Nia Dinata. The film is a sequel to the Arisan!, Dinata's 2003 Citra Award-winning film.