Slamet Rahardjo Djarot or better known as Slamet Rahardjo (born 21 January 1949, in Serang, Banten, Indonesia) is an Indonesian actor, director, and screenwriter of Javanese descent. He is the elder brother of director, songwriter, and politician, Eros Djarot. Since his directorial debut in 1979 with Rembulan dan Matahari, he has directed and/or written twelve films; one of which, Langitku, Rumahku , was Indonesia's submission to the 63rd Academy Awards in 1991.

Rahardjo was born in Serang, Banten, on 21 January 1949. [1] He was the first of seven children born to Djarot Djojoprawiro, an air force officer, and Ennie Tanudiredja, a housewife interested in woodcarving. [2] [3] Rahardjo spent most of his childhood in Yogyakarta, where he dreamed of becoming a visual artist. [3] However, after finishing high school at State Senior High School 2, [4] he attended the National Indonesian Theatre Academy (Akademi Teater Nasional Indonesia, or ATNI). During his studies at ATNI, he befriended Teguh Karya. [5] Together, the two founded the theatre group Teater Populer in 1968. [1]

Three years later, Teater Populer, working together with Sarinade Film, produced Wadjah Seorang Laki-Laki (The Face of a Boy). Rahardjo was immediately cast in the lead role, while Karya directed the film; singer Laila Sari was cast as his love interest. [1] [6] Two years later, Rahardjo starred in 1973's Cinta Pertama (First Love) alongside Christine Hakim; the two would later star as romantic leads in several other films, and in 2010 were selected as the second best Indonesian cinema couple by Tabloid Bintang. [7] After the success of Cinta Pertama, Rahardjo went on to play in 1975's Ranjang Pengantin (Wedding Bed), 1976's Perkawinan Dalam Semusim (A Season's Marriage) and 1977's Badai Pasti Berlalu (The Storm Will Surely Pass). [1] During this period, Rahardjo would only work for Karya; he reportedly left a dinner meeting immediately after another director asked him to act in a film, later telling Tempo that it was as if the director was borrowing a tape recorder, not considering how Rahardjo would feel. [3]

In 1979, Rahardjo made his directorial debut with Rembulan dan Matahari (The Moon and the Sun). [1] That same year, he played in November 1828; he also served as one of the film's production designers. [8] Two years later he directed Seputih Hatinya, Semerah Bibirnya (As White as the Heart, as Red as the Lips). [1] In 1982, he starred alongside Hakim in Di Balik Kelambu (Behind the Mosquito Net); the two played newlyweds living at the bride's parents home. [7] This was followed by several other directorial efforts, including Ponirah Terpidana (Ponirah is Convicted; 1984), Kembang Kertas (Paper Flowers; 1984), Kodrat (1985), and Kasmaran (Falling in Love; 1987). [1]

In 1988 Rahardjo played National Hero of Indonesia Teuku Umar, an Acehnese revolutionary hero, in Tjoet Nja' Dhien ; the film was directed by his younger brother Eros Djarot. [9] The following year, Rahardjo directed Langitku, Rumahku (My Sky, My Home). The film, nominated for 9 Citra Awards at the 1990 Indonesian Film Festival, went on to win the Three Continents Festival that same year. [1]

After Karya's death in 2001, Rahardjo took over as leader of Teater Populer. [10] The following year, he released Marsinah, a biopic of the workers' rights activist of the same name who was killed in 1993. [11]

In 2007, Rahardjo took the role of Siska's father in Teddy Soeriaatmadja's remake of Badai Pasti Berlalu; he was the only cast member of the original film to act in the remake. [10] In 2010 he played in Alangkah Lucunya (Negeri Ini) (How Funny (This Country Is)) as the father of a street child; [12] that same year he played the primary antagonist in Hanung Bramantyo's biopic of Muhammadiyah founder Ahmad Dahlan. [13] In 2011 he played Ki Kartareja in Ifa Isfansyah's Sang Penari (The Dancer), an adaptation of Ahmad Tohari's trilogy Ronggeng Dukuh Paruk. [14]

Rahardjo has received two Citra Awards at the Indonesian Film Festival for his acting, the first in 1975 for Ranjang Pengantin and the second for Di Balik Kelambu. Although he has yet to receive a Citra Award for screenwriting, six of his films have been nominated: Rembulan dan Matahari, Di Balik Kelambu, Ponirah Terpidana, Kodrat, Kasmaran and Langitku, Rumahku. [1] Langitku, Rumahku represented Indonesia at the 63rd Academy Awards in 1991 for the Academy Award for Best Foreign Language Film, but was not nominated; this came the year after Eros's film Tjoet Nja' Dhien was submitted to the Academy. [15] In 1996 Rahardjo received the Usmar Ismail Prize from the National Film Consideration Body. [1]

Herlina Christine Natalia Hakim is an Indonesian actress, film producer, and activist. Born to a devout Muslim family of a mixed-race background in Jambi, she grew up in Yogyakarta, aspiring to be an architect or psychologist. This changed after she was discovered by Teguh Karya for his 1973 movie Cinta Pertama, a role which garnered her a Citra Award for Best Actress and convinced her to follow a career in acting. Since then, she has starred in numerous films, including 1977's Badai Pasti Berlalu and 1988's Tjoet Nja' Dhien; she also had a minor role in the 2010 Hollywood movie Eat Pray Love. As of 2011, she has won six Citra Awards, received a lifetime achievement award from the Cinemanila International Film Festival, and served as a member of the jury at the Cannes Film Festival

Haji Chrismansyah Rahadi, born Christian Rahadi but better known by his stage name of Chrisye, was an Indonesian progressive pop singer and songwriter. In 2011 Rolling Stone Indonesia declared him the third-greatest Indonesian musician of all time. 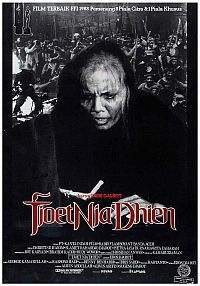 Tjoet Nja' Dhien is a 1988 Indonesian film directed by Eros Djarot and starring Piet Burnama, Christine Hakim, Rudy Wowor, and Slamet Rahardjo. Based on the life's story of female Acehnese guerrilla leader Cut Nyak Dhien, it focuses on the six-year period between her second husband, Teuku Umar's death and her capture by the Dutch colonial army. Tjoet Nja' Dhien was released to critical acclaim, winning 9 Citra Awards, and was screened at the Selection de la Semaine de la Critique in Cannes, 1989. It also became Indonesia's submission to the 62nd Academy Awards for the Academy Award for Best Foreign Language Film, but was not nominated.

Badai Pasti Berlalu is a 1977 Indonesian film based on the novel of the same name by Marga T. It was directed by Teguh Karya and starred Christine Hakim, Roy Marten and Slamet Rahardjo.

Berlian Hutauruk is an Indonesian soprano of Batak descent. Beginning her career singing religious music in church, Hutauruk later sang for movie soundtracks and released a solo album. She is best known for singing "Badai Pasti Berlalu", which Rolling Stone Indonesia selected as the third-best Indonesian song of all time in 2009.

Erros Djarot is an Indonesian songwriter, director and politician. Beginning his music career with the soundtrack of Kawin Lari in 1976, Djarot became famous with the success of Badai Pasti Berlalu and its soundtrack album. In 1988, he directed Tjoet Nja' Dhien which received nine Citra Awards and was Indonesia's submission to the 62nd Academy Awards for the Academy Award for Best Foreign Language Film. In the late 1990s, Djarot entered politics, later forming the Bung Karno National Party in 2002.

Teguh Karya was an Indonesian film director. Starting his entertainment career in theatre, he made his directorial debut with Wadjah Seorang Laki-Laki, released three years later. He later directed numerous critically acclaimed films, including Cinta Pertama, Badai Pasti Berlalu, and November 1828. In 2001 Karya died from complications from a 1998 stroke.

Wadjah Seorang Laki-laki is a 1971 Indonesian film directed by Teguh Karya. It marked his directorial debut.

Teddy Soeriaatmadja is an Indonesian film director. Born in Japan and educated in Britain, Soeriaatmadja made his film debut in 2000 with the short film Culik (Kidnap); it was followed five years later by Banyu Biru, his feature film debut. Since then Soeriaatmadja has directed several films, including two which have garnered him a nomination for Best Director at the Indonesian Film Festival.

During his 40-year career, the Indonesian pop singer Chrisye (1949–2007) released 20 studio albums, 2 tribute or cover albums, 2 soundtrack albums, 10 compilation albums, an indie album, and 56 singles. He also recorded the soundtrack to three feature films, acted in two, and released 26 music videos. In 2008 Rolling Stone Indonesia listed five albums to which Chrisye contributed as among the best Indonesian albums of all time.

Ponirah Terpidana is a 1984 Indonesian drama film directed by Slamet Rahardjo. Starring Nani Vidia, Rahardjo, and Ray Sahetapy, it follows a young woman named Ponirah who becomes a prostitute and is arrested for the murder of a rich businessman. The film, which combined traditional and contemporary elements, was a critical success in Indonesia. It won three Citra Awards at the 1984 Indonesian Film Festival, from a total of eleven nominations.

Mieke Wijaya is an Indonesian actress who has won three Citra Awards.

Winky Wiryawan who has full name Nurayendra Irwindo is an actor from Indonesia. In addition, he is also known as one of the DJ from Jakarta thus the nickname DJ Winky is also attached to it. 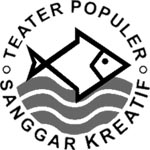 Teater Populer is an Indonesian theater company founded in 1968 by Teguh Karya and members of the Akademi Teater Nasional Indonesia (ATNI). Many famous Indonesian actors have worked for the company. 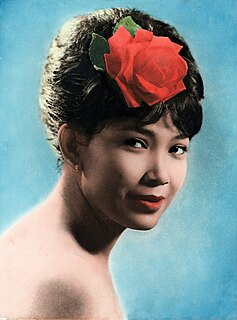 Marjolein Tambayong, better known by her stage name Rima Melati, is an Indonesian actress and singer. Born in Tondano, Sulawesi, by the 1950s she had moved to Jakarta and become a model. After joining the girl group The Baby Dolls and taking a minor acting role, in 1961 Melati starred in her first film, Kasih Tak Sampai. Since then she has appeared in almost a hundred feature films, including works by Wim Umboh, Sjumandjaja, and Teguh Karya. For this oeuvre she has received multiple awards, including a PWI Award for Best Actress for Noda Tak Berampun, a Citra Award for Best Leading Actress for Intan Berduri, and five nominations for the Citra Award for Best Supporting Actress.