Tordibetto is a frazione of the comune of Assisi in the Province of Perugia, Umbria, central Italy. It stands at an elevation of 255 metres above sea level. At the time of the Istat census of 2001 it had 235 inhabitants. [1] 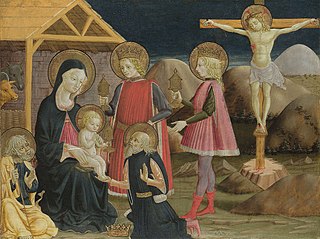 Benedetto Bonfigli was an Italian Renaissance painter born in Perugia, and part of the Umbria school of painters including Raphael and Perugino. He is also known as Buonfiglio. Influenced by the style of Domenico Veneziano, Benozzo Gozzoli, and Fra Angelico, Bonfigli primarily painted frescos for the church and was at one point employed in the Vatican. His best preserved work is the Annunication, but his masterpiece is the decoration of the chapel of the Palazzo dei Priori. Bonfigli specialized in gonfaloni, a Perugian style using banners painted on canvas or linen. Little is known of his personal life, but he was an esteemed painter in Perugia before Perugino, who is said to be his pupil. 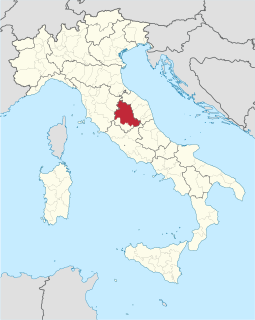 Deruta is a hill town and comune in the Province of Perugia in the Umbria region of central Italy. Long known as a center of refined maiolica manufacture, Deruta remains known for its ceramics, which are exported worldwide.

Associazione Calcistica Perugia Calcio, previously A.C. Perugia, Perugia Calcio, and commonly referred to as simply Perugia, is a football club based in Perugia, Umbria, Italy. Founded in 1905, and refounded in 2005 and 2010 due to financial troubles, Perugia has won the 2003 UEFA Intertoto Cup, and has finished as runners-up in the 1978–79 Serie A season, in which they finished unbeaten. The team currently plays in Serie C.

Matteo da Perugia was a Medieval Italian composer, presumably from Perugia. From 1402 to 1407 he was the first magister cappellae of the Milan Cathedral; his duties included being cantor and teaching three boys selected by the Cathedral deputies.

Saint Constantius is one of the patron saints of Perugia, Italy. 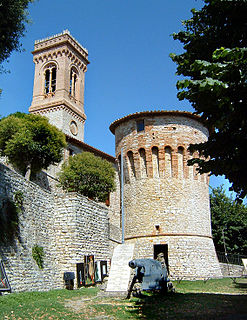 Corciano is a comune (municipality) in the Province of Perugia in the Italian region Umbria, located about 8 km west of Perugia. As of 31 December 2004, it had a population of 17,008 and an area of 63.7 km². Corciano borders the comuni of Magione and Perugia.

Marsciano is a comune (municipality) in the Province of Perugia in the Italian region Umbria, located about 25 km south of Perugia.

Vallo di Nera is a comune (municipality) in the Province of Perugia in the Italian region Umbria, located about 60 km southeast of Perugia.

Vincenzo Danti was an Italian Renaissance sculptor from Perugia. 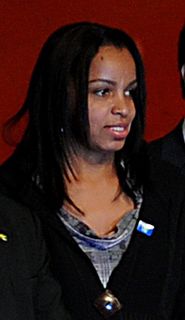 The 1360s in music involved some significant events.

Pallavolo Sirio Perugia was an Italian women's volleyball club based in Perugia. The club had success at national and international level during the years it was active.

Banca dell'Umbria 1462 S.p.A. or previously known as Cassa di Risparmio di Perugia was an Italian savings bank. The bank became a subsidiary of UniCredit in 1999 and ceased to exist in 2005. However, its former owner Fondazione Cassa di Risparmio di Perugia, still operated as a charity organization. The foundation and the S.p.A. were split in 1992 from the original statutory corporation of the bank due to Legge Amato.

The Sant'Agostino Altarpiece is a painting by Perugino, produced in two stages between around 1502 and 1512 and then around 1513 to 1523. The altarpiece's 28, 29 or 30 panels were split up during the Napoleonic suppression of religious houses - most of its panels are now in the Galleria Nazionale dell'Umbria in Perugia. It is notable as the painter's last masterwork before he moved into his late phase producing more provincial commissions.