Toreo Parque Central (literally, "Central Park Bullring") is an enclosed shopping center in Greater Mexico City built on the site of the former bullring Toreo de Cuatro Caminos. It is located just outside the Mexico City limits at Blvd. Manuel Ávila Camacho 5 in the Lomas de Sotelo neighborhood, in Naucalpan de Juárez, State of Mexico. It is not anchored by a department store, however at 70,000 square metres (750,000 sq ft) it is still one of the largest malls in the metro area [1] containing a Selecto Chedraui hypermarket, Sanborn's, H&M, and Cinepolis. 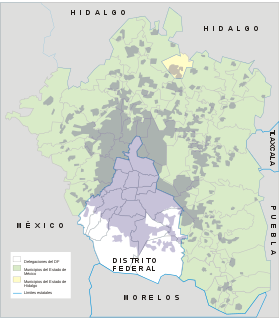 The State of Mexico is one of the 32 federal entities of Mexico. It is the most populous, as well as the most densely populated state. It is divided into 125 municipalities and its capital city is Toluca de Lerdo.

Chedraui is a publicly traded Mexican grocery store and department store chain which also operates stores in California, Arizona, and Nevada under the name El Super. It is traded on the Mexican Stock Exchange under the symbol CHEDRAUI.

Cuautitlán Izcalli is a city and municipality in the north of Mexico City, Mexico. The name comes from Náhuatl and means 'your house among the trees.'

Metro Cuatro Caminos is a station of the Mexico City metro network. It is the current north terminus of Line 2 and serves as a hub for regional transport from and into the State of México. 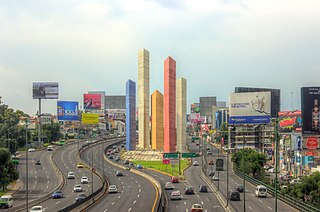 Naucalpan, officially Naucalpan de Juárez, is a city and municipality located just northwest of Mexico City in the adjoining State of Mexico.

A bullring is an arena where bullfighting is performed. Bullrings are often associated with Spain, but they can also be found in neighboring countries and the New World. Bullrings are often historic and culturally significant centres that bear many structural similarities to the Roman amphitheatre.

The Plaza de Toros México, situated in Mexico City, is the world's largest bullring. This 41,262-seat facility is usually dedicated to bullfighting, but many boxing fights have been held there as well, including Julio César Chávez's third bout with Frankie Randall. The Plaza México replaced the ancient bullring Toreo de la Condesa in the Condesa neighborhood that was overwhelmed by the rapid development of the Mexican population. It opened on 5 February 1946 and annually since then, that date marks the date of the Corrida de Aniversario. This building was built beside the football stadium Estadio de la Ciudad de los Deportes.

Lake Xochimilco is an ancient endorheic lake, located in the present-day Borough of Xochimilco in southern Mexico City. 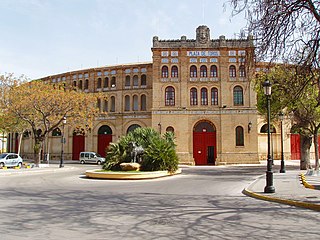 SM City Pampanga is a shopping mall owned and operated by SM Prime Holdings. It is located along the Jose Abad Santos Avenue in San Fernando and Mexico in the province of Pampanga. It has a land area of 316,000 m2 (3,400,000 sq ft) and a total gross floor area of 132,484 m2 (1,426,050 sq ft). It is the first SM Supermall in Central Luzon and is currently the second largest shopping mall in the Northern and Central Luzon. The shopping mall is composed of the Main Building, Annex 1, Annex 2 and Annex 3.

Paseo Reforma is a regional 425,174 ft² indoor mall located in Nuevo Laredo, Tamaulipas, Mexico south in the city's retail district. The shopping mall was built from 2007-2008 and was opened in May 2008 at a cost to developer Latin American Realty of $90 million. It was the first mall of its kind in Nuevo Laredo. The mall has three major anchors and has sub-anchors such as Famsa. The mall is situated in a lot with a total area of 1,356,468 ft² which includes 2,000 parking spaces and 6 pads for restaurants outside the mall.

The Anillo Periférico is the outer beltway of Mexico City.

Plaza de Toros Monumental de Aguascalientes is a bullring in the city of Aguascalientes, Mexico. It is currently used for bullfighting and concerts. The stadium holds 16,000 people and it was inaugurated on November 23, 1974. Its currently the 4th largest bullring in Mexico. 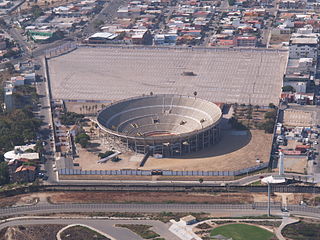 The Plaza Monumental de Tijuana, and commonly known in English as Bullring by the Sea, is a bullring in the city of Tijuana, in the state of Baja California, Mexico. It is currently used for bullfighting; the bullring has also been the scene for great boxing matches, concerts, cultural, and sporting events that have benefited the Tijuana community greatly. The stadium holds 21,621 people and its opening was held on June 26, 1960. Located just 60 meters from the U.S. and Mexico borderline at Paseo Playas de Tijuana No.551, Sección Monumental, Tijuana, Baja California 22504.

Plaza de Toros de Valencia is a bullring in València, Spain. It was built between 1850 and 1859 in the neoclassical style, inspired by civil Roman architecture such as the Colosseum in Rome or the Arena of Nîmes (France). It was built by the Valencian architect Sebastián Monleón Estellés. Its structure is formed by a 48-sided polygon, with 384 external arches. It follows the so-called Neo-Mudéjar style.

Antea LifeStyle Center or simply Antea is a shopping mall in the city of Querétaro, Mexico, which was opened in November 2013. It is the largest mall in Mexico and second largest in Latin America behind Albrook Mall in Panama. Construction began in June 2011 and the mall opened in October 2013 for the first phase, which has a reported cost of $1 billion and will have a total area of 271,000 m2 of construction.

Parque Delta is an enclosed shopping mall in Colonia Piedad Narvarte in Mexico City, at the southeast corner of Colonia Roma.

Angelópolis Lifestyle Center, is a high-level shopping mall located in Puebla, Mexico. It covers more than 78,000 square meters. The mall was designed by the Sordo Madaleno group and developed as a public-private partnership.