He played most of his career at SÍF Sandavágur and after they merged with MB Miðvágur he played with the club which was a result of the merger, FS Vágar. He was an active football player until 1997, after that he just played a few matches and played his last match in 2007, just before the club was re-established into 07 Vestur after a merger between FS Vágar 2004 and SÍ Sørvágur.

Nielsen played in an August 1988 friendly match against Iceland, the country's first FIFA-recognized match. He scored the very first Faroese goal after FIFA recognition, in a game, which also turned out to be the first ever official victory for the Faroe Islands, winning 1-0 in a friendly over Canada in April 1989.

Torkil claimed his place in world football history for his goal in the 1992 European championship qualifying shock 1-0 defeat of Austria in September 1990, which also was the Faroe Islands' first competitive match. His final match was a June 1993 World Cup qualifying match against Czechoslovakia. He earned 18 caps, scoring 2 goals. [1]

During and after his football career, Torkil Nielsen plays chess with the club Sandavágs talvfelag. [2] [3] He was a three-time individual champion of the Faroes in 1984, 1986 and 1988; and participated three times in the Chess Olympiad as a member of Faroese chess national team - in 1982 in Lucerne, Switzerland, and in 1984 and 1988 in Thessaloniki, Greece.

Two of Torkil Nielsen's sons, Rógvi (born 1992) and Høgni Egilstoft Nielsen (born 1997) are also football players as well as chess players, just like their father. His elder son, Rógvi Egilstoft Nielsen, is also a notable football and chess player. He is a defender for EB/Streymur football club and represented Faroes at U-19 level. [4] He was individual chess champion of the Faroes in 2012, 2015 and 2016. He is rated 2334 at the World Chess Federation as of April 2016. [5] His younger son, Høgni Egilstoft Nielsen, was considered among the most promising chess players of Scandinavia in his age group. In 2014, he won the Faroese Chess Championship for adults at the age of 16, and became the youngest ever to win the championship. Høgni was also the first player ever who won all matches played in a Faroese Chess Championship. [6] Høgni also plays football as a defender for 07 Vestur and also played 10 national matches for the Faroe Islands national football team at U-17 level in 2013. [7] Høgni is rated 2295 at the World Chess Federation as of April 2016. [8] 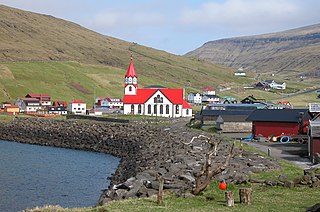 Sandavágur is a city on the south coast of the Faroese island of Vágar. The name Sandavágur means sandy bay and refers to the sandy beach which used to be much larger than present. From one point in Sandavágur you can get a view of all the southern islands in the Faroes. Sandavágur used to be a municipality until 1 January 2009, when it fused together with the neighbour village Miðvágur into the new Vágar municipality.

B71 (Sandoy) is a Faroese sports club, playing their home games Inni í Dal, Sandur. Teams are made up of players from all the towns on the island of Sandoy.

07 Vestur is a Faroese football club, which was founded in 2007. It is located in Sandavágur and Sørvágur on Vágar island.

Christian Høgni Jacobsen is a Faroese football striker, who lastly played for NSÍ. Jacobsen has also played for HB, and B68. He has been the topscorer of the Faroe Islands Premier League 3 times. Jacobsen had spells in Denmark with Esbjerg, Vejle, AB, and ÍF Føroyar. He has gained caps with Faroe Islands at senior level.

Páll á Reynatúgvu, is a Faroese politician, and former football player, currently serving as speaker of the Faroese Parliament. He was first elected in 1998, and again in 2002, when he assumed the position of Minister of Health and Social Affairs. After being re-elected in 2004, he became a member of the "Fíggjarnevndin".

2009 Faroe Islands Premier League, also known as Vodafonedeildin for sponsoring reasons, was the sixty-seventh season of top-tier football on the Faroe Islands. It began on 4 April 2009 and ended on 3 October 2009. EB/Streymur were the defending champions. The league was won by HB Tórshavn.

Fróði Benjaminsen is a Faroese international footballer who plays as a defender or midfielder for Skála ÍF. Benjaminsen previously played for HB Tórshavn, B68 Toftir, Fram Reykjavík and B36 Tórshavn. He has appeared a record number of times for the Faroe Islands, and captained the national team since 2008. In 2015, he retired from the national team, but continued to play for HB Tórshavn in 2016. On 16 August 2016, Benjaminsen came out of international retirement, and was included in the Faroe Islands squad against Hungary in the FIFA World Cup 2018 qualification.

2010 Faroe Islands Premier League, also known as Vodafonedeildin for sponsoring reasons, was the sixty-eighth season of top-tier football on the Faroe Islands. It began on 31 March 2010 with a match between NSÍ Runavík and ÍF Fuglafjørður and ended on 23 October 2010. HB Tórshavn were the defending champions, having won their 20th league championship last season.

Høgni Reistrup is a Faroese singer, musician, writer and scientist from Tórshavn, Faroe Islands. He is the co-writer of the book Exit Føroyar ; he wrote it together with Heri á Rógvi. The books was published in 2012 and created a major debate in the Faroe Islands and in Denmark about the problems the Faroe Islands were facing with population decline in the islands, where the biggest problems seemed to be that half of the young people who moved away to study abroad never moved back again; especially the women did not move back again. After a period of six years with negative net migration in the Faroe Islands, the country saw an increase in the population in 2014 and 2015.

Rógvi Poulsen is a Faroese footballer who currently plays for AB Argir. He has played four matches for the Faroe Islands national football team.

2012 Faroe Islands Premier League was the seventieth season of top-tier football on the Faroe Islands. For sponsorship reasons, it was known as Effodeildin. The season began on 24 March 2012 with a match between B36 Tórshavn and FC Suðuroy, and ended on 6 October 2012. EB/Streymur won their second league title. B36 Tórshavn were the defending champions.

Klæmint Andrasson Olsen is a Faroese footballer who plays as a striker for NSÍ Runavík. He is the all-time top scorer in the Faroe Islands Premier League. 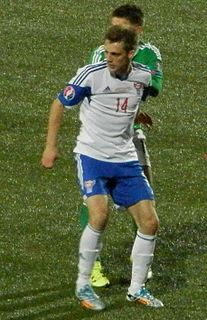 Sølvi Vatnhamar is a Faroese football player who currently plays for Víkingur Gøta and the Faroe Islands national football team. He is also working as a constructor. 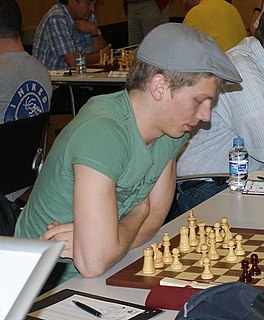 Helgi Dam Ziska is a Faroese chess player. He completed the requirements for the title Grandmaster (GM) at the 42nd Chess Olympiad on 12 September 2016. He is the first Faroese player to qualify for the Grandmaster title. Ziska is the top ranked and the highest ever rated player from his country, and has been rated number one amongst Faroese chess players since the age of 16. He has competed at the Chess Olympiad since 2006, representing the Faroe Islands.