The original Toronto Blizzard were formed in 1971 as the Toronto Metros playing in the North American Soccer League. [1] In 1975, the club became known as Toronto Metro-Croatia after being purchased by Toronto Croatia. In 1979, the club was purchased by the Global Television Network and renamed the Toronto Blizzard with Toronto Croatia becoming their own separate team again. [1] In September 1981, York-Hanover Sports Enterprises bought the franchise. [2] After the 1984 season, the NASL folded on March 28, 1985, putting an end to the original edition of the Blizzard, who ceased operations on April 24. [3] [4]

In June 1985, the owners of the Blizzard bought the rights to Dinamo Latino of the semi-professional National Soccer League [5] and announced the re-creating the Blizzard for the 1986 season, [2] [4] as NSL regulations did not permit the name change in the middle of the season.[ citation needed ] The club played in the NSL for the 1986 season. [6] In their first match, they defeated St. Catharines Roma by a score of 5-0. [7] They went on to win the regular season title, losing only one match, but lost in the playoffs championship final to Toronto Italia. [8] [7] They also won the NSL Cup, qualifying them for the National Soccer League Cup Championship with the winners from Quebec and British Columbia, where they defeated Vancouver Columbus Italia in the final to claim the title. [7] [9]

In 1987, the Blizzard joined the new professional Canadian Soccer League for its inaugural season. [6] In their debut CSL match, the Blizzard tied the North York Rockets, by a score of 1-1. [10]

They finished their first season in the CSL in third place in the East Division, qualifying for the playoffs, where they defeated the National Capital Pioneers in the first round before being defeated by the Hamilton Steelers in the semi-finals. [6] In 1988, after finishing second in the East Division, they were once again defeated by Hamilton in the semi-finals. [6]

In the 1989 season, they won their first Division title, but for the third consecutive year were defeated by Hamilton in the semi-finals. [6] During the 1989 season, they played a match against Brazilian club Flamengo, billed as the Canada Cup, which was the last international match for Flamengo footballer Zico, losing 2-0. [11]

In 1990, they finished top of the East Division for the second consecutive year, but were defeated in the first round by expansion club Kitchener Spirit. [6] In 1991, the Blizzard advanced to their first playoff championship final, but were defeated by the Vancouver 86ers, who won their fourth consecutive league championship. [6] They struggled in their final season in the CSL, finishing last in the league, failing to qualify for the playoffs for the first time. [6] The Blizzard had some financial issues, with the Vancouver 86ers owner paying playoff travel and accommodation expenses for the Blizzard. [12]

Following the 1992 season, the CSL folded. [13] The Blizzard decided to join the US-based American Professional Soccer League in 1993. [14] Due to financial difficulties and abysmal attendance, the team was forced to move out of Varsity Stadium to the city of Toronto owned Lamport Stadium roughly three quarters of the way through the season. [15] The club finished fifth in the regular season, failing to make the playoffs. [16]

Blizzard owner Karsten Von Wersebe had taken the club from the CSL to the APSL in hopes that the league would be awarded USA Division One status as FIFA had demanded that a national Division One quality soccer league exist in the USA as a condition of being awarded the 1994 FIFA World Cup. [3] When the U.S. Soccer Federation instead decided to create a new league, Major League Soccer, it was a heavy blow to Von Wersebe and the struggling Blizzard and the club folded immediately at the conclusion of the 1993 season. [3] After the team folder, they were replaced by the North York Rockets, who inherited some of the Blizzard players and played under the name Toronto Rockets. [17]

In 2001, there were plans for a new league called the Canadian United Soccer League, with the Toronto Blizzard, under a new ownership group, reported to be interested in a franchise, however, this league never came to frution. [18] Later in 2005, the city of Toronto was awarded a Major League Soccer franchise and there was speculation that the club would be named the Blizzard, however, the team was instead called Toronto FC. [18]

Today the Blizzard exists as a youth soccer club. In 2017, they formed a women's semi-professional team to play in League1 Ontario called the Toronto Azzurri Blizzard, [19] however, the team only lasted two seasons. [20]

C.N.S.C. Toronto Croatia is a Canadian soccer team based in Toronto, Ontario, that plays in the Supergroup Open Division in the Canadian Academy of Futbol. The team's colours are red, white and blue, similar to those of the Croatian national football team. 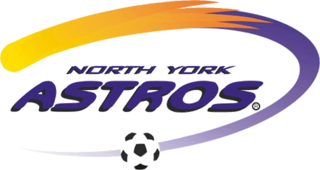 St. Catharines Roma Wolves, are a Canadian soccer team, founded in 1967. The team currently plays in the semi-professional League1 Ontario.The club is a former member of the Canadian Soccer League (CSL), where it fielded a professional team from 1998–2013, and now operates youth teams in the Peninsula Soccer League. Teams play out of Club Roma in St. Catharines, Ontario in the Niagara Peninsula. The team's colours are dark red and white, mimicking those of the famous Italian club A.S. Roma. 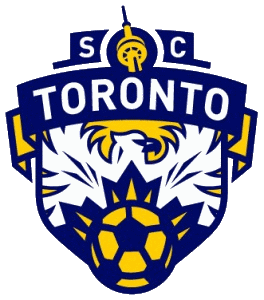 SC Toronto was a Canadian soccer team, founded in 1994. The team was a member of the Canadian Soccer League, and played its final home games at Lamport Stadium in the city of Toronto, Ontario. The club found success early on since its inception as the Toronto Supra in the Canadian National Soccer League, making the postseason in 1996, and the championship finals in 1997. With the creation of the Canadian Professional Soccer League in 1998, Toronto missed out in registering for the league which resulted in the club completing in local amateur leagues. Supra would eventually return to the professional level in 2001, entering the CPSL as an expansion franchise.

The Canadian soccer league system, also called the Canadian soccer pyramid, is a term used in soccer to describe the structure of the league system in Canada. The governing body of soccer in the country is the Canadian Soccer Association (CSA), which oversees the system and domestic cups but does not operate any of its component leagues. For practical purposes, Canadian teams are often members of leagues that are based primarily in the United States.

The Winnipeg Fury were a professional soccer team in Winnipeg, Canada. The team was part of the Canadian Soccer League from 1987 to 1992. They were one of four teams to participate in every season of the CSL. In 1993, they played in the Canadian National Soccer League.

The 1998Canadian Professional Soccer League season was the inaugural season under the Canadian Professional Soccer League name. The season began on May 31, 1998, and concluded on October 14, 1998, with the St. Catharines Wolves defeating the Toronto Olympians in 4-2 victory in a penalty shootout to claim the first CPSL Championship held at Centennial Park Stadium in Toronto, Ontario. Though Toronto was denied the treble they still managed to go undefeated the entire regular season, and dominate the league with the best offensive and defensive record.

The North York Rockets were a professional soccer team based in North York, Toronto, Ontario that competed in the original Canadian Soccer League. They were one of four teams to participate in every season of the CSL. Upon the demise of the CSL, the Rockets joined the Canadian National Soccer League.

The original Canadian Soccer League was a Division 1 professional soccer league that operated in Canada from 1987 to 1992. It was a nationwide league that had franchises in six provinces over the course of its history.

The Canadian Soccer League is a semi-professional league for exclusively Canadian soccer clubs primarily located in the province of Ontario, and is the successor league to the Canadian National Soccer League (CNSL). It is a Non-FIFA league previously sanctioned by the Canadian Soccer Association (CSA), but now affiliated with the Soccer Federation of Canada (SFC). As of 2020, it consists of five teams all located in Ontario, and is divided into two divisions, the First Division and Second Division. The season runs from May to October, with most games played on the weekend followed by a playoff format to determine the overall champion.

Pedro Kozak was an Argentine former footballer and football manager who played in the Argentine Primera División and the National Soccer League.

Nacional Latino was a soccer club based in Toronto, Ontario. The club played in the National Soccer League (NSL) in 1982 originally under the name Dinamo Latino. In 1985, the ownership of the Toronto Blizzard purchased Dinamo's franchise rights, and competed in the NSL until the 1986 season. In 1987, the Blizzard joined the Canadian Soccer League, and the previous ownership retained control of the club under the name Nacional Latino. The club's final season at the professional level lasted until the 1987 season.

The London Lasers were a professional soccer team in London, Ontario, Canada that played in the original Canadian Soccer League in 1990 and 1992.