Tribute is one of the new generation of ticket issuing systems introduced to ticket offices by British Rail during the mid-1990s, prior to the privatisation of the network. PC-based, it is one of several systems trialled with the aim of replacing the aging APTIS system. The original systems was developed by British Rail Business Systems, [1] and was first installed at London St Pancras on 21 January 1994. [2] By April 2005, around 250 terminals were in use [3] Following privatisation, development and support was provided to the Train Operating Companies (TOCs) by SchlumbergerSema, until they were bought by Atos in 2004.

Since the system was launched the software has undergone several major updates - release version 11 is now in use in ticket offices. [4]

Today the Tribute software is owned by Atos. Development is guided by representatives from a number of TOCs, and several industry call centres. [5] Development and systems integration work is undertaken by Atos. [5] 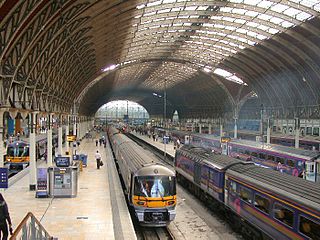 The railway system in Great Britain is the oldest railway system in the world. The first locomotive-hauled public railway opened in 1825, which was followed by an era of rapid expansion. Most of the track is managed by Network Rail, which in 2017 had a network of 15,811 kilometres (9,824 mi) of standard-gauge lines, of which 5,374 kilometres (3,339 mi) were electrified. These lines range from single to quadruple track or more. In addition, some cities have separate metro, light rail and tram systems. There are also many private railways, which are primarily short lines for tourists. The main rail network is connected with that of continental Europe by the Channel Tunnel and High Speed 1, which fully opened in 1994 and 2007 respectively.

National Rail (NR) in the United Kingdom is the trading name licensed for use by the Rail Delivery Group, an unincorporated association whose membership consists of the passenger train operating companies (TOCs) of England, Scotland, and Wales. The TOCs run the passenger services previously provided by the British Railways Board, from 1965 using the brand name British Rail. Northern Ireland, which is bordered by the Republic of Ireland, has a different system. National Rail services share a ticketing structure and inter-availability that generally do not extend to services which were not part of British Rail. 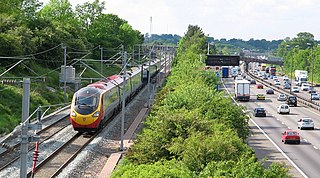 Transport in the United Kingdom is facilitated with road, air, rail, and water networks. A radial road network totals 29,145 miles (46,904 km) of main roads, 2,173 miles (3,497 km) of motorways and 213,750 miles (344,000 km) of paved roads. The National Rail network of 10,072 route miles (16,116 km) in Great Britain and 189 route miles in Northern Ireland carries over 18,000 passenger and 1,000 freight trains daily. Urban rail networks exist in Belfast, Birmingham, Cardiff, Edinburgh, Glasgow, Liverpool, London, Manchester and Newcastle. There are many regional and international airports, with Heathrow Airport in London being one of the busiest in the world. The UK also has a network of ports which received over 558 million tons of goods in 2003–2004. Transport is the largest source of greenhouse gas emissions by the United Kingdom.

Network Rail is the owner and infrastructure manager of most of the railway network in Great Britain. Network Rail is an arm's length public body of the Department for Transport with no shareholders, which reinvests its income in the railways.

The Privatisation of British Rail was the process by which ownership and operation of the railways of Great Britain passed from government control into private hands. Begun in 1994, it had been completed by 1997. The deregulation of the industry was initiated by EU Directive 91/440 in 1991, which aimed to create a more efficient rail network by creating greater competition.

A train operating company (TOC) is a business operating passenger trains on the railway system of Great Britain under the collective National Rail brand. TOCs have existed since the privatisation of the network under the Railways Act 1993. 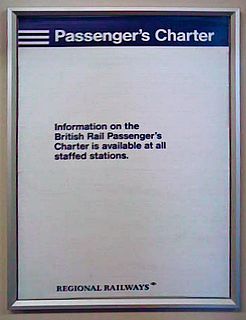 British Rail was the brand image of the nationalised railway owner and operator in Great Britain, the British Railways Board, used from 1965 until its breakup and sell-off from 1993 onwards.

The Integrated Electronic Control Centre (IECC) was developed in the late 1980s by the British Rail Research Division for UK-based railway signalling centres, although variations exist around the world. It is the most widely deployed VDU based signalling control system in the UK, with over 50 workstations in control centres that manage many of the most complex and busy areas of the network.

Overground Network was a branding initiative launched in 2003 by the Strategic Rail Authority (SRA) and Transport for London (TfL), the public transport authority in London, England. Its aim was to encourage use of National Rail services in South London. The project was a partnership between the SRA, TfL, three train operating companies, the South and West London Transport Conference (SWELTRAC) and the South East London Transport Strategy (SELTRANS). The scheme is no longer being promoted and the Overground Network project has since been abandoned.

The National Location Code (NLC) is a four-digit number allocated to every railway station and ticket issuing point in Great Britain for use with the ticketing system on the British railway network. They are used in the issue of tickets and for accounting purposes. They are a subset of the NLCs created by British Rail, which are based on four "main" digits plus two supplementary digits.

Sema Group plc was an Anglo-French IT services company. It was listed on the London Stock Exchange and was a constituent of the FTSE 100 Index. It was acquired by Schlumberger in 2001.

CAP Group was a British software house. Computer Analysts and Programmers Ltd (CAP) was founded in May 1962 and grew to be one of the foremost IT companies in the UK before merging with French company Sema-Metra in 1988 to form Sema Group. 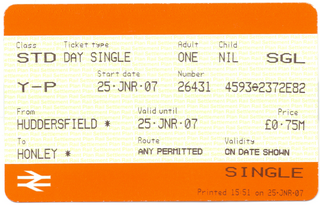 The Atos Worldline FASTticket system is a passenger-operated, self-service railway ticket issuing system, developed by the Guildford-based company Shere Ltd and first introduced on a trial basis in Britain in 1996, shortly after privatisation. It has been developed and upgraded consistently since then, and is now used by seven Train Operating Companies (TOCs) as their primary self-service ticket issuing system. Other TOCs have FASTticket machines at some of their stations, sometimes supplementing other systems.

The Scheidt & Bachmann Ticket XPress system is a passenger-operated self-service railway ticket issuing system developed and manufactured by the German systems development and production group Scheidt & Bachmann GmbH, based in the city of Mönchengladbach. Since the first trial installations in 2003, seven train operating companies (TOCs) in Great Britain have adopted the system as their main passenger-operated ticket vending method, while four others have installed machines at certain stations on their networks. More than 1,500 machines are in place across the country, and more than 850 stations have one or more. Machines can accept cash and/or payment cards and can sell most National Rail tickets. 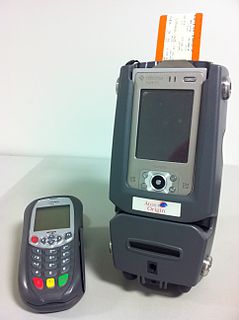 AVANTIX Mobile ("AVB") is a portable railway ticket issuing system used across the British railway network from 2001 to 2017.

Passenger rail franchising in Great Britain was the system of contracting the operation of the passenger services on the railways of Great Britain to private companies, between 1996 and 2020.

Avantix B8070, more commonly known as Avantix MultiTicket was a passenger-operated railway ticket issuing system, installed at British railway stations from 1999 onwards. The machines were available as upgrades to the Ascom B8050 Quickfare or as new build.

A rail operating centre (ROC) is a building that houses all signallers, signalling equipment, ancillaries and operators for a specific region or route on the United Kingdom's main rail network. The ROC supplants the work of several other signal boxes which have thus become redundant.