Trishna is a Swan 37 yacht belonging to the Corps of Engineers of the Indian Army. The name Trishna means “to thirst for” in the Sanskrit language. [1] The 1970-vintage boat, earlier known as Guinevere of Sussex, was purchased in 1984 from the United Kingdom. The yacht has since been used for long distance ocean sailing and training. The first of the yachts' journeys after it was acquired was its voyage from Gosport to Mumbai, India. Subsequently, the yacht embarked on its most notable voyage, the circumnavigation of the globe from 1985 to 1987. This was the first such achievement by an Indian crew. [2] In subsequent years, the yacht has been used for international cruises primarily in the Indian Ocean region and is currently still operational.

The Indian Army Engineers have been in the forefront of adventure activities in the Country, whether on land, sea or air. They have been the pioneers in Ocean Cruising in India. [3]

The Sapper Adventure Foundation had sponsored a sailing expedition from Bombay to Bandar Abbas, Iran in 1977 [4] in an 20-foot 1909-vintage wooden Seabird [5] Class sailboat Albatross to test the sailing capabilities of the sailors of the Corps of Engineers and a precursor to the circumnavigation of the globe by the Sappers on Trishna. The 68-day 7,000 km voyage to Bandar Abbas was one of the early major ventures by the Corps. [6]

Purchase of boat and sail from Gosport, England to Bombay, India

[7] The planning for the circumnavigation commenced in early 1980s and finally took off in 1984 when a team of officers from the Corps of Engineers flew to the U.K. to buy a boat and sail it back to India. Limited funds dictated the Sapper Adventure Foundation to opt for the purchase of a second-hand sailboat for the venture. After an extensive survey of the second-hand boat market in the U.K., the 1970-vintage Swan 37 boat Guinevere of Sussex was shortlisted, which was based at Brighton. [8] After purchase of the yacht, it was sailed by the crew to the Joint Services Sailing Center, Gosport, U.K., now known as the Joint Services Adventure Sail Training Center, [9] where it underwent minor repairs and partial essential re-fit to make it sail-worthy for the voyage back to India. The crew also underwent sail training, which was organised under the aegis of the Royal Engineers . Major Ron Gravels, ex-Royal Engineers, was engaged and he undertook a month-long sail training program for the crew on the Solent, English Channel crossings to Cherbourg culminating in a sail to the ports of Guernsey and Alderney in the Channel Islands. [10]

The team to sail the boat back from Gosport, United Kingdom to Bombay, India consisted of the following members: [8]

Maj A. K. Singh was handicapped. His leg had been amputated above the knee after a hang gliding accident in 1981. [15]

Note: The Goodwill Sailing Expedition 1994-1995 was the first occasion when a lady member, 2/Lt. Deepanita Dass, was included as a crew member in any Indian sailing expedition. [19]

The Indian Army Corps of Engineers celebrated the silver jubilee of the historic completion of the First Indian circumnavigation on 10 January 2012 by again sailing Trishna across Mumbai harbour to the Naval Sailing Club, Colaba, Mumbai, the place from where she had set off on its journey in 1985. [24] 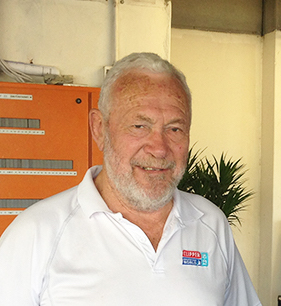 Sir William Robert Patrick Knox-Johnston is a British sailor. In 1969, he became the first person to perform a single-handed non-stop circumnavigation of the globe. Along with Sir Peter Blake, he won the second Jules Verne Trophy, for which they were also named the ISAF Yachtsman of the Year award. In 2007, at the age of 67, he set a record as the oldest yachtsman to complete a round the world solo voyage in the Velux 5 Oceans Race.

Bernard Moitessier was a French sailor, most notable for his participation in the 1968 Sunday Times Golden Globe Race, the first non-stop, singlehanded, round the world yacht race. With the fastest circumnavigation time towards the end of the race, Moitessier was the likely winner for the fastest voyage, but he elected to continue on to Tahiti and not return to the start line in England, rejecting the idea of the commercialization of long distance sailing. He was a French national born and raised in Vietnam, then part of French Indochina. 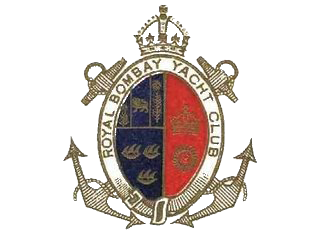 The Royal Bombay Yacht Club (RBYC) is one of the premier gentlemen clubs which was founded in 1846 in Colaba, an area of Mumbai in India. The building was designed by John Adams, who also designed the nearby Royal Alfred Sailors' Homes, and was completed in 1896.

INS Tarangini is a three-masted barque, commissioned in 1997 as a sail training ship for the Indian Navy. She is square rigged on the fore and main masts and fore-and-aft rigged on the mizzen mast. She was constructed in Goa to a design by the British naval architect Colin Mudie, and launched on 1 December 1995. In 2003-04, she became the first Indian naval ship to circumnavigate the globe.

Lin Pardey and Larry Pardey (1939-2020) are sailors and writers, known for their small boat sailing. The Pardeys sailed over 200,000 miles together, circumnavigating the world both east-about and west-about, and have published numerous books on sailing.

The Indian Army Corps of Engineers provides combat engineering support, develops infrastructure for armed forces and other defence organisations and maintains connectivity along the borders, besides helping the civil authorities during natural disasters. College of Military Engineering, Pune (CME) is the premier technical and tactical training institution of the Indian Army Corps of Engineers. 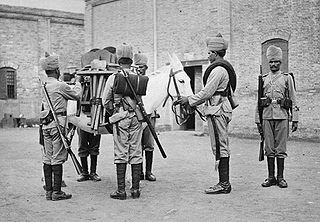 The Bombay Engineer Group, or the Bombay Sappers as they are informally known, are a regiment of the Corps of Engineers of the Indian Army. The Bombay Sappers draw their origin from the erstwhile Bombay Presidency army of the British Raj. The group has its centre in Khadki, Pune in Maharashtra state. The Bombay Sappers have gone on to win many honours and awards, both in battle and in peacetime, throughout the 19th and 20th centuries, both before and after Independence. The gallantry awards won include the British Victoria Cross and the French Legion of Honour before independence, as well as the Param Vir Chakra and Ashok Chakra as part of Independent India. The Group has also made its mark in peacetime activities such as sport, adventure, disaster relief, aid to civil authority and prestigious construction projects.

Hal Roth was an American sailor and author. In 1971 he was awarded the Blue Water Medal of the Cruising Club of America. He died of lung cancer.

Solo is an Australian ex-ocean racing yacht, winning over 80 races during her eight-year racing career, all on the east coast of Australia. Solo has circumnavigated the world three times, circumnavigated Australia twice and was charted for two Antarctic expeditions. All of these achievements plus many more have earned her the title "The lady of the sea". 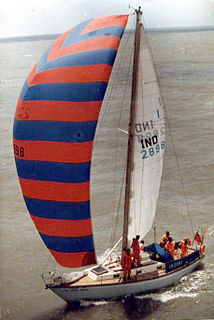 The first Indian circumnavigation in a sail boat was undertaken in 1985-1987 by a team comprising officers of the Indian Army Corps of Engineers on yacht Trishna, a 1970-vintage Swan 37 sloop.

INSV Mhadei is a sail training boat of the Indian Navy. On 19 May 2010 as he sailed Mhadei into Mumbai harbour, Commander Dilip Donde became the first Indian national to complete a single-handed circumnavigation under sail, in an Indian-built boat. He sailed from Mumbai on 19 August 2009 and returned to Mumbai after four stops on 19 May 2010. It was later used by Abhilash Tomy for his own single-handed, unassisted, non-stop circumnavigation under sail. 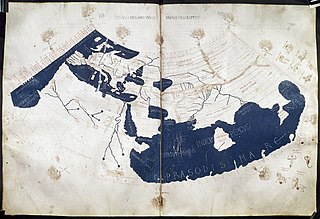 The European-Asian sea route, commonly known as the sea route to India or the Cape Route, is a shipping route from the European coast of the Atlantic Ocean to Asia's coast of the Indian Ocean passing by the Cape of Good Hope and Cape Agulhas at the southern edge of Africa. The first recorded completion of the route was made in 1498 by Portuguese explorer Vasco da Gama, the admiral of the first Portuguese Armadas bound eastwards to make the discovery. The route was important during the Age of Sail, but became partly obsolete as the Suez Canal opened in 1869.

INSV Tarini is the second sailboat of the Indian Navy. She was constructed at Aquarius Shipyard located in Goa. After undergoing extensive sea trials, she was commissioned to Indian Navy service on 18 February 2017.

The Mhadei class are ocean going sail training boats of the Indian Navy & include INSV Mhadei and INSV Tarini as the 2 sail boats of the class. On 19 May 2010 as he sailed Mhadei into Mumbai harbour, Commander Dilip Donde became the first Indian national to complete a single-handed circumnavigation under sail, in an Indian-built boat. He sailed from Mumbai on 19 August 2009 and returned to Mumbai after four stops on 19 May 2010. It was later used by Abhilash Tomy for his own single-handed, unassisted, non-stop circumnavigation under sail.

Navika Sagar Parikrama was a circumnavigation of the globe by female officers of the Indian Navy. The six-member all-woman team circumnavigated and managed the whole operation in their first-ever global journey, on INSV Tarini. The voyage lasted 254 days, from 10 September 2017 to 21 May 2018, with only 4 port calls, in Fremantle, Australia; Lyttelton, New Zealand; Port Stanley, Falkland Islands; and Cape Town, South Africa, and a forced technical halt at Port Louis, Mauritius, crossing the equator twice and passing through 3 oceans. The voyage was originally set to start on September 5, 2017, but a 5-day delay happened so that Nirmala Sitharaman, who was recently appointed defense minister, could flag off the crew. The boat returned to INS Mandovi in Goa after travelling 21,600 nautical miles. The voyage was showcased in Tarini, a documentary jointly produced by National Geographic and the Indian Navy, premiering at an event at Lady Shri Ram College on 8 March to mark International Women's Day. The voyage prompted National Geographic to start the "Girls Who Sailed" campaign, to tell tales of "grit and determination". 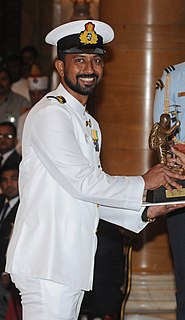 Commander (Dr.) Abhilash Tomy, KC, NM is a retired Indian naval officer and yachtsman. In 2013, he became the first Indian to complete a solo, non-stop circumnavigation of the world under sail, and he also competed in the 2018 Golden Globe Race. On 10 January 2021, he retired from the Navy by applying for premature retirement from service as he wanted to focus on participating in the Golden Globe Race in 2022.

Captain Dilip Donde is a retired Indian Naval officer and the first Indian to complete a solo, unassisted circumnavigation of the globe under sail. From April 2006 to May 2010 he planned and executed Project 'Sagar Parikrama' which involved constructing a sailboat in India and then sailing it around the world. He was the hundred and ninetieth person to complete the journey solo.