Trism is a puzzle game for the Apple iPhone developed by American studio Demiforce. The game and developer made the news for being a rags to riches story. [1] [2] The game makes use of the iPhone's built in accelerometer, [3] and involves the sliding of colored triangular tiles called "trisms" in order to make matches of three or more. As soon as a match is made, the tiles disappear and, depending on the direction in which the iPhone is tilted, the gaps left behind will be filled.

The game has been compared to Bejeweled 2 ,[ by whom? ] although the developer has stated the gameplay is unique, and there is a patent pending. [4] [ as of? ]

This is the main gameplay mode in which the user slides the trisms on the screen diagonally or horizontally in order to create matches of three or more trisms; the remaining gaps left behind are then filled by the surrounding trisms depending upon the direction in which the iPhone is tilted. This is shown by the compass in the lower right hand corner. The more trisms matched together the greater the number of points generated. Once a certain number of points is generated, the player then advances a level. During gameplay the player can encounter certain special trisms, such as the locked trism, which prevents trisms that are on the same axis from being moved until it is removed by matching it. There is also the bomb trism that has a countdown which decreases with every successful movement made. This trism can be moved but must be removed by matching before the countdown finishes or the game will finish.

Terminism has the same basic gameplay as Infinism mode but with the addition of a timer. When the timer goes from green to red, called a timeout, a bomb or lock trism will spawn. In order to keep the timer green, matches must be made constantly. Unlike in Infinism, the bomb in Terminism is not counted on turn. It has a time limit. The bomb must be disarmed before it turns red, or the player will lose.

This is a puzzle mode whereby the player must eliminate all of the trisms in the fewest moves possible. This is done by tilting the iPhone in order to make them slide. There are 30 levels each increasing in difficulty. Some of them are solvable under par with a total score of up to -17.

Starshine mode is an unlockable game mode available for Infinism or Terminism. To unlock this in Infinism, the player must achieve one million points in one game. To unlock it in Terminism the player must score 500,000 points in a single game before getting a timeout. The objective of Starshine mode is to create large starshine chains to achieve an extreme number of points.

The game has achievements for completing certain tasks, such as earning over 500,000 points in terminism mode before getting a timeout. There are twenty-two achievements in all, which are posted on the user's profile on the online community.

Trism has won awards such as Best Casual Game from AppStoreApps.com, 1st on iLounge's Best Apps and Games, a Gold award from Pocket Gamer, Slide to Play's "Must have" award, one of Wired's "10 most awesome iPhone Apps of 2008," [5] and was an AIAS finalist for "Cellular game of the year". [6]

Collapse! is a series of tile-matching puzzle video games by GameHouse, a software company in Seattle, Washington. In 2007, Super Collapse! 3 became the first game to win the Game of the Year at the inaugural Zeebys. The series has been discontinued since 2015 due to RealNetworks shutting down its internal games studio.

Kirby Tilt 'n' Tumble is an action puzzle video game developed by HAL Laboratory and published by Nintendo for the Game Boy Color handheld video game console. It was released in Japan on August 23, 2000 and in North America on April 11, 2001. Due to the cartridge having a built-in accelerometer, it has a unique shape, as well as a unique transparent pink color in reference to Kirby.

Hexic is a 2003 tile-matching puzzle video game developed by Carbonated Games for various platforms. In Hexic, the player tries to rotate hexagonal tiles to create certain patterns. The game is available on Windows, Xbox 360, Xbox One Windows Phone and the web. Many clones are available for Android and iOS. The game was designed by Alexey Pajitnov, best known as the creator of Tetris. While most earlier releases of the game were developed by Carbonated Games, the most recent version released for Windows and Windows Phone is developed by Other Ocean. The name is a portmanteau of the words "hectic" and "hexagon". 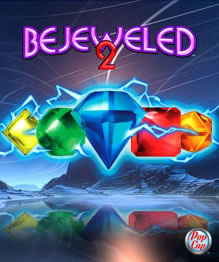 Bejeweled 2 is a tile-matching puzzle video game developed and published by PopCap Games. Released as a sequel to Bejeweled, Bejeweled 2 introduces new game mechanics such as Special Gems and extra game modes, along with new visuals and sounds. 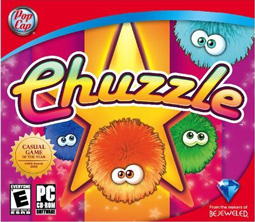 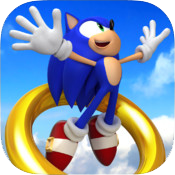 Sonic Jump is a vertical platform game developed by Hardlight and published by Sega for iOS and Android. On its original release, the app was released in Japan on February 21, 2005, and then North America USA, South America, resume Asia, Africa, and Europe UK worldwide in April 2007. It was then remade and released worldwide on iOS as a paid download on 18 October 2012, and then released for Android on 21 December 2012.

Super Monkey Ball is a series of arcade platform video games initially developed by Amusement Vision and published by Sega. The series debuted in 2001 with the arcade game Monkey Ball, which was ported to GameCube as Super Monkey Ball later that year. Several sequels and ports have been released.

Sunflat Games is a video game company based in Japan. While they design games for the PC, they are best known for their successful line of iOS games. The company has begun converting their games for use on the Android-based HTC Dream. The games can be found on Google Play, and some have recently been added to the Mac App Store and Windows Phone 7 Marketplace.

Rock Band is a music video game released for the iOS. It was co-developed by EA Montreal and Harmonix, and was published by Electronic Arts and MTV Games. The game was released as a part of the Rock Band series for download through the App Store in several regions on October 19, 2009. On May 2, 2012, RockBandAide announced that EA intended to discontinue Rock Band with servers being disconnected and support being dropped on May 31, 2012. However, EA stated that the message was "sent in error" and the app would remain available to those who purchased the app. It was later announced that due to an expiring contract with Harmonix the game would be removed from the App Store. This occurred on July 31, 2012, and the game is now currently unavailable; though users who have previously downloaded the game can continue to play it.

Bejeweled 3 is a tile-matching puzzle video game developed and published by PopCap Games. It is the fifth game of the Bejeweled series. The game was released as a download for Windows and Mac on December 7, 2010, later being ported to the PlayStation 3, Xbox 360, Xbox One and Xbox Series X/S through the backwards compatibility program, Nintendo DS, iOS, Android, Java ME, and Windows Phone. It features four new game modes, as well as the four standard ones from Bejeweled and Bejeweled 2. The Xbox 360 version of the game was available through the EA Play subscription service alongside Bejeweled 2.

Fruit Ninja is a video game developed by Halfbrick. It was released April 21, 2010 for iPod Touch and iPhone devices, July 12, 2010 for the iPad, September 17, 2010 for Android OS devices. It was released for Windows Phone, on December 22, 2010. Also, in March 2011, versions for Samsung's Bada and Nokia's Symbian began to be distributed on their respective application channels. Just prior to E3 2011 Fruit Ninja Kinect, which utilizes the Kinect peripheral, was released for the Xbox 360 on August 10, 2011. Fruit Ninja was also released for Windows 8, on June 7, 2012. Versions with alternative names exist, such as Fruit Ninja HD on the iPad, Fruit Ninja THD for Nvidia Tegra 2–based Android devices, Fruit Ninja VR for HTC Vive and PlayStation 4, and an arcade version called Fruit Ninja FX. In the game, the player must slice fruit that is thrown into the air by swiping the device's touch screen with their finger(s) or in the case of the Xbox 360 version, the player's arms and hands. It features multiple gameplay modes, leaderboards and multiplayer.

3D Pixel Racing is an arcade-style racing game developed by Vidia, published by Microforum Games and released on July 14, 2011 in the United States, and September 8, 2011 in Europe. The Game was released as a downloadable game on WiiWare and in the App Store for iOS devices. 3D Pixel Racing heavily capitalizes on its graphical uniqueness. Unlike most 3D games, every object in 3D Pixel Racing is made of multi-colored voxels that are reminiscent of old 8-bit games from the 1970s and 80's.

Katamari Amore is a third-person puzzle-action video game that is published and developed by Namco Bandai Games for iOS. With rumors beginning in March 2011, the game was revealed in a pre-release state at E3 2011, and was released to the public on September 29. Katamari Amore is the second game of the Katamari franchise to be released on iOS, and features Game Center integration.

10000000 is a hybrid puzzle-role-playing game developed by Luca Redwood under the company name EightyEightGames, released initially for iOS devices in August 2012, and later for Microsoft Windows and OS X computers via Steam in January 2013, and to Android and Linux systems in March 2013.

Real Racing 3 is a racing game, developed by Firemonkeys Studios and published by Electronic Arts for iOS, Android, Nvidia Shield and BlackBerry 10 devices. It was released on iOS and Android on 28 February 2013 under the freemium business model; it was free to download, with enhancements available through in-app purchases. Over time and despite an expensive virtual economy ingame, the developers began to tolerate the use of playing with time zones in order for the players to watch unlimited ads to get free gold.

The Groove Coaster series is an iOS / Android and arcade rhythm game franchise developed by Matrix Software and published by Taito. 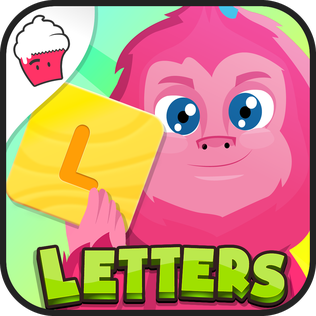 Letters of Gold is a word puzzle game released by Brazilian studio Cupcake Entertainment on October, 2013 for Facebook. In March 2015, the game reached 400 levels. The game is periodically updated, adding new "episodes" and levels. 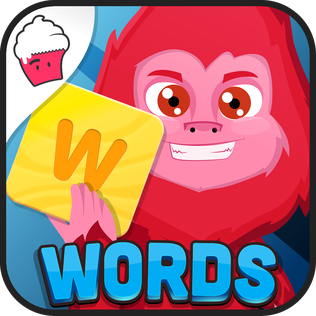 Words of Gold is a scrabble puzzle game released by Brazilian studio Cupcake Entertainment in November 2014 for Facebook and in early 2016 in iPhone and Android. It has over 360 levels. The game is periodically updated, adding new "episodes" and levels.