Tristiropsis acutangula is a tree species in the flowering plant family Sapindaceae. It grows naturally in the Malesian biogeographical region and in northern Australia. [1]

It is a large forest canopy tree growing up to 35 m high, and rarely to over 50 m. The trunk is buttressed at the base and has mainly smooth, or slightly roughened, dark brown bark. The compound leaves are arranged spirally up the branchlets with the leaflets opposite and symmetric. The small (up to 10 mm diameter) white to pale yellow or cream-coloured flowers occur as axillary inflorescences. The fleshy fruit is 20–30 mm long, dark yellow, green or brown in colour, containing a single seed more than 10 mm in diameter. [1]

Alectryon is a genus of about 30 species of trees and shrubs from the family Sapindaceae. They grow naturally across Australasia, Papuasia, Melanesia, western Polynesia, east Malesia and Southeast Asia, including across mainland Australia, especially diverse in eastern Queensland and New South Wales, the Torres Strait Islands, New Guinea, the Solomon Islands, New Caledonia, New Zealand, Vanuatu, Fiji, Samoa, Hawaii, Indonesia and the Philippines. They grow in a wide variety of natural habitats, from rainforests, gallery forests and coastal forests to arid savannas and heaths.

Guioa is a genus of about 78 rainforest tree species known to science, which constitute part of the plant family Sapindaceae. They have a wide distribution, ranging from throughout Malesia, in Burma, Cambodia, Vietnam, Thailand, Malay Peninsula, Borneo, Sumatra, Philippines, Java, Flores, Timor, Sulawesi, Moluccas, New Guinea, further southwards through the east coast of Queensland and New South Wales, Australia and further eastwards to the Pacific Islands, including Tonga, New Caledonia, Fiji and Samoa. 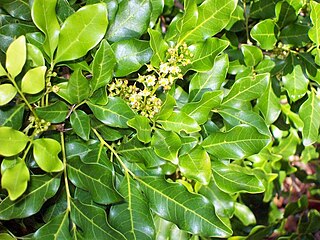 Toechima is a genus of small to medium-sized trees in the plant family Sapindaceae. The species are native to New South Wales, the Northern Territory and Queensland in Australia as well as New Guinea.

Arytera is a genus of about twenty–eight species known to science, of trees and shrubs and constituting part of the plant family Sapindaceae. They grow naturally in New Guinea, Indonesia, New Caledonia, Australia, the Solomon Islands, Vanuatu, Fiji, Samoa, Tonga; and the most widespread species and type species A. littoralis grows throughout Malesia and across Southeast Asia, from NE. India, southern China, Borneo, Malaysia, Singapore, Indonesia and the Philippines to as far east as New Guinea and the Solomon Islands.

Elattostachys is a genus of about 21 species of trees known to science, constituting part of the plant family Sapindaceae.

Peltophorum pterocarpum is a species of Peltophorum, native to tropical southeastern Asia and a popular ornamental tree grown around the world.

Jagera pseudorhus, commonly named foambark, is a species of rainforest trees, in the northern half of eastern Australia and in New Guinea, constituting part of the flowering plant family Sapindaceae. Named for the saponin foam that forms on the bark after heavy rain.

Sarcopteryx is a genus of about 12 rainforest tree species known to science, of the plant family Sapindaceae. They occur in Australia, New Guinea and the Moluccas.

Tristiropsis is a genus of about 14 flowering trees species, of the plant family Sapindaceae.

Dendrocnide peltata, commonly known simply as the stinging tree or jelaton, is a large tree in the nettle family Urticaceae. With the other species of the genus Dendrocnide, it is known for the stinging hairs which cover the whole plant and cause severe pain when touched. The specific epithet comes from the Latin pelta, referring to the peltate leaves. 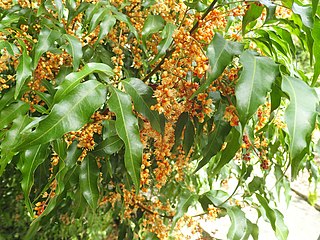 Lepiderema pulchella commonly known as fine-leaved tuckeroo , is a species of flowering plant in the family Sapindaceae and is endemic to coastal eastern Australia. It is a tree with pinnate, glossy light green leaves with four to fourteen leaflets, panicles of yellow-orange flowers and brown, spherical to three-lobed fruit.

Rhysotoechia is a genus of tropical rainforest trees, constituting part of the plant family Sapindaceae.

Tabernaemontana pandacaqui, known as windmill bush and banana bush, is a species of plant in the dogbane family Apocynaceae.

Chrysophyllum roxburghii is a plant species in the family Sapotaceae. It grows as a tree up to 30 metres (100 ft) tall, with a trunk diameter of up to 40 cm (16 in). The bark is grey to dark brown. Inflorescences bear up to 45 flowers. The fruit are brownish to purplish black, ripening yellow, round, up to 4 cm (2 in) in diameter. Its habitat is lowland forests from sea level to 700 metres (2,300 ft) altitude. C. roxburghii grows naturally in Madagascar, India, Sri Lanka, Thailand, Cambodia, Laos, Vietnam, Malaysia, Brunei, Indonesia, the Philippines, Papua New Guinea, the Solomon Islands and Queensland.

Lepidopetalum is a genus of six species of trees known to science, constituting part of the plant family Sapindaceae. 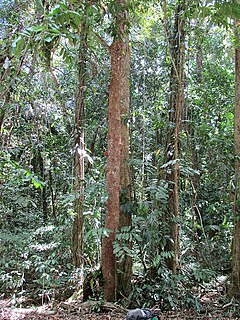 Dysoxylum parasiticum, known as yellow mahogany, is a species of rainforest trees in the family Meliaceae. The specific epithet parasiticum is from the Latin meaning "parasitic", referring to the idea that the flowers are parasitic on another tree species.

Dendrobium canaliculatum, commonly known as the brown tea tree orchid or thin tea tree orchid, is an epiphytic or lithophytic orchid in the family Orchidaceae. It has cone-shaped or onion-shaped pseudobulbs, up to six deeply channelled, dark green leaves and up to thirty star-shaped, light brown to caramel-coloured white or greenish to apricot-coloured flowers with darker tips. It grows in tropical North Queensland and New Guinea.

Fontainea subpapuana is a small tree endemic to Papua New Guinea in the family, Euphorbiaceae, which grows to a height of 7 m.