The trisynaptic circuit, or trisynaptic loop is a relay of synaptic transmission in the hippocampus. The circuit was initially described by the neuroanatomist Santiago Ramon y Cajal, [1] in the early twentieth century, using the Golgi staining method. After the discovery of the trisynaptic circuit, a series of research has been conducted to determine the mechanisms driving this circuit. Today, research is focused on how this loop interacts with other parts of the brain, and how it influences human physiology and behaviour. For example, it has been shown that disruptions within the trisynaptic circuit leads to behavioural changes in rodent and feline models. [2]

The entorhinal cortex (EC) is a structure in the brain located in the medial temporal lobe. The EC is composed of six distinct layers. The superficial (outer) layers, which includes layers I through III, are mainly input layers that receive signals from other parts of the EC. The deep (inner) layers, layers IV to VI, are output layers, and send signals to different parts of the EC and the brain. Layers II and III project to the CA3 area of the hippocampal formation (via the perforant path) and to the granule cells of the dentate gyrus, respectively.

The dentate gyrus (DG) is the innermost section of the hippocampal formation. The dentate gyrus consists of three layers: molecular, granular, and polymorphic. Granule neurons, which are the most prominent type of DG cells, are mainly found in the granular layer. These granule cells are the major source of input of the hippocampal formation, receiving most of their information from layer II of the entorhinal cortex, via the perforant pathway. Information from the DG is directed to the pyramidal cells of CA3 through mossy fibres. Neurons within the DG are famous for being one of two nervous system areas capable of neurogenesis, the growth or development of nervous tissue.

The CA3 is a portion of the hippocampal formation adjacent to the dentate gyrus. Input is received from the granule cells of the dentate gyrus through the mossy fibres. The CA3 is rich in pyramidal neurons (like those found throughout the neocortex), which project mainly to the CA1 pyramidal neurons via the Schaffer collateral pathway. The CA3 pyramidal neurons have been analogized as the "pacemaker" of the trisynaptic loop in the generation of hippocampal theta rhythm. One study [4] has found that the CA3 plays an essential role in the consolidation of memories when examining CA3 regions using the Morris water maze.

The CA1 is the region within the hippocampus between the subiculum, the innermost area of the hippocampal formation, and region CA2. The CA1 is separated from the dentate gyrus by the hippocampal sulcus. Cells within the CA1 are mostly pyramidal cells, similar to those in CA3. The CA1 completes the circuit by feeding back to the deep layers, mainly layer V, of the entorhinal cortex.

The cingulate gyrus plays a key role in the limbic system's emotion formation and processing. The cingulate cortex is separated into an anterior and a posterior region, which corresponds to areas 24, 32, 33 (anterior) and 23 (posterior) of the Brodmann areas. The anterior region receives information mainly from the mamillary bodies while the posterior cingulate receives information from the subiculum via the Papez circuit.

The thalamus is a bundle of nuclei located between the cerebral cortex and the midbrain. Many of the thalamic nuclei receive inputs from the hippocampal formation. The mammillothalamic tract relays information received from the mamillary bodies (via the fornix) and transmits it to the anterior nuclei of the thalamus. Research has shown that the thalamus plays a key role with respect to spatial and episodic memories. [6]

The amygdala is an almond-shaped group of nuclei found deep and medially within the temporal lobes of the brain. Known to be the area of the brain responsible for emotional reaction, but plays an important role in processing of memory and decision making as well. It is part of the limbic system. The amygdala projects to various structures in the brain including the hypothalamus, the thalamic reticular nucleus, and more.

Relationship with other physiological systems

It has been proposed that the trisynaptic circuit is responsible for the generation of hippocampal theta waves. These waves are responsible for the synchronization of different brain regions, especially the limbic system. [9] In rats, theta waves range between 3–8 Hz and their amplitudes range from 50 to 100 μV. Theta waves are especially prominent during ongoing behaviors and during rapid eye movement (REM) sleep. [10]

There are physiological and psychological disorders related to prolonged exposure to hypoxic conditions. For example, sleep apnea [12] is a condition where there is partial, or complete, blockage of breathing during sleep. In addition, the respiratory system linked to central nervous system via base of brain. Thus, prolonged exposure to low oxygen concentration has detrimental effects on the brain.

Experimental research has shown that there are two prominent types of theta oscillation which are each associated with different related to a motor response. [13] Type I theta waves correspond with exploratory behaviours including walking, running, and rearing. Type II theta waves are associated with immobility during the initiation or the intention of initiation of a motor response. 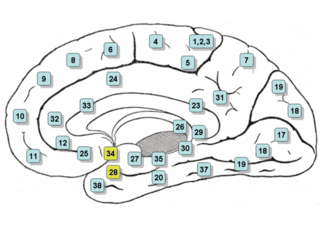 The entorhinal cortex (EC) is an area of the brain's allocortex, located in the medial temporal lobe, whose functions include being a widespread network hub for memory, navigation, and the perception of time. The EC is the main interface between the hippocampus and neocortex. The EC-hippocampus system plays an important role in declarative (autobiographical/episodic/semantic) memories and in particular spatial memories including memory formation, memory consolidation, and memory optimization in sleep. The EC is also responsible for the pre-processing (familiarity) of the input signals in the reflex nictitating membrane response of classical trace conditioning; the association of impulses from the eye and the ear occurs in the entorhinal cortex. 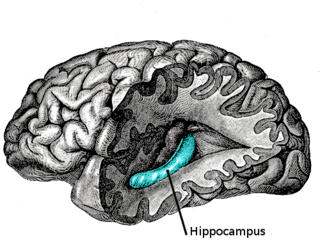 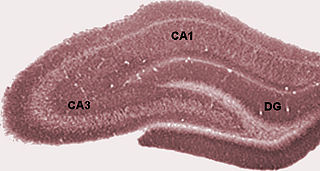 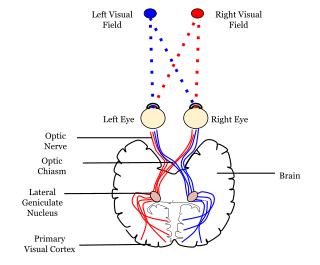 The Papez circuit, or medial limbic circuit, is a neural circuit for the control of emotional expression. In 1937, James Papez proposed that the circuit connecting the hypothalamus to the limbic lobe was the basis for emotional experiences. Paul D. MacLean reconceptualized Papez's proposal and coined the term limbic system. MacLean redefined the circuit as the "visceral brain" which consisted of the limbic lobe and its major connections in the forebrain – hypothalamus, amygdala, and septum. Over time, the concept of a forebrain circuit for the control of emotional expression has been modified to include the prefrontal cortex.

Theta waves generate the theta rhythm, a neural oscillation in the brain that underlies various aspects of cognition and behavior, including learning, memory, and spatial navigation in many animals. It can be recorded using various electrophysiological methods, such as electroencephalogram (EEG), recorded either from inside the brain or from electrodes attached to the scalp. 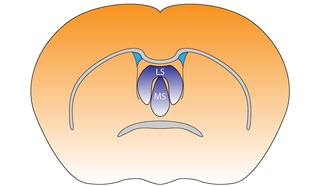 The septal area, consisting of the lateral septum and medial septum, is an area in the lower, posterior part of the medial surface of the frontal lobe, and refers to the nearby septum pellucidum.

In the brain, the perforant path or perforant pathway provides a connectional route from the entorhinal cortex to all fields of the hippocampal formation, including the dentate gyrus, all CA fields, and the subiculum.

In the hippocampus, the mossy fiber pathway consists of unmyelinated axons projecting from granule cells in the dentate gyrus that terminate on modulatory hilar mossy cells and in Cornu Ammonis area 3 (CA3), a region involved in encoding short-term memory. These axons were first described as mossy fibers by Santiago Ramón y Cajal as they displayed varicosities along their lengths that gave them a mossy appearance. The axons that make up the pathway emerge from the basal portions of the granule cells and pass through the hilus of the dentate gyrus before entering the stratum lucidum of CA3. Granule cell synapses tend to be glutamatergic, though immunohistological data has indicated that some synapses contain neuropeptidergic elements including opiate peptides such as dynorphin and enkephalin. There is also evidence for co-localization of both GABAergic and glutamatergic neurotransmitters within mossy fiber terminals. GABAergic and glutamatergic co-localization in mossy fiber boutons has been observed primarily in the developing hippocampus, but in adulthood, evidence suggests that mossy fiber synapses may alternate which neurotransmitter is released through activity-dependent regulation.

Hippocampus anatomy describes the physical aspects and properties of the hippocampus, a neural structure in the medial temporal lobe of the brain. It has a distinctive, curved shape that has been likened to the sea-horse monster of Greek mythology and the ram's horns of Amun in Egyptian mythology. This general layout holds across the full range of mammalian species, from hedgehog to human, although the details vary. For example, in the rat, the two hippocampi look similar to a pair of bananas, joined at the stems. In primate brains, including humans, the portion of the hippocampus near the base of the temporal lobe is much broader than the part at the top. Due to the three-dimensional curvature of this structure, two-dimensional sections such as shown are commonly seen. Neuroimaging pictures can show a number of different shapes, depending on the angle and location of the cut.

The fascia dentata is the earliest stage of the hippocampal circuit. Its primary input is the perforant path from the superficial layers of entorhinal cortex. Its principal neurons are tiny granule cells which give rise to unmyelinated axons called the mossy fibers which project to the hilus and CA3. The fascia dentata of the rat contains approximately 1,000,000 granule cells. It receives feedback connections from mossy cells in the hilus at distant levels in the septal and temporal directions. The fascia dentata and the hilus together make up the dentate gyrus. As with all regions of the hippocampus, the dentate gyrus also receives GABAergic and cholinergic input from the medial septum and the diagonal band of Broca. 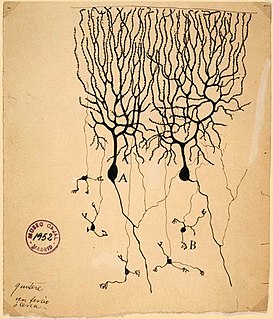 The name granule cell has been used for a number of different types of neuron whose only common feature is that they all have very small cell bodies. Granule cells are found within the granular layer of the cerebellum, the dentate gyrus of the hippocampus, the superficial layer of the dorsal cochlear nucleus, the olfactory bulb, and the cerebral cortex.

Sharp waves and ripples (SWRs) are oscillatory patterns in the mammalian brain hippocampus seen on an EEG during immobility and sleep. There are three major network oscillation patterns in the hippocampus: theta waves, SWRs and gamma waves. Gamma oscillations are found in all major brain structures, whereas theta and sharp waves are specific to the hippocampus and its neighbouring areas. SWRs are composed of large amplitude sharp waves in local field potential and associated fast field oscillations known as ripples. SWRs are shown to be involved in memory consolidation and the replay of wakefulness-acquired memory. These network oscillations are the most synchronous patterns in the brain, making them susceptible to pathological patterns such as epilepsy.

The supramammillary nucleus (SuM), or supramammillary area, is a thin layer of cells in the brain that lies above the mammillary bodies. It can be considered part of the hypothalamus and diencephalon. The nucleus can be divided into medial and lateral sections. The medial SuM, or SuMM, is made of smaller cells which release dopamine and give input to the lateral septal nucleus. The lateral SuM, or SuML, is made of larger cells that project to the hippocampus.