Triuridales was an order of flower plants that was used in the Cronquist system, in the subclass Alismatidae, with this circumscription:

In the classification system of Dahlgren the Triuridales contained the single family Triuridaceae and was the sole order in the superorder Triuridiflorae (also called Triuridanae).

The APG II system leaves the first of these two families unassigned in the clade monocots while the second is moved to order Pandanales. The name was a botanical name.

Pandanales, the pandans or screw-pines, is an order of flowering plants placed in the monocot clade in the Angiosperm Phylogeny Group and Angiosperm Phylogeny Web systems. Within the monocots Pandanales are grouped in the lilioid monocots where they are in a sister group relationship with the Dioscoreales. Historically the order has consisted of a number of different families in different systems but modern classification of the order is based primarily on molecular phylogenetics despite diverse morphology which previously placed many of the families in other groupings based on apparent similarity. Members of the order have a subtropical distribution and includes trees, shrubs, and vines as well as herbaceous plants. The order consists of 5 families, 36 genera and about 1,610 species. 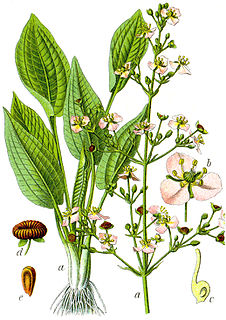 Alismatidae is a botanical name at the rank of subclass. Circumscription of the subclass will vary with the taxonomic system being used ; the only requirement being that it includes the family Alismataceae. It is a relatively new name: earlier systems, such as the Engler and Wettstein systems, used the name Helobiae for a comparable unit.

A system of plant taxonomy, the Thorne system of plant classification was devised by the American botanist Robert F. Thorne (1920–2015) in 1968, and he continued to issue revisions over many years (1968–2007).

Triuridaceae are a family of tropical and subtropical flowering plants, including nine genera with a total of ca 55 known species. All members lack chlorophyll and are mycoheterotrophic. The heterotrophic lifestyle of these plants has resulted in a loss of xylem vessels and stomata, and a reduction of leaves to scales.

Paulus Johannes Maria "Paul" Maas is a botanist from the Netherlands and a specialist in the flora of the neotropics. Maas has identified and named about two hundred fifty plants from the Burmanniaceae, the Costus Family (Costaceae), the Gentian Family (Gentianaceae), the Bloodwort Family (Haemodoraceae), the Banana Family (Musaceae), the Olacaceae, the Triuridaceae, and the Ginger Family (Zingiberaceae).

This is the named Melchior system, "a reference in all taxonomic courses", detailing the taxonomic system of the Angiospermae according to A. Engler's Syllabus der Pflanzenfamilien (1964), also known as "modified or updated" Engler system.

Kupea martinetugei is a species of plant in the Triuridaceae family. It is endemic to Cameroon. Its natural habitat is subtropical or tropical moist lowland forests. It is threatened by habitat loss.

Kupea is a genus of myco-heterotrophic plants in family Triuridaceae, native to tropical Africa. It contains the following species:

Lacandonia is a mycoheterotrophic plant that contains no chlorophyll and has the unusual characteristic of inverted positions of the male (androecium) and female (gynoecium) floral parts, something that had not been seen in any other plants with the occasional exception of some individuals of the related Triuris brevistylis.

Triuris is a genus in the family Triuridaceae. It consists of species that are small and achlorophyllous, occurring in tropical Mexico, Guatemala, and northern South America.

Hillegonda (Hiltje) Maas-van de Kamer is a botanist at the Institute of Systematic Botany at Utrecht University. She is the wife of Professor Paul Maas and together they have published many papers. She is a specialist in the flora of the neotropics.

Sciaphila is a genus of mycoheterotrophic plants in the family Triuridaceae. These plants receive nutrition from fungi and neighboring trees and have less need for photosynthesis. It is widespread in tropical and subtropical regions, found in Africa, China, Japan, the Indian Subcontinent, Southeast Asia, Latin America and on various islands Pacific Islands.

Peltophyllum is a genus of myco-heterotrophic plants in family Triuridaceae, native to southern South America. It contains the following species:

Sciaphila thaidanica is one of the members of the genus Sciaphila, It has light purple coloration with large flowers and inflorescence. It is characterized by one of the smallest plastomes ever encountered, which at the same time are very compact. It was recently discovered in Borneo.