Triveni Kala Sangam is an important cultural and arts complex and education centre in New Delhi. [2] [3] Founded in 1950, by Sundari K. Shridharani, who was also its Founding Director, Triveni, as it is commonly referred, contains four art galleries, a chamber theatre, outdoor theatre, open air sculpture gallery, besides this it runs its various arts, music and dance classes. It is situated on Tansen Marg, between Mandi House roundabout and Bengali Market. [4]

The idea of starting a dance institution in Delhi was raised by Sundari K. Shridharani, a former student of dancer Uday Shankar, in 1950 [1] [5] when she had just moved to Delhi after marriage. The name 'Triveni Kala Sangam' was coined by flautist, Vijay Raghav Rao and literally meaning "confluence of arts". [2] It started in one room above a Coffee House in Connaught Place, Delhi, with two students under noted artist K. S. Kulkarni. Soon her efforts got noticed, and Pandit Nehru allotted her the land for the institution. Gradually, she organized a small group of people, started organizing concerts, and collecting funds. Guru Rajkumar Singhajit Singh joined Triveni in 1954, as Head of the Manipur Dance Section, and later in 1962, founded the ‘Triveni Ballet’ of which he was Director and Principal Dancer. [6]

An American architect was commissioned to design to multi-purpose complex of art galleries, chamber theatre, library, photography darkroom, staff quarters, classrooms over just half an acre of land. Finally construction began around 1957 and eventually on 3 March 1963, the present building was inaugurated. [2]

Triveni was one of the first buildings by noted American architect, Joseph Allen Stein (1957-1977) in India, [7] who also designed several important building in New Delhi, like India International Centre and India Habitat Centre, Lodhi Road. Designed in modern architecture style, the complex is noted for its " multiple spaces for multiple purposes" and use of jali work (stone lattices), which was to become Stein's hallmark. [8] [9]

Art Heritage Gallery was founded in 1977, by noted theatre personality, Roshen Alkazi, wife of theatre director Ebrahim Alkazi. [10] It was a period before a host of commercial art galleries opened up across Delhi, and especially in South Delhi, even then Triveni managed to maintain its "non-commercial" approach to art. [11] Roshan ran the gallery for over 40 years till her death in 2007. Today Ebrahim, although in his eighties, continues to be its Director. [10] [12]

The Tea Terrace restaurant at Triveni Kala Sangam became a popular space for artists, student and intellectuals to meet and especially known for food specialities. It remained popular through the 70s and 80s, and even when other art centers started coming up across Delhi [13] [14] Over the years, Triveni has remained the only public institution with no membership or ticketed shows. [15]

Sundari K. Shridharani, the Founder and Director of Triveni, was awarded the Padma Shri by Government of India in 1992. [16] She was also praised for the degree of her support for the arts, and her help for those with disadvantaged backgrounds: lowering rates in the Triveni cafe to make it more affordable, allowing artistes to hold classes on the premise rent-free, and waiving fees for economically disadvantaged students. [17] She died on 7 April 2012 in New Delhi, at the age of 93, and her son Amar Shridharani is the General Secretary of Triveni. [17]

Triveni is close to cultural hub of Delhi, Mandi House area, and behind Shri Ram Centre for Performing Arts. It is accessible by Mandi House underground station of Delhi Metro, Blue Line.

Kalakshetra Foundation, formerly simply Kalakshetra, is an arts and cultural academy dedicated to the preservation of traditional values in Indian art and crafts, especially in the field of Bharatanatyam dance and Gandharvaveda music. Based in Chennai, India, the academy was founded in January 1936 by Rukmini Devi Arundale and her husband George Arundale. Under Arundale's guidance, the institution achieved national and international recognition for its unique style and perfectionism. In 1962, Kalakshetra moved to a new campus in Besant Nagar, Chennai, occupying 40 hectares of land.

Joseph Stein, was an American architect and a major figure in the establishment of a regional modern architecture in the San Francisco Bay area in the 1940s and 1950s during the early days of the environmental design movement. In 1952, he moved to India and in 1955 was tasked with the planning of Durgapur in West Bengal, India along with Benjamin Polk. He was commissioned with this task in order to facilitate the establishment of Durgapur Steel Plant later on in 1959 followed by the Durgapur Steel City and Township. He is noted for designing several important buildings in India, most notably in Lodhi Estate in Central Delhi, nicknamed "Steinabad" after him, and where today the 'Joseph Stein Lane', is the only road in Delhi named after an architect. He is also famous for being the architect of the scenic Indian Institute of Management Kozhikode's campus. The Government of India awarded him the fourth highest civilian award of Padma Shri in 1992. His works remain even more relevant in the modern context as need for sustainable and humane architecture is felt. 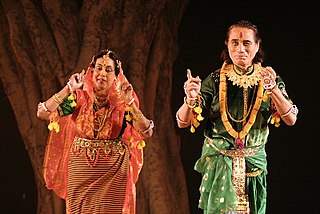 Arunima Kumar, Sangeet Natak Akademi Yuva Puraskar awardee for the year of 2008 for Kuchipudi.
As a young girl of 9, Arunima acted in the ballet Amrapali. The Kuchipudi Dance Academy formally launched her in 1995 where she performed her Arangetram at the Triveni Kala Sangam, New Delhi.

Amal Allana is an Indian theatre director, scenic designer and costume designer and presently she is in her second consecutive term as the Chairperson of National School of Drama, India's premier institute of Theatre training, she also runs the Dramatic Art and Design Academy (DADA), New Delhi, with her husband Nissar Allana, which they co-founded in 2000.

Bhabesh Chandra Sanyal commonly known as B. C. Sanyal, the doyen of modernism in Indian art, was an Indian painter and sculptor and an Art teacher to three generations of artists. During his lifetime he not just saw the partition of the Indian subcontinent three times, 1905, 1947 and 1971, but also witnessed 20th century Indian art in all its phases. His notable paintings include The flying scarecrow, Cow herd, Despair and Way to peace, which depicts Mahatma Gandhi with a Hindu and a Muslim child.

Bengali Market is among the oldest and most popular markets in New Delhi, India. The actual name of the market is Bangali Mal Market, but over the years it has come to be known as just Bengali Market, though it has nothing to do with the Indian state of West Bengal. It was built by Bengali Mal Lohia in 1930. It is a relatively small market, comprising several stores situated in a circular manner around a traffic roundabout. Today, it is famous for its North Indian street food, and shops selling sweets such as Nathu's Sweets and Bengali Sweet House. 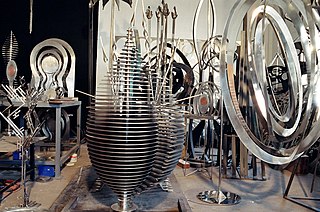 Surendra Nath Jena(Odia: ଗୁରୁ ସୁରେନ୍ଦ୍ର ନାଥ ଜେନା; 10 October 1924 – 8 October 2007) created an entirely new Odissi dance style with an oeuvre of many compositions. This dance style incorporates the various aspects of Indian culture, such as temple sculpture, ancient dance, Sanskrit and vernacular literature, yoga, traditional painting, manuscripts, and philosophy. The entire music and dance choreography of these compositions were by Jena himself. 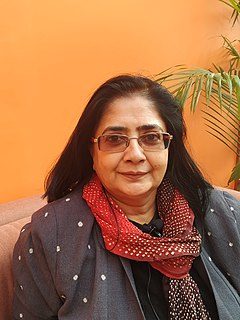 O. P. Sharma is an Indian photographer based in Delhi. He heads the photography department of Triveni Kala Sangam. Earlier, he taught photography at Modern School for many years. His works have been widely exhibited in India as well as other countries .He is the recipient of many awards and honours, and is credited with mobilising the international photography community to observe 19 August as World Photography Day.