Troidini is a tribe of swallowtail butterflies that consists of some 135 species in 12 genera. Members of this tribe are superlatively large among butterflies (in terms of both wingspan and surface area) and are often strikingly coloured.

The tribe consists of the following genera:

Members of this tribe feed on poisonous pipevine plants, typically of the genus Aristolochia , as larvae. As a result, they themselves are poisonous and unpalatable to predators (Pinheiro 1986), like the pipevine swallowtail, and are mimicked by other butterflies (Scott 1986). 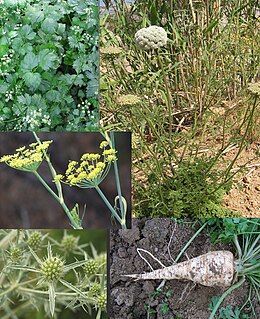 Apiaceae or Umbelliferae is a family of mostly aromatic flowering plants named after the type genus Apium and commonly known as the celery, carrot or parsley family, or simply as umbellifers. It is the 16th-largest family of flowering plants, with more than 3,700 species in 434 genera including such well-known and economically important plants such as ajwain, angelica, anise, asafoetida, caraway, carrot, celery, chervil, coriander, cumin, dill, fennel, lovage, cow parsley, parsley, parsnip and sea holly, as well as silphium, a plant whose identity is unclear and which may be extinct. 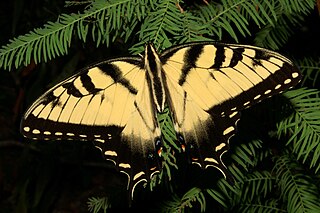 Papilio glaucus, the eastern tiger swallowtail, is a species of butterfly native to eastern North America. It is one of the most familiar butterflies in the eastern United States, where it is common in many different habitats. It flies from spring to fall, during which it produces two to three broods. Adults feed on the nectar of many species of flowers, mostly from those of the families Apocynaceae, Asteraceae, and Fabaceae. P. glaucus has a wingspan measuring 7.9 to 14 cm. The male is yellow with four black "tiger stripes" on each forewing. Females may be either yellow or black, making them dimorphic. The yellow morph is similar to the male, but with a conspicuous band of blue spots along the hindwing, while the dark morph is almost completely black. 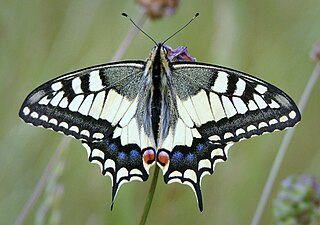 Papilio is a genus in the swallowtail butterfly family, Papilionidae, as well as the only representative of the tribe Papilionini. The word papilio is Latin for butterfly. 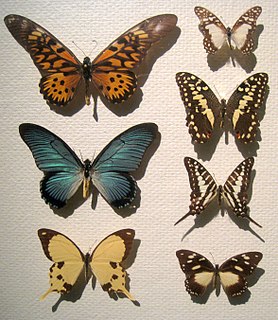 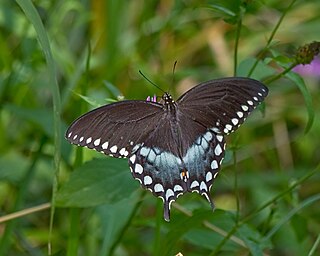 The Heliconiinae, commonly called heliconians or longwings, are a subfamily of the brush-footed butterflies. They can be divided into 45–50 genera and were sometimes treated as a separate family Heliconiidae within the Papilionoidea. The colouration is predominantly reddish and black, and though of varying wing shape, the forewings are always elongated tipwards, hence the common name. 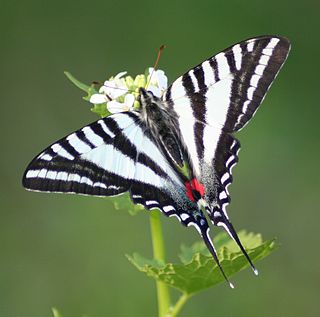 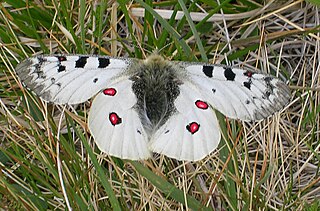 The Parnassiinae or snow Apollos are a subfamily of the swallowtail butterfly family, Papilionidae. The subfamily includes about 50 medium-sized, white or yellow species. The snow Apollos are high-altitude butterflies and are distributed across Asia, Europe and North America. 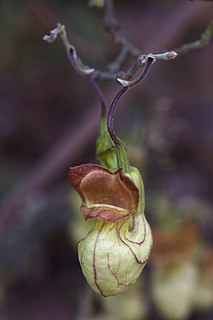 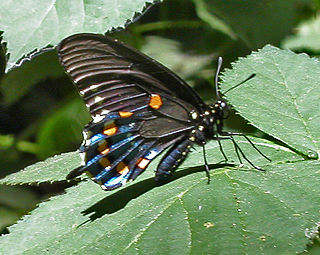 Battus is a New World genus of butterflies that are usually found around pipevine plants. The caterpillars feed off the poisonous pipevines, making the insects poisonous themselves; they taste very bad to ward off predators. Since birds avoid these butterflies, other swallowtail species mimic their coloration. The common North American species are Battus polydamas and Battus philenor. 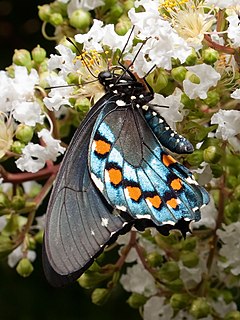 Battus philenor, the pipevine swallowtail or blue swallowtail, is a swallowtail butterfly found in North America and Central America. This butterfly is black with iridescent-blue hindwings. They are found in many different habitats, but are most commonly found in forests. Caterpillars are often black or red, and feed on compatible plants of the genus Aristolochia. They are known for sequestering acids from the plants they feed on in order to defend themselves from predators by being poisonous when consumed. The adults feed on the nectar of a variety of flowers. Some species of Aristolochia are toxic to the larvae, typically tropical varieties. While enthusiasts have led citizen efforts to conserve pipevine swallowtails in their neighborhoods on the West coast, the butterfly has not been the subject of a formal program in conservation or protected in legislation. The butterfly is however of "Special Concern" in Michigan, which is on the Northern limit of its range. 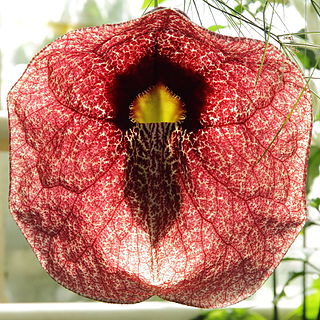 Aristolochia gigantea, the Brazilian Dutchman's pipe or giant pelican flower, is an ornamental plant native to Brazil. Typical of subtropical Bahia and Minas Gerais vegetation, it is a vigorous evergreen climber (vine) with heart-shaped leaves and spectacular fragrant flowers. This plant is cited in Flora Brasiliensis by Carl Friedrich Philipp von Martius. A. gigantea and other tropical Dutchman's pipe varieties pose a threat to the pipevine swallowtail butterfly. The butterfly confuses A. gigantea with its native host plant and will lay eggs on it although pipevine swallowtail caterpillars cannot survive on the foliage.

Parides alopius, the white-dotted cattleheart, is an endemic Mexican butterfly in the family Papilionidae. It has also strayed once into the United States in southeastern Arizona. 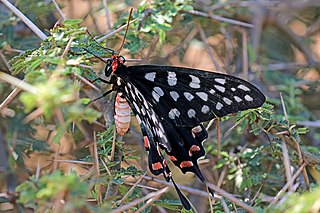 Pharmacophagus antenor, the Madagascar giant swallowtail, is a butterfly from the family Papilionidae. As the common name implies, it is large and endemic to Madagascar. It is the only species in the genus Pharmacophagus. 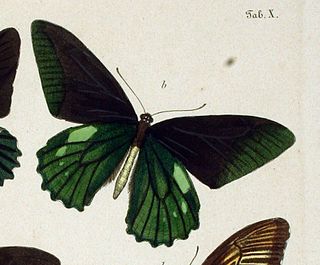 Battus ingenuus, the Dyar's swallowtail or confused swallowtail, is a species of butterfly in the family Papilionidae. 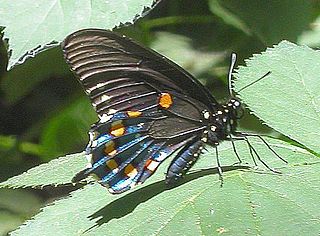 Battus philenor hirsuta, the California pipevine swallowtail or hairy pipevine swallowtail, is a subspecies of the pipevine swallowtail that is endemic to Northern California in the United States. The butterfly is black with hindwings that have iridescent green-blue coloring above and a row of red spots below; the caterpillars are black with fleshy protrusions and orange spots. The subspecies' butterflies are smaller in size and hairier than the species, and they lay eggs in larger clutch sizes than the species. The egg clutches are deposited on the shoot tips of the California pipevine, a perennial vine native to riparian, chaparral, and woodland ecosystems of the California Coast Ranges, Sacramento Valley, and Sierra Nevada foothills. The larvae feed exclusively on the foliage and shoot tips of the pipevine, although adults eat floral nectar from a variety of plants. The plant contains a toxic substance, aristolochic acid. The larvae sequester the toxin, and both the juvenile and adult butterflies have high and toxic concentrations of the aristolochic acid in their tissues. Throughout the range of the species, Battus philenor, other butterflies and moths mimic the distinctive coloration of the swallowtail to avoid predators. However, there are no known mimics of the Californian subspecies.

Aristolochia watsonii is a perennial plant in the birthwort family (Aristolochiaceae), found growing among plants of the Arizona Uplands in the Sonoran Desert. The plant is inconspicuous, small and hard to spot, but can be found by following the pipevine swallowtail which lays eggs on it.