The first of the West Hartlepool tramways to be closed was the Foggy Furze line, which was shut down on 4 October 1923. The services on that line were temporarily replaced by motor buses, until opening of the trolleybus system. The Ward Jackson Park tramway was next to be closed, in November 1925. [2]

One month later, on 25 March 1927, the Seaton Carew tramway was converted, bringing Hartlepool's tramway era to an end, and its trolleybus system to its greatest extent. [2]

The system as a whole was operated by West Hartlepool Corporation. However, the route between the two towns was run on behalf of both authorities. The trolleybuses used on that route were jointly owned; each Corporation paid half the running costs of the joint route and was entitled to half of its revenue. [2]

After the end of World War II, West Hartlepool Corporation decided to replace the trolleybus system with motor buses. In 1949, the Seaton Carew route was shut down. Closure of the other two West Hartlepool lines soon followed. [2] Finally, on 31 March 1953 (1953-03-31), the joint route was closed. [1]

By the standards of the various now defunct trolleybus systems in the United Kingdom, the Hartlepool system, with its four routes, was quite small. [1]

West Hartlepool's first trolleybuses were four Railless 4-wheel vehicles with Short Brothers 36-seat bodywork. They were numbered 1–4. In 1926, they were joined by two similar vehicles (Nos. 5–6) and a double-deck version (No. 7). [2]

The system had a total fleet of 48 trolleybuses, with a maximum of 31 in service at any one time. [1] None of them is recorded as having survived. [3]

The Chesterfield and District Tramways Company and its successors ran a tramway system in the Derbyshire town of Chesterfield, England. The first horse-drawn line opened in 1882, and in 1897, the system was taken over by Chesterfield Corporation, who extended and electrified it in 1904 and 1905. Additional tramcars were purchased, but two had to be scrapped after a disastrous fire at the depot in 1916. The system suffered from a lack of maintenance as a result of reduced staffing levels during the First World War, and the trams were replaced by trolleybuses in 1927.

The Kingston upon Hull tramway network was a network of 4 ft 8 1⁄2 instandard gauge tram lines following the five main roads radially out of the city centre of Kingston upon Hull, East Riding of Yorkshire, England. Two of these lines went west, and two east. The fifth went to the north, and branched to include extra lines serving suburban areas. Additionally a short line linked the city centre to the Corporation Pier where a ferry crossed the Humber Estuary to New Holland, Lincolnshire. 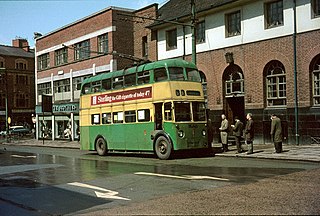 The Rotherham trolleybus system once served the town of Rotherham, West Riding of Yorkshire, England. Opened on 3 October 1912, it was the fourth trolleybus system to be established in the United Kingdom, after the systems in nearby Bradford and Leeds, which had opened simultaneously in 1911, and Dundee earlier in 1912. Between 1912 and 1949, the Rotherham system gradually replaced the Rotherham Tramway. 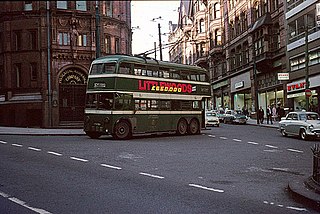 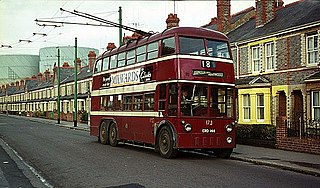 The Cleethorpes trolleybus system once served the holiday resort of Cleethorpes, in Lincolnshire, England. Opened on 18 July 1937, it replaced part of the Great Grimsby Street Tramways, a tramway that had served both Cleethorpes and the neighbouring seaport of Grimsby. It was closed on 4 June 1960. 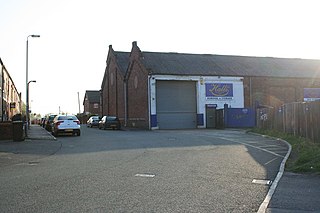 Wigan Corporation Tramways operated a tramway service in Wigan, England, between 1901 and 1931. The first tramway service in the town was run by the Wigan Tramways Company, whose horse trams began carrying passengers in 1880. They began replacing horses with steam tram locomotives from 1882, but the company failed in 1890 when a Receiver was appointed to manage it. The Wigan & District Tramways Company took over the system in 1893 and ran it until 1902. Meanwhile, Wigan Corporation were planning their own tramway system, obtaining an authorising Act of Parliament in 1893, and a second one in 1898. This enabled them to build electric tramways, and in 1902, they took over the lines of the Wigan & District Tramways Company.

Halifax Corporation Tramways operated a tramway service in Halifax, West Yorkshire, England between 1898 and 1939. After considering lifts and inclined planes to assist trams in negotiating the steep hills to the south of the town, they obtained permission to build a conventional system in 1897, and the first three routes opened in 1898. By 1905 there were 37 miles (60 km) of track and 96 tramcars, supplied by two manufacturers. In 1921, an additional route was added to the system, and the Corporation embarked on a programme of building their own tramcars, some of which replaced existing vehicles, while some extended the fleet. During the 1930s, the trams were gradually replaced by motor buses, either run by the Corporation or by private companies, and the last tram ran on 14 February 1939.

The Oldham trolleybus system once served the town of Oldham, then in Lancashire, but now in Greater Manchester, England.

The Great Grimsby Street Tramways Company was a tramway serving Grimsby and Cleethorpes in Lincolnshire, England. It was a subsidiary of The Provincial Tramways Company. They opened a horse tramway in 1881, running from the Wheatsheaf Inn in Bargate to the border with Cleethorpes, with a branch along Freeman Street, and extended the line into Cleethorpes in 1887. It followed the trend of many British systems, and was converted to an electric tramway in December 1901. Small extensions were made to the system at both ends, but the basic plan of the system remained the same throughout its life.