The York Corporation Tramways (YCT) provided an electric tramway and trolleybus service in York between 1910 and 1935. [1]

In 1909 the Corporation of York purchased the assets of the York Tramways Company. [2] Initially it took over the operation of the horse-drawn tramway, but put into effect immediate plans for its electrification and extension. The system eventually expanded to six main routes out from the city centre to Acomb, Dringhouses, Fulford, Haxby Road, Hull Road and South Bank. Unlike most other systems in England, it was built to 3 ft 6 in (1,067 mm) gauge. [3] [4]

On 1 April 1934, the network became part of York-West Yorkshire when the YCT merged its operations with those of the West Yorkshire Road Car Company. Following a decision to abandon electric traction, the route to Dringhouses closed on 5 January 1935, the other five on 16 November 1935. [4] [5] [6]

The YCT operated a fleet of 45 trams.

Before 1925, the fleet was renumbered and new cars were delivered:

In 1915 YCT purchased four 24-seat trolleybuses from the Edison & Swan Electric Light Company on services to Clifton and Heworth. They operated from a small depot on Foss Islands Road. Charging points were located at each of the termini. With these becoming life expired, in December 1920 four Railless trolleybuses entered service on route 4 from the foot of Parliament Street to Heworth. In 1921 all were transferred to YCT's new Piccadilly depot. Having too become life expired, all were replaced by motor buses in 1929. [4] [7]

With a view to resuming trolleybus operation, in January 1931 a double-deck Charles H Roe bodied Karrier was borrowed from Doncaster Corporation for evaluation, but it was deemed that double-deckers were not suitable and thus three 32-seat single deck Charles H Roe bodied Karrier-Cloughs were purchased, resuming trolleybus operation on route 4 in October 1931. [4]

On 1 April 1934, all passed to the York-West Yorkshire when the YCT merged its operations with those of the West Yorkshire Road Car Company. Following a decision to abandon electric traction, the trolleybuses were withdrawn on 5 January 1935. [4] [5] [6]

Doncaster Corporation Tramways was an electric tramway network serving the town of Doncaster, England. It was authorised in 1899, and the first route to Bentley opened in 1902. This remained separated from the rest of the system until North Bridge was built to carry traffic over the Great Northern Railway main line to Edinburgh. Soon afterwards, deep mining of coal began in the area, and several extensions to the system were made between 1913 and 1916 to serve new communities which developed around the pit heads. The Racecourse route was unusual, in that it had balloon loops at both ends to enable almost continuous running on race days, a feature that was not common in England, and only found favour in Europe in the 1950s and 1960s.

The Chesterfield and District Tramways Company and its successors ran a tramway system in the Derbyshire town of Chesterfield, England. The first horse-drawn line opened in 1882, and in 1897, the system was taken over by Chesterfield Corporation, who extended and electrified it in 1904 and 1905. Additional tramcars were purchased, but two had to be scrapped after a disastrous fire at the depot in 1916. The system suffered from a lack of maintenance as a result of reduced staffing levels during the First World War, and the trams were replaced by trolleybuses in 1927. 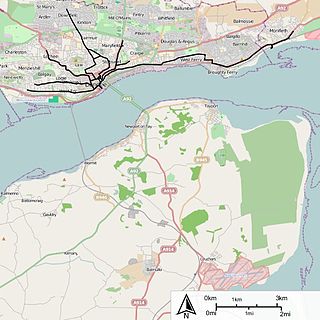 Dundee Corporation Tramways formerly served the City of Dundee in Scotland. The Corporation had financed the construction of a horse tramway in 1877, but had then leased it to the Dundee and District Tramways Company. They had replaced most of the horse trams with steam tram locomotives pulling trailer cars from 1884, but in 1897 the Corporation decided that it would run the tramway system itself. After some negotiation and the payment of compensation, they took over the system in 1899, with a view to electrifying it. Electric trams started running in 1900, and the changeover was completed in 1902.

The Rotherham trolleybus system once served the town of Rotherham, West Riding of Yorkshire, England. Opened on 3 October 1912, it was the fourth trolleybus system to be established in the United Kingdom, after the systems in nearby Bradford and Leeds, which had opened simultaneously in 1911, and Dundee earlier in 1912. Between 1912 and 1949, the Rotherham system gradually replaced the Rotherham Tramway. 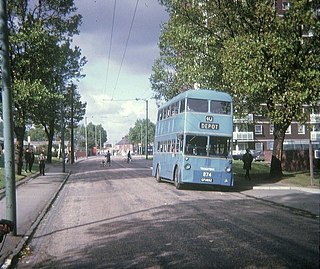 Walsall Corporation Tramways operated a tramway service in Walsall between 1904 and 1930.

Wigan Corporation Tramways operated a tramway service in Wigan, England, between 1901 and 1931. The first tramway service in the town was run by the Wigan Tramways Company, whose horse trams began carrying passengers in 1880. They began replacing horses with steam tram locomotives from 1882, but the company failed in 1890 when a Receiver was appointed to manage it. The Wigan & District Tramways Company took over the system in 1893 and ran it until 1902. Meanwhile, Wigan Corporation were planning their own tramway system, obtaining an authorising Act of Parliament in 1893, and a second one in 1898. This enabled them to build electric tramways, and in 1902, they took over the lines of the Wigan & District Tramways Company.

Llanelly and District Electric Tramways operated a standard gauge tramway service in Llanelli, Wales, between 1908 and 1933. It was the successor to a 3 ft gauge horse tramway, which ran from 1882 until 1908. A complex series of negotiations took place in the early 1900s, resulting in the horse tramway being converted to an electric tramway. Standard gauge horse trams were run initially, until the company completed North Dock power station, which supplied electricity to the tramway. Two of the employees who worked on the construction went on to found Balfour Beatty.

Halifax Corporation Tramways operated a tramway service in Halifax, West Yorkshire, England between 1898 and 1939. After considering lifts and inclined planes to assist trams in negotiating the steep hills to the south of the town, they obtained permission to build a conventional system in 1897, and the first three routes opened in 1898. By 1905 there were 37 miles (60 km) of track and 96 tramcars, supplied by two manufacturers. In 1921, an additional route was added to the system, and the Corporation embarked on a programme of building their own tramcars, some of which replaced existing vehicles, while some extended the fleet. During the 1930s, the trams were gradually replaced by motor buses, either run by the Corporation or by private companies, and the last tram ran on 14 February 1939.

Interserve Rail is a British engineering and facilities management company. Founded in 1910, it is a subsidiary of Interserve.

The Great Grimsby Street Tramways Company was a tramway serving Grimsby and Cleethorpes in Lincolnshire, England. It was a subsidiary of The Provincial Tramways Company. They opened a horse tramway in 1881, running from the Wheatsheaf Inn in Bargate to the border with Cleethorpes, with a branch along Freeman Street, and extended the line into Cleethorpes in 1887. It followed the trend of many British systems, and was converted to an electric tramway in December 1901. Small extensions were made to the system at both ends, but the basic plan of the system remained the same throughout its life.

Railless is the generic name for three companies which made trolleybuses in Britain between 1906 and 1926. Railless Electric Traction Co Ltd was established in 1908, and were at the forefront of the introduction of trolleybuses to Britain. Financial difficulties in 1911 resulted in RET Construction Co Ltd being formed, to take over the business, goodwill and patents of Railless Electric Traction. This company ran out of orders during the First World War, and went into receivership. Charles H. Roe took over the bodywork part of the business, using RET's works in Leeds, and the goodwill and patents were sold to Railless Ltd, a new company which had been set up by Short Bros Ltd, and manufacture of the chassis transferred to their Seaplane works at Rochester, Kent.