Truckee High School is one of two high schools in the Tahoe-Truckee Unified School District, which is based in the Lake Tahoe area town of Truckee in eastern Nevada County, California.

Truckee High School is one of five California high schools who are a member of the Nevada Interscholastic Activities Association and competes in the 3A Northern League. In 2011 the girls volleyball team completed a "3-peat" state championship run. In 2012 the football team completed a "4-peat" State Championship run and posted a 47-1 record over a 4 year span. The baseball team is the 2-time defending state champion heading into the 2020 season. The Wolverines are best known for its football program. The Wolverines have won 12 Nevada state championships and have finished runner-up 5 times. The football team tied the Nevada state record (11-man) with 41 consecutive wins from 2009-2012. The football team was recently[ when? ] featured on KCRA news,. [1]

Programs: -Wind Ensemble -Symphonic Band -Jazz Bands (1 & 2) -Jazz Combos (1 & 2) Truckee High School's Band program was formerly directed by Mr. Dave Green, a well-known name in music, for almost two decades until he retired in 2013. During the 2013-2014 school year, the band was directed by Theresa Smith. Since her resignation in 2014, the band has been under the direction of Jesse Steele. The traditional bands (Wind Ensemble and Symphonic Band) contain around 70 students in total and are split into these two bands primary based on age (The Freshmen and Sophomores in Symphonic Band and the upperclassmen in Wind Ensemble). However, there are exceptions due to equalizing class sizes and scheduling conflicts with other classes. The students learn music theory, practice concert pieces, and play skills on their instruments during the school day. During the football season, the band members also participate in Marching Band and can be seen at the varsity home games. The students also have the option to participate in Region V Honor Band in Chico, California, Solo and Ensemble Festival, the local band festival, Sierra College Honor Band, and more. Annually, they take a trip known as band tour, during which they take a charter bus to San Francisco and the surrounding bay area, and Napa, California, and play at convalescent homes, children's hospitals, elementary schools which lack music programs, and Veterans homes.

Truckee High School has an extensive list of programs for students participate in. These include:

The California Interscholastic Federation (CIF) is the governing body for high school sports in the U.S. state of California. CIF membership includes both public and private high schools. Unlike most other state organizations, it does not have a single, statewide championships for all sports; instead, for some sports, the CIF's 10 Sections each have their own championships. 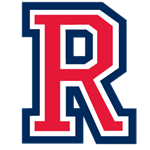 Reno High School (RHS) is a public secondary school in Reno, Nevada, United States. It is a part of the Washoe County School District. The school's teams are known as the Reno Huskies, and the school colors are red and blue.

Colonie Central High School is a public high school in the town of Colonie, with the postal address of Albany, New York. In 2005 it had 2225 students and 132 classroom teachers. It is part of the South Colonie Central School District. The building principal is Christopher Robilotti.

Scott County High School is a public high school in Georgetown, Kentucky, United States. The mascot is a Cardinal. School colors are Red and White with Blue serving as a secondary color. It consists of two separate schools—Scott County High School proper and Elkhorn Crossing School (ECS), a magnet-style "school within a school" that offers specialized STEM and media arts programs. ECS students split their school day between the main Scott County High campus and the separate ECS campus, located about a mile (1.6 km) away. In the 2018–19 school year, its last as the county's only public high school, the combined institution had an enrollment of 2,486, making it the largest high school in the state.

Brecksville–Broadview Heights High School is a comprehensive public high school located in Broadview Heights, Ohio, United States. The school has approximately 1,350 students in grades 9–12. Students come from the communities of Brecksville, Broadview Heights, and a very small segment of North Royalton. The school year consists of two 90-day semesters with four nine-week grading periods. Athletic teams are known as the Bees and the school colors are crimson and gold. 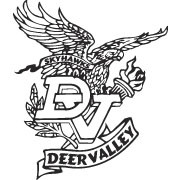 Liberty High School is a high school in Henderson in the U.S. state of Nevada. It is part of the Clark County School District. Before the school opened, prospective students chose the name "Liberty" and the school mascot "The Patriot" through a survey mailed to their homes. This was largely chosen due to the recent terrorist attacks. Liberty's team name is the Patriots. Liberty considers itself to be a "classical school." This is because through Liberty's curriculum, one can study Latin, as well as focus on the history and society of ancient Rome and Greece.

Northside High School is located in Columbus, Georgia, United States. It was founded in 2002. Originally, the mascot was planned to be the Wolverine, but after the September 11 attacks, the mascot was changed to the Patriot. They have outstanding programs like engineering and biomedical science. Northside High School also participates in many local fundraisers through their many clubs and organizations.

Grassfield High School is a public high school located in Chesapeake, Virginia, USA, and is administered by Chesapeake City Public Schools. It was built to ease overcrowding at Deep Creek High School, Great Bridge High School, and Hickory High School. Grassfield, along with Western Branch High School and Oscar Smith High School, features the latest technology available in the school district. Grassfield is also the City of Chesapeake's location for the STEM school as various high school students around the city can apply for admission into the program. 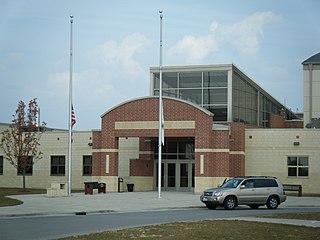 Tivy High School is a public high school located in Kerrville, Texas, United States. It is classified as a 5A school by the UIL, and is a part of the Kerrville Independent School District located in east central Kerr County. In 2015, the school was rated "Met Standard" by the Texas Education Agency.