The Almost Complete Collection of True Singapore Ghost Stories (also True Singapore Ghost Stories or TSGS) is the bestselling book series in Singapore. With over 1.5 million copies sold,[ citation needed ] the series has become a household name since its inception in 1989. Russell Lee, a Singaporean author, compiles reports, stories and interviews about the supernatural. Light and entertaining, each book, which comprises about 30 stories, appeals to both children and mature readers.

Most of the stories take place in Asia but some take place in other parts of the world. Lee also includes articles about the paranormal, featuring detailed investigations into the occult, witchcraft, vampires and other similar topics. Lee stresses[ citation needed ] that the articles are for reading pleasure, not research.

So far, 27 books have been released. Each book has a specific theme and an artwork on the front cover that characterises the book.

Russell Lee's latest book is Book 26. Its lead story, The Silat Princess, is a story about the epic battles of a warrior princess. Other stories include Heavenly Anthems, V for Vigilante, and Mourning Beauty. Russell Lee also documents the gruesome details of Chinese Hell.

The books are sold in Singapore, Malaysia, Indonesia and some other neighbouring countries.

Russell Lee is the author of the series. He has been writing about the supernatural since 1989. Some of his claims are controversial but he writes as one having a great deal of authority.

The latest book in the True Singapore Ghost Stories series is Book 26.

A 13-part TV series, True Singapore Ghost Stories, has been produced by I-Media Entertainment in Singapore. [1]

In 2015, Russell Lee and Universal Studios Singapore collaborated in the production of Halloween Horror Nights at Resorts World Sentosa. Stories and characters from the book series were used in the month-long event. It was like experiencing True Singapore Ghost Stories with a Hollywood twist.

What The Media Said

"Russell Lee’s True Singapore Ghost Stories has been a mainstay on Singapore bestseller lists since they hit shelves in 1989." - THE STRAITS TIMES (2017)

"Russell Lee is Singapore’s most popular writer by a long stretch. His prose is clear and his titles snappy." - SOUTH CHINA MORNING POST

"The Almost Complete Collection Of True Singapore Ghost Stories series continues to capture the imagination of Singaporeans." - THE STRAITS TIMES

"The material is just so incredibly rich... You just want to read on." - THE STRAITS TIMES

"The results of a Forbes survey commissioned by the National Library Board show that as many as four out of ten Singaporeans prefer to read horror-ghost stories... the most popular fiction is Russell Lee’s True Singapore Ghost Stories (Angsana Books)." - THE STRAITS TIMES

"The True Singapore Ghost Stories by Russell Lee is to Singapore what manga is to Japan." - THE OFFICIAL SINGAPORE GUIDE & MAP

"Angsana’s Russell Lee and his team of ghost writers are highly popular, judging by the number of times that the volumes in the True Singapore Ghost Stories series — published by Flame Of The Forest — have hit the bestseller lists of major bookshops in town since the series was launched in 1989." - THE STRAITS TIMES

"Morality and the positive have a firm place in Angsana’s True Singapore Ghost Stories. Good triumphs over evil, always." - THE NEW STRAITS TIMES

Russell Lee is a Singaporean author best known as the creator of True Singapore Ghost Stories, a series of books that has been one of the most popular sources of ghost stories in Singapore, Malaysia, other parts of Asia ever since the release of Book 1 in 1989.

Catherine Lim Poh Imm is a Singaporean fiction author known for writing about Singapore society and of themes of traditional Chinese culture. Hailed as the "doyenne of Singapore writers", Lim has published nine collections of short stories, five novels, two poetry collections, and numerous political commentaries to date. Her social commentary in 1994, titled The PAP and the people - A Great Affective Divide and published in The Straits Times, criticised the ruling political party's agendas.

This article deals with writing that deals with LGBT themes in a Singapore context. It covers literary works of fiction, such as novels, short stories, plays and poems. It also includes non-fiction works, both scholarly and targeted at the general reader, such as dissertations, journal or magazine articles, books and even web-based content. Although Singapore lacks a dedicated gay book publisher or gay bookshop, it does have at least one dedicated gay library, Pelangi Pride Centre, which is open weekly to the public. Many of the works cited here may be found both in Pelangi Pride Centre, as well as the National Library or other academic libraries in Singapore, as well as in some commercial bookshops under 'gender studies' sections.

A sarong party girl is a woman in Singapore or Peninsular Malaysia of an Asian ethnicity, who exclusively dates or socializes with men of European origin for potential monetary or social benefits.

Bonny Susan Hicks was a Singaporean model and writer. After garnering local fame as a model, she gained worldwide recognition for her contributions to Singaporean post-colonial literature and the anthropic philosophy conveyed in her works. Her first book, Excuse Me, Are You A Model?, is recognised as a significant milestone in the literary and cultural history of Singapore. Hicks later published a second book, Discuss Disgust, and many shorter pieces in press outlets, including a short-lived opinion column in a major Singaporean daily that was pulled due to public dissent from Singaporean traditionalists. 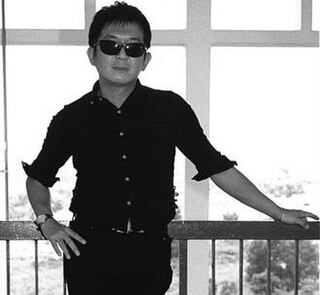 Damien Sin (1965–2011), born Foong Yu Lei, was a Singaporean author, poet and musician. He has written several bestselling books published by the Angsana Books imprint of publisher Flame Of The Forest Publishing. Sin died in 2011.

Mr. Midnight is a children's horror fiction book series written by Jim Aitchison under the pseudonym of James Lee. The series is published by Angsana Books, Flame Of The Forest Publishing. There are currently 126 books in the series, including 25 Special Edition titles, with more being written and released around every two to four months. It has been translated into Burmese, Malay, Indonesian, simplified Chinese, and traditional Chinese.

Sonny Liew is a Malaysia-born comic artist/illustrator based in Singapore. He is best known for The Art of Charlie Chan Hock Chye (2015), the first graphic novel to win the Singapore Literature Prize for fiction.

Goh Sin Tub was a well-known pioneer of Singaporean literature. He was a prolific writer of numerous book titles, which includes bestsellers like The Nan-Mei-Su Girls of Emerald Hill, The Ghost Lover of Emerald Hill, and the Ghosts of Singapore. He also wrote a collection of short stories in Malay. 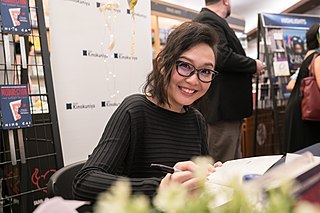 Ning Cai, is a Singapore Literature Prize nominated author, who was also long listed for the Epigram Books Fiction Prize in 2016. She is best recognised for her illusionist/ escapologist stage character Magic Babe Ning, and recognised by Channel News Asia as South East Asia's first professional female magician. Cai has been credited with popularising magic in Singapore. She has been lauded for her good looks in various media outlets as well as publications, both locally and overseas.

Rex Anthony Shelley was a Singaporean author. A graduate of the University of Malaya in Malaysia and Cambridge trained in engineering and economics, Shelley managed his own business and also worked as member of the Public Service Commission (PSC) for over 30 years. For his service, he was conferred the Bintang Bakti Masyarakat by the Government of Singapore in 1978, and an additional Bar the next year.

Epigram Books is an independent publishing company in Singapore. It is known for publishing works of Singapore-based writers, poets and playwrights.

Writing in Asia Series was a series of books of Asian writing published by Heinemann from 1966 to 1996. Initiated and mainly edited by Leon Comber, the series brought attention to various Asian Anglophone writers, like Shirley Geok-lin Lim, Western writers based in Asia like Austin Coates and W. Somerset Maugham and modern and classic stories and novels in English translation from the Malay, Indonesian, Thai and more. The series is also credited with contributing prominently to creative writing and the creation of a shared regional identity amongst English-language writers of Southeast Asia. After publishing more than 110 titles, the series folded after Heinemann Asia was taken over by a parent group of publishers and Comber left.

The Art of Charlie Chan Hock Chye is a graphic novel by Sonny Liew published in 2015 by Epigram Books and 2016 by Pantheon Books. It tells the story of Charlie Chan Hock Chye, a fictional cartoonist, from his early days in colonial life to the present day, while showcasing extracts of his comics depicting allegories of political situations of the time. The comic features a mixture of black and white sketches depicting Singapore's early history contrasted with color comics depicting the present, with several comics within the novel telling their own story. The book was awarded the Singapore Literature Prize following its publication in 2016. The book soon gained widespread critical acclaim internationally and was given several awards, including three Eisner Awards in 2017.

Twinkletoes is a children's fiction book series by Thomas Koh and Titian. The series is published by Angsana Books, Flame Of The Forest Publishing. 19 books have been released so far since the first book A Star Is Born was published in 2008.

Amanda Lee Koe is a Singapore-born, New York-based novelist and short story writer. She is best known for her debut novel Delayed Rays of A Star, published by Doubleday in July 2019, and for being the youngest winner of the Singapore Literature Prize. Delayed Rays was named one of NPR's Best Books of 2019, and was a Straits Times #1 bestseller.

Incredible Tales (I.T.) is a 2004 Singaporean anthology supernatural horror documentary television series released by MediaCorp, revolving horror stories recounted by Asians in each episode. The series is hosted by Thai actor and model Utt Panichkul, or simply known as Utt during the episodes.