Trybe TV is a 24 hours Nollywood movie channel owned by CMA Group. On 25 November 2015, Trybe TV was launched as a movie channel with Nollywood, Ghollywood and Yoruba speaking movies interposed with original lifestyle programming available in Nigeria on DSTV and GOtv.

Trybe TV launched on the MultiChoice DTT platform, GoTV airing movies from Nigerian, Ghanaian and Yoruba-speaking actors and actresses. At 12 noon (WAT) on 17 November 2016, it launched on DStv with the Channel number 195. In addition to Nollywood movies, it also airs original series and short films, behind the scene from movie sets, red carpet events (such as the African Movie Academy Awards and interviews with stakeholders in the movie industry.

It is available only in Nigeria soon as it was launched which expansion to other countries in the year. [1]

The cinema of Nigeria, often referred to informally as Nollywood, consists of films produced in Nigeria; its history dates back to as early as the late 19th century and into the colonial era in the early 20th century. The history and development of the Nigerian motion picture industry is sometimes generally classified in four main eras: the Colonial era, Golden Age era, Video film era and the emerging New Nigerian cinema.

Omotola Jalade Ekeinde is a Nigerian actress, singer, philanthropist and former model. Since her Nollywood film debut in 1995, Omotola has appeared in over 300 films, selling millions of video copies. After receiving numerous high-profile awards, launching a music career, and amassing an enviable fan base, the press has dubbed her as the real Africa Magic. Omotola is the first African celebrity to receive over 1 million likes on her Facebook page. She currently has a total of 3 million followers on Facebook.

Kunle Afolayan is a Nigerian actor, film producer and director. 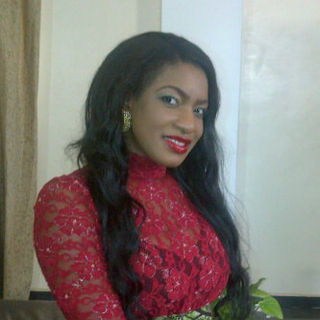 Chiwetalu Agu is a Nigerian actor who won the 2012 Nollywood award for 'best actor in indigenous movie '. His usage of specific language slangs, phrases or clichés in many films has made him uniquely a household name in Nigeria and among Nollywood fans in general. While asserting that comic genres is a unique vehicle in projecting Nigerian culture globally as well as establishing the Nollywood brand, Agu is listed as one of the outstanding comedians who have contributed to the development of Nollywood comic genres by Prof. Femi Shaka of the University of Port Harcourt. Agu is married to Nkechi and has three sons and two daughters.

City People Entertainment Awards are an annual accolade presented by City People Magazine to honour Nigerian and Ghanaian entertainers. The first edition was held in Abeokuta, Ogun State on June 14, 2009. The event was hosted by Governor Gbenga Daniel in the State House. The most recent ceremony was held on June 22, 2014 at 10 Degrees Event Centre, Lagos State. 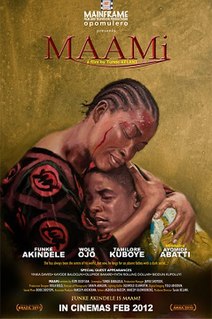 M-Net Movies is a group of South Africa-based film-only television channels launched as Movie Magic in 1995 and broadcast across Sub-Saharan Africa on pay TV satellite services DStv and GOtv. The channels broadcast films/movies based on genre as well as clips featuring behind-the-scenes looks at previous, current and future breakout box office hit films.

Rok Studios is a Nigerian film production company. Its production studios is based in Anthony Village, Lagos. The company was founded in August 2013 by Mary Remmy Njoku. In addition to its numerous films, Rok Studios has produced over 12 TV series.

Faithia Williams is a Nigerian actress, filmmaker, producer and director.

Toyin Abraham Ajeyemi is a Nigerian actress and filmmaker.

Africa Magic is a collection of Pay TV entertainment channels that focus on African programming, most popularly Nigerian series and movies. Africa Magic, which started off as single channel of the same name, is a brand owned by M-Net and now comprises seven channels.

Blossom Chukwujekwu is a Nigerian actor, who made his professional acting debut in 2009. In 2015, he won the Best Supporting Actor Award at the Africa Magic Viewers Choice Awards.

Nollywood is a sobriquet that originally referred to the Nigerian film industry. The origin of the term dates back to the early 2000s, traced to an article in The New York Times. Due to the history of evolving meanings and contexts, there is no clear or agreed-upon definition for the term, which has made it a subject of several controversies. 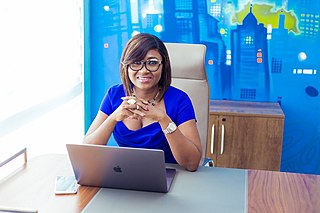 Kelvin Ngozi Ikeduba is a Nigerian actor who in 2014 won the award for Best Cross Over Actor at the Yoruba Movie Academy Awards (YMAA) and he is predominantly known for his diversity in the Nigerian movie industry as he has been featured in Nollywood movies where the english language is commonly used in their productions and also has been featured in diverse Yoruba only speaking movies produced by the Yoruba movie industry of Nigeria.

Ebonylife TV is an entertainment TV channel owned by Mosunmola Abudu popularly called Mo Abudu, It was launched on DSTV on July, 2013 after which the station was later added to DSTV in September 2014. After partnering and satisfying the executive arrangement Ebonylife TV had with DSTV for over five years, Ebonylife TV ended its arrangement with DSTV and proceeded on August, 2018 to start broadcasting on Startimes network, the partnership with startimes was to foster and improve homegrown content to viewers and subscribers in Africa and to also allow Nigerians and viewers generally enjoy the service at a more affordable rate.