The film released on 6 July 2007 to average response where the critics called it as an "ordinary" remake [3] and "the only redeeming factor of this film is the last 20 minutes of the film". Nowrunning.com reviewed the film as "just another remake which does not raise above the ordinary levels and certainly does not reach the standards of its original film". [4] Ironically, the film which itself was a remake from Telugu, was later dubbed again in Telugu language and released as America Alludu (2011). [5]

The music of the film was composed by R. P. Patnaik and lyrics written by K. Kalyan except for one song. The composer chose the same tunes from the original Telugu version which he had composed in 2002.

Idhaya Thirudan is a 2006 Indian Tamil-language romantic action film written and directed by Saran. The film stars Jayam Ravi and Kamna Jethmalani, while Prakash Raj, Vani Viswanath, Santhanam, Kalpana, and Nassar play supporting roles. It was Jayam Ravi’s fifth film but was labelled his worst of the five. The soundtrack was composed by Bharadwaj. It was released on 9 February 2006. It was Kamna Jethmalani's debut movie in Tamil film industry.

Machakaaran is a 2007 Indian Tamil romantic action film written and directed by Tamilvannan of Kalvanin Kadhali fame. The film stars Jeevan and Kamna Jethmalani in lead roles. The film score and soundtrack were composed by Yuvan Shankar Raja. The film was released on 8 November 2007 during Diwali and is considered a box office bomb. However, the film was dubbed into Telugu later and released as Dheera in 2009.

Hoo is a 2010 Indian Kannada-language film written and directed by V. Ravichandran. The film stars V. Ravichandran in lead role whereas Meera Jasmine and Namitha play the female leads. Prakash Raj plays a very important role in the film.

Mallikarjuna is a 2011 Kannada film in the action genre starring V. Ravichandran and Sadha in the lead roles. The film has been directed and written by director Murali Mohan and produced by S. Dinesh Gandhi. S. A. Rajkumar has composed the soundtrack and the background score. The film is slated for release on May 2011. The film is remake of the 2001 Tamil film Thavasi starring Vijaykanth and Soundarya. The hero-heroine love track is inspired from 2007 Telugu film Tulasi starring Venkatesh and Nayanthara. 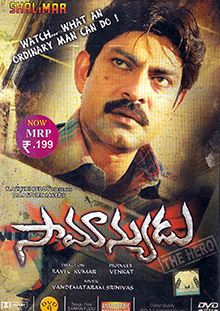 Kathi Kantha Rao is a 2010 Telugu comedy film directed by E. V. V. Satyanarayana, produced by Eedara Srinivasa Rao, Eedara Ravikumar, Eedupuganti Subramanyeshwar Rao and Eedupuganti Purnachandra Rao under Big B Productions banner and starring Allari Naresh and Kamna Jethmalani in lead roles. The film soundtrack was composed by singer turned music composer Mallikarjun and Cinematography was handled by Adusumilli Vijay Kumar. Dialogues and Story for the movie were written by popular writer Prasad Varma. This was E. V. V. Satyanarayana's last movie as director before his death in 2011. This was also the ninth time that the father-son combo of E. V. V. Satyanarayana and Allari Naresh worked together for a movie. The movie was released on 10 December 2010.

Shadow is a 2013 Indian Telugu-language action comedy film produced by Paruchuri Kireeti on United Movies banner and directed by Meher Ramesh. The film stars Venkatesh, Srikanth, Tapsee, Madhurima and music was composed by S. Thaman. The film was released on 26 April 2013. 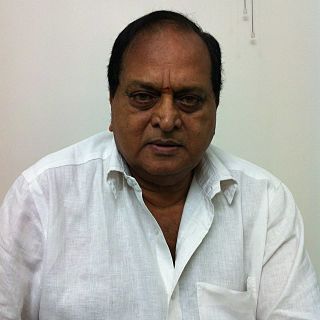 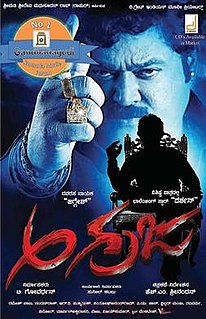 Agraja is a 2014 Indian Kannada film directed by Srinandan starring Darshan and Jaggesh. Kamna Jethmalani, Sanjjanaa, Arundathi and Aadya Gowda played the heroines, while Sadashiva Brahmavar, Rangayana Raghu, Biradar and Achyuth Kumar played supporting roles. The film was produced by editor T. Govardhan under his newly established banner named, The Great Indian Movie Creators. Agraja is based on the subject of a National Film Award winning Telugu film, which was revealed to be R. P. Patnaik's Broker.

Mast Maja Maadi is a 2008 Kannada comedy-romance film directed by R. Ananth Raju featuring Sudeep, Vijay Raghavendra, Diganth, Naga Kiran, Komal and Jennifer Kotwal in the lead roles. The film features background score and soundtrack composed by P. B. Balaji and lyrics by K. Ram Narayan. It is a remake of the 2007 Hindi comedy film Dhamaal, with the opening sequences copied from the 2006 comedy Golmaal: Fun Unlimited.

Ee Bandhana is a 2007 Indian Kannada family - drama film written, directed and co-produced by Vijayalakshmi Singh. This marks her debut directorial project. It stars Vishnuvardhan and Jayapradha in lead roles. While Darshan, Ananth Nag, Tara, Sharmiela Mandre, Tarun Chandra and Jennifer Kotwal form the rest of the ensemble cast. The movie was produced by Jai Jagadish for Dakshath Combines.

Drishya (transl. Visual) is a 2014 Indian Kannada-language drama thriller film directed by P. Vasu and produced by E4 Entertainment, starring V. Ravichandran and Navya Nair. It is a remake of the 2013 Malayalam-language film Drishyam, directed by Jeethu Joseph and starring Mohanlal and Meena. The supporting cast feature an ensemble of Achyuth Kumar, Prabhu, Asha Sarath, Swaroopini Narayan, Unnathi and Rohith B. The film's music was composed by Ilaiyaraaja.

Premakke Sai is a 2001 Indian Kannada language romantic comedy film directed by A. Kodandarami Reddy which marked his debut in Kannada films. The film was produced by C. Ashwini Dutt. The film stars V. Ravichandran, Shaheen Khan, Prakash Rai and Kasthuri in the leading roles.

Nee Tata Naa Birla is a 2008 Indian Kannada comedy film directed and scripted by Nagendra Magadi. The film has an ensemble cast including V. Ravichandran, Jaggesh, Pooja Gandhi, Jennifer Kotwal, Nikita Thukral and Keerthi Chawla in the leading roles. It is a remake of the 1985 Malayalam movie Boeing Boeing.

Crazy Star is a 2014 Indian Kannada language romantic thriller film directed, scripted, edited and composed by V. Ravichandran and produced by his home studio Eshwari Dreams. Besides himself in the lead, the other ensemble cast include Priyanka Upendra, Prakash Rai, Bhavana Rao, Raghu Ram, Naveen Krishna, Akul Balaji, Neethu, Ravishankar Gowda among others in the pivotal roles. The film has its narrative in a hyperlink format. The film opened on 14 February 2014, coinciding the Valentines day to a mixed reception at the box-office.

Alone is a multilingual action film directed by JKS. Titled Alone in Kannada and Karai Oram in Tamil. The film features Nikesha Patel in leading role and Vasistha, Ganesh and Ineya in the supporting roles, while Simran essays an extended guest role. The Kannada version of the film released in November 2015, while the Tamil film released in January 2016.

Aavi Kumar is a 2015 Tamil horror comedy film directed by Kandeepan. The film stars Udhaya and Kanika Tiwari in the lead roles while Nassar, Jagan and Manobala among others form an ensemble cast. This movie is an unofficial remake of Mohanlal starrer Vismayathumbathu (2004). Music for the film was composed by Vijay Antony and Srikanth Deva and the film opened to negative reviews in July 2015.

Thiru Ranga is a 2007 Indian masala film directed by Ravi Bhargavan. The film was produced by A. Selvi and Ch. Sathyanarayana in Tamil and in Telugu, the latter as Julayi. The film features Santhosh and Ankitha in lead roles, with Tejashree, Nassar, Jaya Prakash Reddy, Cochin Haneefa and Manivannan playing supporting roles. The film had musical score by Srikanth Deva, the Tamil version was released on 11 May 2007 while the Telugu version was released on 31 August 2007.

Narappa is an upcoming Indian Telugu-language action drama film directed by Srikanth Addala. A remake of the Tamil-language film Asuran (2019) which is itself based on the novel Vekkai by Poomani, the film features Venkatesh, Priyamani, Karthik Rathnam, Prakash Raj, Murali Sharma and Sampath Raj in prominent roles. It is being jointly produced by Kalaipuli S. Thanu and Daggubati Suresh Babu under their respective banners V. Creations and Suresh Productions.