The Uganda national team made their international debut in 2014 by featuring in the World Lacrosse Championship for the first time at the 2014 edition held in Denver, United States where they were mentored by American coach Tanner Scales. They were also the first African team to feature in the tournament. [1] Their game against South Korea was their first win in the tournament, winning over their Asian opponents, 10-9. [2] They finished 34th among 38th competitors. [3]

They entered the 2018 World Lacrosse Championship in Israel for their second appearance in the international lacrosse competition. They placed 40th in this tournament. They are led by Israeli coach, Peter Ginnegar. [3] 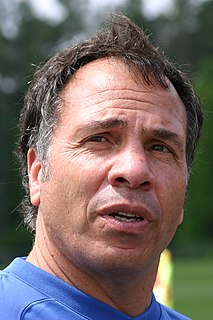 Bruce Arena is an American soccer coach who is currently is the head coach and sporting director of the New England Revolution. He is a member of the National Soccer Hall of Fame and the NJCAA Lacrosse Hall of Fame. Arena has had a long and distinguished coaching career and is considered to be one of the most successful coaches in North American soccer history, having won five College Cup titles and five MLS Cup titles. He was the United States national team head coach at the 1996 Summer Olympics, the 2002 FIFA World Cup and the 2006 FIFA World Cup, head coach of the New York Red Bulls, D.C. United, LA Galaxy, and the New England Revolution in Major League Soccer, and coached Virginia Cavaliers men's soccer to several college soccer championships. He is the U.S. soccer team's longest-serving head coach.

The Uganda national cricket team, nicknamed the Cricket Cranes, represents the Republic of Uganda in international cricket. The team is organised by the Uganda Cricket Association, which has been an associate member of the International Cricket Council (ICC) since 1998.

The Oman national cricket team is the team that represents the country of Oman and is governed by the Oman Cricket Board, which became an Affiliate Member of the International Cricket Council (ICC) in 2000, and gained Associate status in 2014. The national side has played matches at Twenty20 International level. On 24 April 2019, Oman achieved One-Day International status for the first time until 2022, after they beat tournament hosts Namibia by four wickets in 2019 ICC World Cricket League Division Two.

Vincent Enyeama is a Nigerian professional footballer who plays as a goalkeeper. He was also a member of the Nigerian national team from 2002 until October 2015, serving as its captain from 2013 until his retirement from international football. With 101 caps, he is Nigeria's most capped player of all time.

The Dutch Lacrosse Association is the official governing body of lacrosse in the Netherlands. The Nederland Lacrosse Bond sponsors both a men's and women's national team. The national team programs are supported by a burgeoning domestic club league. The NLB is a full member of both the Federation of International Lacrosse (FIL) and the European Lacrosse Federation (ELF).

Milutin Sredojević, simply known as Micho, is a Serbian football manager who is the current Free Agent.

The Israel women's national volleyball team participates in international volleyball competitions and friendly matches. It is governed by the Israel Volleyball Association (IVA). As in any other sports, even though Israel is geographically located in Asia, it competes in European (CEV) competitions. Its best result so far was a fourth place, in the 2010 European League, in Turkey. On September 11, 2010, after losing the first leg of the repechage against Belarus side by 3:2, and beating them by 3:1 at home, the team qualified for the 2011 European Championship after thirty nine years of absence on this competition.

The Canadian men's national lacrosse team participates in international competitions. The team is governed by the Canadian Lacrosse Association, which is a member of World Lacrosse, the international governing body for lacrosse. Traditionally Canada has been one of the leading nations in international play, placing among the top three at the World Lacrosse Championship every year since the tournament's inaugural year in 1967. Canada has a long-standing rivalry with the United States national lacrosse team as they both frequently find themselves facing off against each other.

John Danowski is an American college lacrosse coach who has been the head coach of the Duke Blue Devils men's lacrosse team since the 2007 season. Previously, he had spent 21 seasons as the head coach at Hofstra. Danowski coached Duke to the National Collegiate Athletic Association (NCAA) Men's Lacrosse Championship in 2010, 2013, and 2014, and appearances in the national championship game in 2007 and 2018. He is a three-time winner of the F. Morris Touchstone Award as the NCAA men's lacrosse coach of the year, earning the honor in 1993, 2010, and 2013. One of nine coaches to lead three NCAA Division I championship teams, Danowski has won more games than any other Division I lacrosse coach. In addition, he is the head coach of the United States men's national lacrosse team, which he led to the gold medal at the 2018 World Lacrosse Championship. 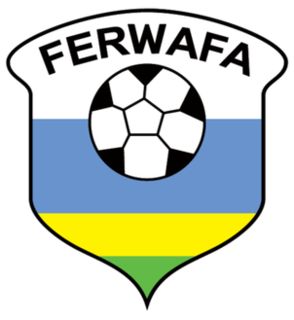 Johnathan McKinstry is a Northern Irish football manager and the current Head Coach of the Uganda national football team, effective 30 September 2019. He signed a three-year contract, replacing French national Sébastien Desabre, who took up a head coaching position with Pyramids FC of Egypt in July 2019. Immediately before his current assignment, McKinstry was the head coach of Bangladesh Football Premier League team Saif SC.

The 2018 World Lacrosse Championship was the 13th edition of the international men’s field lacrosse tournament for national teams organized by the Federation of International Lacrosse (FIL). As many as 50 countries were expected to compete in the tournament; with the official total coming in at 46, which made the 2018 WLC the largest of all-time. The games were held in Netanya, Israel on 12–21 July 2018.

The Israel men's national lacrosse team is governed by the Israel Lacrosse Association. Their best finish was at the 2016 European Lacrosse Championship, winning the silver medal. Israel finished in 7th place at the 2014 World Lacrosse Championship. In both tournaments, England defeated Israel by one goal in the single-elimination round.