The Badminton Confederation Africa(BCA) is the governing body of badminton in Africa. It is one of the 5 continental bodies under the flag of the Badminton World Federation (BWF). It now has 42 member countries and 1 associate member.

The Kenya International is an annual open international badminton tournament held in Kenya. This tournament organized by the Kenya Badminton Association, with the sanctioned by the Badminton Confederation of Africa (BCA) and Badminton World Federation (BWF).

Edwin Ekiring is a Ugandan badminton player, nicknamed "The Black Pearl". He is 1.83 metres tall and weighs 65 kilograms (143 lb). 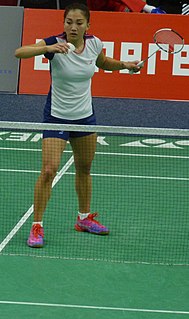 Kate Foo Kune is a badminton player from Mauritius. She is unfortunately also, the first ever badminton player from Mauritius to be suspended for doping. She began playing badminton in Mauritius at age six. Her first major tournament participation was 2013 BWF World Championships in China, where she lost in the first round of women's singles to Sarah Walker of England. Foo Kune represented her country at the 2016 Summer Olympics in Rio de Janeiro, Brazil. She was the flag bearer for Mauritius during the Parade of Nations.

Clement Ebiowo Krobakpo is a Nigerian badminton player. He won two bronze medals at the 2015 African Games in the men's singles and team events. Krobakpo also competed at the 2019 African Games, clinched the mixed team gold.

Adel Hamek is an Algerian badminton player who trained at the Chantecler club in Bordeaux, France. He was one of the 14 players selected for the Road to Rio Program, a program that aimed to help African badminton players to compete at the 2016 Olympic Games. He won the African Championships men's singles title in 2017 and in the men's doubles in 2018.

Mohamed Abderrahime Belarbi is an Algerian badminton player who trained at the Chantecler club in Bordeaux, France. He competed at the 2010 Singapore Summer Youth Olympics. He was one of the 14 players selected for the Road to Rio Program, a program that aimed to help African badminton players to compete at the 2016 Olympic Games. Belarbi won the men's doubles title at the 2018 African Championships. 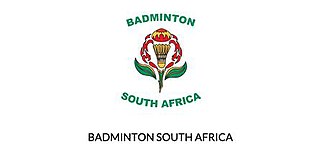 Badminton South Africa is the national governing body that oversees and manages affairs related to the sport of badminton in South Africa. The body is affiliated to the BWF and Badminton Confederation of Africa. The association was founded in 1938, as the South African Badminton Union (SABU) and had a name change in 1998. It is made up of 14 provincial associations and 13 districts. Its teams compete at Sudirman Cup, World Championships, Thomas Cup and Uber Cup.

Thet Htar Thuzar is a Burmese badminton player. She participated at the 2013 Southeast Asian Games in her home country Myanmar. She won her first International title at the Egypt International 2018. In 2019 she has reached eight finals, most in the African Badminton Circuit, winning 6 events

The 2019 BWF Para-Badminton World Championships was held from 20 to 25 August 2019 in Basel, Switzerland. 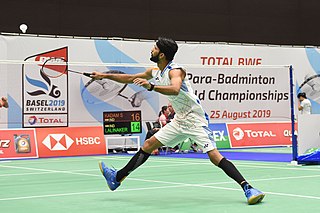 Sukant Indukant Kadam is an Indian professional para-badminton player. Having made his international debut in 2014, he became world number 2 in the SL4 category on 12 June 2017. He won his first title at the Uganda Para-Badminton International 2017. He currently lives in Pune, Maharashtra.

Manoj Sarkar is the current World no.1 Para-badminton player in the SL-3 Classification. He has won a silver medal in the BWF Para-Badminton World championships, 2017 in the singles event. He is supported by the GoSports Foundation through the Para Champions Programme.

Linda Mazri is an Algerian badminton player. She is the gold medalist in African Games and African Championships.

The 2021 Sudirman Cup will be the 17th edition of the Sudirman Cup, the biennial international badminton championship contested by the mixed national teams of the member associations of Badminton World Federation (BWF), since its inception in 1989. The tournament will be played in Vantaa, Finland, between 26 September and 3 October 2021. China is the defending champion.