Uganda at the Deaflympics

Last updated May 03, 2020
Uganda at the Deaflympics

Uganda competed at one edition of the Deaflympics: the 1997 Summer Deaflympics held in Copenhagen, Denmark. [1] The country sent a delegation of twelve athletes (eleven men and one woman) and did not win any medals. [1] [2]

The country has not yet competed at the Winter Deaflympics. 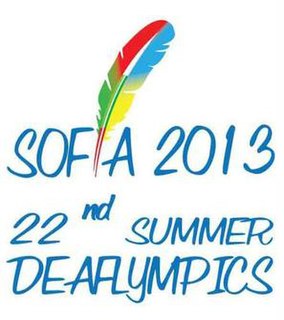 The 2013 Summer Deaflympics, officially known as the 22nd Summer Deaflympics, was an international multi-sport event that took place in Sofia, Bulgaria from July 26 to August 4, 2013. The marathon had been held before in Füssen, Germany on 21 July.
Sofia was hosting the biggest sports event for deaf athletes for a second time. In the past the Bulgarian capital hosted the 1993 Summer Deaflympics, thus becoming only the second city, together with Copenhagen, which has hosted two Summer Deaflympics.

The First International Silent Games, or First International Games for the Deaf, now referred to retroactively as the 1924 Summer Deaflympics, were the inaugural edition of the Deaflympics. The Games were held in Paris, France, from 10 to 17 August 1924, as an equivalent to the Olympic Games for deaf athletes. They were organised on the initiative of deaf Frenchman Eugène Rubens-Alcais, who, just after the Games, co-founded the Comité International des Sports des Sourds with other "deaf sporting leaders". The 1924 Games were "the first games ever" for athletes with a disability, preceding the World Wheelchair and Amputee Games in 1948, which became the Paralympic Games in 1960 but which did not include events for deaf athletes.

Rebecca Meyers is a Paralympic swimmer of the United States. She won three gold and one silver medals in Rio 2016. She was also a member of the 2012 Paralympic Team, and won a silver and bronze in London.Rebecca Meyers has also competed at the 2009 Summer Deaflympics which was held in Taiwan, which is also her only appearance at the Deaflympics. She also clinched a bronze medal in the 4×200m freestyle relay event in the 2009 Summer Deaflympics.

The 1949 Summer Deaflympics officially known as the 6th Deaf Olympiad is an international multi-sport event that was held from 12 August 1949 to 16 August 1949. This event was hosted in Copenhagen, Denmark.

Cindy-Lu Bailey, also known as Cindy-Lu Fitzpatrick, is a former Australian deaf swimmer who has represented Australia in both Commonwealth Games and in Deaflympics. She is considered to be the most decorated woman in Deaflympics history with a record haul of 29 medals, which is the highest among women in Deaflympics. Bailey is also one of the greatest swimmers of Australia in history.

The Philippines has been competing at the Deaflympics since the 2009 edition. The country is represented by the Phil Sports Federation of the Deaf (PSFD).

Uganda competed at the 2019 African Games held from 19 to 31 August 2019 in Rabat, Morocco. Initially 77 athletes were scheduled to represent Uganda. This later rose to 78 athletes. Athletes representing Uganda won two silver medals and eight bronze medals and the country finished in 28th place in the medal table.

Tone Tangen Myrvoll is a former Norwegian deaf cross-country skier, orienteer and runner. She has represented Norway in both Summer and Winter Deaflympics from 1985 to 2003 on seven occasions. She has competed at the Summer Deaflympics in 1985 and in 1989 and competed at the Winter Deaflympics in 1987, 1991, 1995, 1999 and in 2003. Tone Tangen Myrvoll initially started her career as orienteer before pursuing her career in cross country skiing. She is regarded as the most successful cross country skier in Deaflympic history with a medal tally of 15 including 11 gold medals. She is also the most successful athlete from Norway to compete at the Deaflympics.

Canada competed at the 2019 Winter Deaflympics which is being held in Valtellina and Valchiavenna, Italy, from December 12 to 21, 2019. Canada was one of the 34 nations to compete at the multi-sport event. This was the nation's 15th appearance at the Winter Deaflympics, having regularly participated at the event since making its debut in 1953.

United States competed at the 2019 Winter Deaflympics which is being held in Valtellina and Valchiavenna, Italy, from December 12 to 21, 2019. US was one of the 34 nations to compete at the multi-sport event. This was the nation's 12th appearance at the Winter Deaflympics, having regularly participated at the event since making its debut in 1967. 42 athletes represented US at the Deaflympics in all six sporting events including chess, cross-country skiing, curling, ice hockey, alpine skiing and snowboarding.

Kazakhstan is competed at the 2019 Winter Deaflympics which will be held in Valtellina and Valchiavenna, Italy, from December 12 to 21, 2019. Kazakhstan was one of the 34 nations to compete at the multi-sport event. This was the nation's second appearance at the Winter Deaflympics, after making its debut in 2015. It sent a delegation consisting of 40 athletes for the event.