Ulong is a major island and channel of western Palau. [1] It is sometimes called Aulong and originally written Oroolong in English. Ulong is regarded by many as one of the best drift dives in the world. [2]

Ngerumekaol Pass (also known as Ulong Channel) partially cuts through the reef near the Island. [3] The channel stretches about 500 metres (1,600 ft), with an average width of 33 metres (108 ft) and leads into a coral reef lagoon. [2] There are sharks within the currents of the channel and Ulong Corner. The channel contains giant clams and one of the largest known patches of green lettuce coral in the world. [4] [5] Uruktapel is the largest island southward of Koror; at about 2 miles (3.2 km) off its western point is Ulong. Denges and Eil Malk Passages are passable, but navigation may be difficult in the lagoon between them and Ulong Island. From Ulong to Malakal Harbor, the lagoon is navigable. [6]

Henry Wilson (1740–1810), an English naval captain of the British East India Company was aboard his packet ship Antelope, when it shipwrecked off Ulong Island in 1783; [7] he returned to England with the local Prince Lee Boo. In the late 1700s, the island's inhabitants attempted to defend Ulong from attack along Ikesakes Reef but, having been defeated, were forced to leave. [8] There are Palau Cave Paintings on the island. [9]

The Republic of Palau consists of eight principal islands and more than 250 smaller ones lying roughly 500 miles southeast of the Philippines, in Oceania. The islands of Palau constitute the westernmost part of the Caroline Islands chain. The country includes the World War II battleground of Peleliu and world-famous rock islands. The total land area is 459 km2 (177 sq mi). It has the 42nd largest Exclusive Economic Zone of 603,978 km2 (233,197 sq mi). 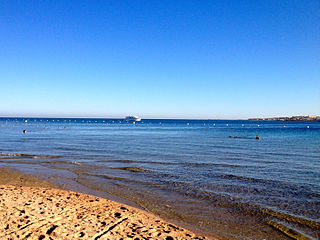 The Red Sea is a seawater inlet of the Indian Ocean, lying between Africa and Asia. Its connection to the ocean is in the south, through the Bab el Mandeb strait and the Gulf of Aden. To its north lie the Sinai Peninsula, the Gulf of Aqaba, and the Gulf of Suez. It is underlain by the Red Sea Rift, which is part of the Great Rift Valley.

A lagoon is a shallow body of water separated from a larger body of water by reefs, barrier islands, or a barrier peninsula. Lagoons are commonly divided into coastal lagoons and atoll lagoons. They have also been identified as occurring on mixed-sand and gravel coastlines. There is an overlap between bodies of water classified as coastal lagoons and bodies of water classified as estuaries. Lagoons are common coastal features around many parts of the world. 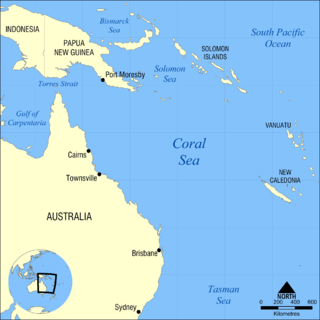 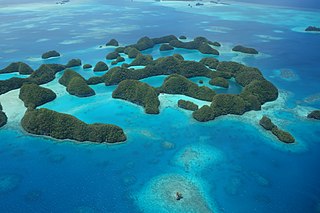 The Rock Islands of Palau, also called Chelbacheb, are a collection of several hundred small limestone or coral uprises in the Southern Lagoon of Palau between Koror and Peleliu, now an incorporated part of Koror State. There are between 250 and 300 islands in the group according to different sources, with an aggregate area of 42 square kilometres (16 sq mi) and a maximum height of 207 metres (679 ft). The islands were declared a UNESCO World Heritage Site in 2012. 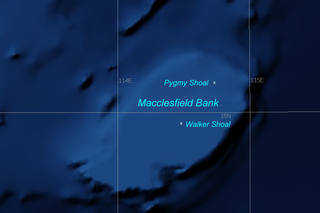 Macclesfield Bank is an elongated sunken atoll of underwater reefs and shoals in the South China Sea. It lies east of the Paracel Islands, southwest of Pratas Island and north of the Spratly Islands. It is about 130 km (81 mi) long from southwest to northeast, and about 70 km (43 mi) wide at its broadest part. With an ocean area of 6,448 km2 (2,490 sq mi) it is one of the largest atolls of the world. The Macclesfield Bank is part of what China calls the Zhongsha Islands, which includes a number of geographically separate submarine features, and also refers to a county-level administrative division. 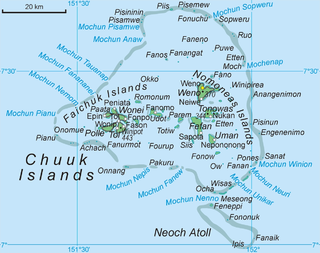 Chuuk Lagoon, previously Truk Atoll, is an atoll in the central Pacific. About 1,800 kilometres north-east of New Guinea, it is located mid-ocean at 7 degrees North latitude and is part of Chuuk State within the Federated States of Micronesia (FSM). A protective reef, 225 kilometres (140 mi) around, encloses a natural harbour 79 by 50 kilometres, with an area of 2,130 square kilometres. It has a land area of 93.07 square kilometres, with a population of 36,158 people and a maximal height of 443 m (1,453 ft). Weno city on Moen Island functions as the atoll's capital and also as the state capital and is the largest city in the FSM with its 13,700 people. 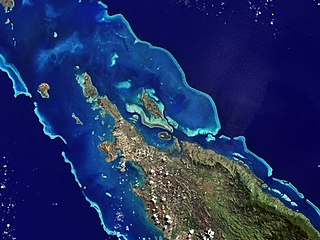 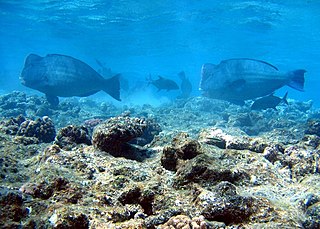 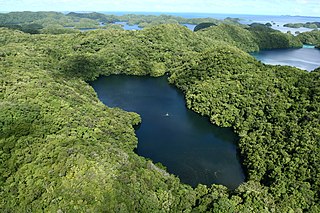 Jellyfish Lake is a marine lake located on Eil Malk island in Palau. Eil Malk is part of the Rock Islands, a group of small, rocky, mostly uninhabited islands in Palau's Southern Lagoon, between Koror and Peleliu. There are about 70 other marine lakes located throughout the Rock Islands. Millions of golden jellyfish migrate horizontally across the lake daily.

Scott and Seringapatam Reefs is a group of atoll-like reefs in the Timor Sea more than 300 kilometres (190 mi) northwest of Cape Leveque, Western Australia, on the edge of the continental shelf. There are three or four separate reef structures, depending on whether Scott Reef Central is counted separately.

Gulf of Cazones is a large gulf in southern Cuba. It is located at the south by the provinces of Matanzas and Cienfuegos, between the northeast edge of the Jardinillos Bank on the south, and Piedras and other cays and reefs on the north. It is considered dangerous for sailing vessels to cross because of calms and cross currents.

Apo Reef is a coral reef system in the Philippines situated on the western waters of Occidental Mindoro province in the Mindoro Strait. Encompassing 34 square kilometres (13 sq mi), it is considered the world's second-largest contiguous coral reef system, and is the largest in the country. The reef and its surrounding waters are protected areas in the country administered as the Apo Reef Natural Park (ARNP). It is one of the best known and most popular dive sites in the country. It is listed in the tentative list for UNESCO World Heritage Sites. 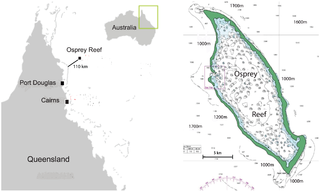 Osprey Reef is a submerged atoll in the Coral Sea, northeast of Queensland, Australia. It is part of the Northwestern Group of the Coral Sea Islands. Osprey Reef is roughly oval in shape, measuring 25 by 12 kilometres, and covers around 195 square kilometres (75 sq mi). It has a perimeter of 69.5 kilometres (43.2 mi). The central lagoon is only 30 metres (98 ft) deep. 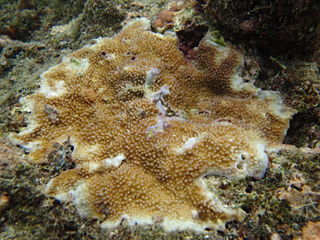 Acropora palmerae is a species of acroporid coral found in the northern Indian Ocean, the central Indo-Pacific, Australia, Southeast Asia, Japan, the East China Sea and the oceanic west Pacific Ocean. It is also found in Palau and the Mariana Islands, American Samoa, the Andaman Islands, the Great Barrier Reef, Okinawa Island, Mauritius, Micronesia, the Cook Islands and the Philippines. It occurs in tropical shallow reefs on flats exposed the action of strong waves and in lagoons, from depths of 0 to 12 metres. It was described by Wells in 1954.