Uncites is an extinct genus of brachiopods in the family Uncitidae. This genus includes spire-bearing brachiopod with a rostrate ventral valve. A typical species is Uncites gryphus from the Middle Devonian in Germany.

Brachiopods, phylum Brachiopoda, are a group of lophotrochozoan animals that have hard "valves" (shells) on the upper and lower surfaces, unlike the left and right arrangement in bivalve molluscs. Brachiopod valves are hinged at the rear end, while the front can be opened for feeding or closed for protection. Two major groups are recognized, articulate and inarticulate. The word "articulate" is used to describe the tooth-and-groove features of the valve-hinge which is present in the articulate group, and absent from the inarticulate group. This is the leading diagnostic feature (fossilizable), by which the two main groups can be readily distinguished. Articulate brachiopods have toothed hinges and simple opening and closing muscles, while inarticulate brachiopods have untoothed hinges and a more complex system of muscles used to keep the two valves aligned. In a typical brachiopod a stalk-like pedicle projects from an opening in one of the valves near the hinges, known as the pedicle valve, keeping the animal anchored to the seabed but clear of silt that would obstruct the opening. 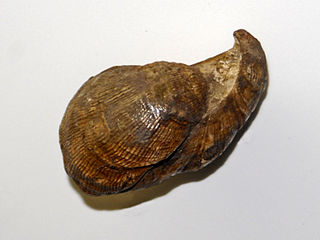 Uncitidae is an extinct family of brachiopods.

The Devonian is a geologic period and system of the Paleozoic, spanning 60 million years from the end of the Silurian, 419.2 million years ago (Mya), to the beginning of the Carboniferous, 358.9 Mya. It is named after Devon, England, where rocks from this period were first studied.

Tentaculites is an extinct genus of conical fossils of uncertain affinity, class Tentaculita, although it is not the only member of the class. It is known from Lower Ordovician to Upper Devonian deposits both as calcitic shells with a brachiopod-like microstructure and carbonaceous 'linings'. The "tentaculites" are also referred to as the styliolinids.

Eospirifer is a genus of extinct brachiopod in the class Rhynchonellata (Articulata) and the order Spiriferida. Their fossils occur most commonly in marine calcareous, microbialitic mudstones with extensive mudcracks or shelly packstones, generally mid-Silurian to early-Devonian in age.

Hederellids are extinct colonial animals with calcitic tubular branching exoskeletons. They range from the Silurian to the Permian and were most common in the Devonian period. They are more properly known as "hederelloids" because they were originally defined as a suborder by Bassler (1939), who described about 130 species. Although they have traditionally been considered bryozoans, they are clearly not because of their branching patterns, lack of an astogenetic gradient, skeletal microstructure, and wide range in tube diameters. Work continues on assessing the true affinities of hederelloids, but they appear to be most closely related to phoronids and other lophophorates. 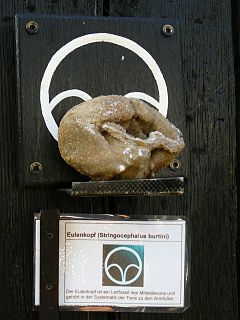 Stringocephalus is an extinct genus of large brachiopods; between 388.1 to 376.1 million years old they are usually found as fossils in Devonian marine rocks. Several forms of the genus are known; they may be found in western North America, northern Europe, Asia and the Canning Basin of Western Australia. Several different types are known; they share a well-developed, curved structure shaped like a beak. Some of the largest specimens discovered to date have been found in China.

Meristina is an extinct genus of brachiopods that lived from the Late Ordovician to the Middle Devonian of Asia, Europe, and North America. Meristina had a smooth convex shell with a one-inch diameter.

Dicoelosia is an extinct genus of brachiopod that lived from the Late Ordovician to the Early Devonian in Asia, Australia, Europe, North America, and South America. 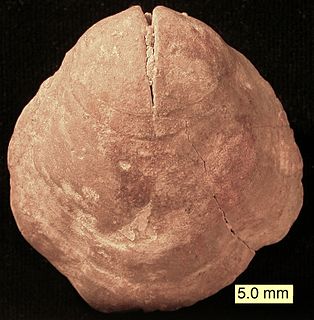 Pentamerus is a prehistoric genus of brachiopods that lived from the Silurian to the Middle Devonian in Asia, Europe, and North America. 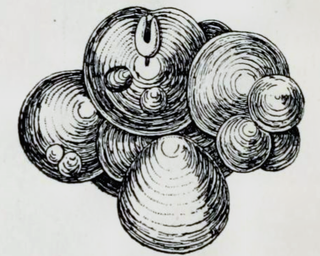 Discinisca is a genus of brachiopods with fossils dating back from the Early Devonian to the Pliocene of Africa, Europe, North America, and New Zealand.

Morganella may refer to:

Gracianella is a genus of fossil brachiopods. It was described by Johnson and Coucot in 1967, and existed from the Silurian to the Devonian of Australia, Austria, Canada, China, the Czech Republic, Italy, Tajikistan, and the United States. A new species, G. paulula, was described by Andrzej Baliński in 2012, from the early Devonian of Ukraine.

Plectodonta is an extinct genus of brachiopods which existed during the Devonian to Silurian of the United States, Australia, Canada, China, the Czech Republic, Czechoslovakia, Germany, Kazakhstan, Morocco, Poland, Spain, Ukraine, Argentina, Bolivia, Sweden, the United Kingdom, and Venezuela. It was described by Kozlowski in 1929, and the type species is P. mariae. A new extinct subspecies, P. mariae pantherae, was described by Andrzej Baliński in 2012, from the early Devonian of Ukraine.

Skenidioides is an extinct genus of brachiopods which existed during the Ordovician, Silurian, and Devonian of what is now Australia, Canada, China, the Czech Republic, Italy, Morocco, Poland, Ukraine, the United States, Belarus, Estonia, Lithuania, Mexico, Norway, Sweden, the United Kingdom, Venezuela, Ireland, Kazakhstan, the Russian Federation, and Argentina. It was described by Schuchert and Cooper in 1931, and the type species is S. billingsi. A new species, S. tatyanae, was described by Andrzej Baliński in 2012, from the early Devonian of Ukraine. The species epithet refers to Tatyana Lvovna Modzalevskaya. 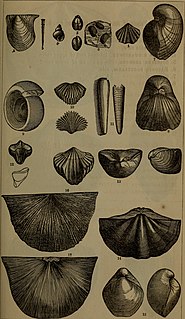 Meristella is an extinct genus of brachiopods found from the Late Silurian to the Late Devonian. They are characterized by a smooth oval shell and a prominent incurved beak on the pedicle valve. Meristella is placed in the family Meristellidae of the articulate brachiopod order Athyridida. 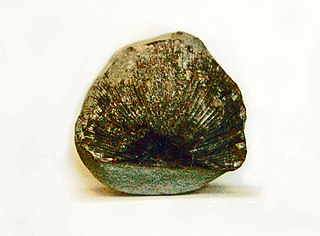 Strophomena is a genus of brachiopods belonging to the order Strophomenida family Strophomenidae, named by Rafinesque in 1824. They were stationary epifaunal suspension feeders. 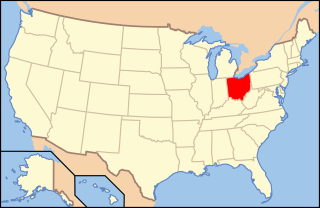 Paleontology in Ohio refers to paleontological research occurring within or conducted by people from the U.S. state of Ohio. Ohio is well known for having a great quantity and diversity of fossils preserved in its rocks. The state's fossil record begins early in the Paleozoic era, during the Cambrian period. Ohio was generally covered by seawater from that time on through the rest of the early Paleozoic. Local invertebrates included brachiopods, cephalopods, coral, graptolites, and trilobites. Vertebrates included bony fishes and sharks. The first land plants in the state grew during the Devonian. During the Carboniferous, Ohio became a more terrestrial environment with an increased diversity of plants that formed expansive swampy deltas. Amphibians and reptiles began to inhabit the state at this time, and remained present into the ensuing Permian. A gap in the local rock record spans from this point until the start of the Pleistocene. During the Ice Age, Ohio was home to giant beavers, humans, mammoths, and mastodons. Paleo-Indians collected fossils that were later incorporated into their mounds. Ohio has been the birthplace of many world famous paleontologists, like Charles Schuchert. Many significant fossils curated by museums in Europe and the United States were found in Ohio. Major local fossil discoveries include the 1965 discovery of more than 50,000 Devonian fish fossils in Cuyahoga County. The Ordovician trilobite Isotelus maximus is the Ohio state fossil. 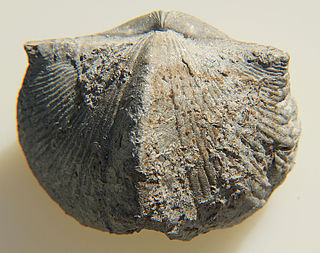 Paraspirifer is a genus of large brachiopods that lived during the late Lower and Middle Devonian in what now are Germany, Spain, Morocco and the United States.

Craniops is an extinct genus of brachiopods in the family Craniopsidae with species known from the Ordovocian to the Devonian.

Caliapora is an extinct genus of corals from the Devonian.