Uncle Moishy and the Mitzvah Men

Uncle Moishy and the Mitzvah Men is a Jewish American children's educational entertainment group based in New York City, featured in audio and video releases, as well as appearing live in concert. [1] Their tapes, CDs and videos are sold in most Jewish music and Judaica stores.

Lead musicians and singers Moshe Tanenbaum and Yossi Berktin are Hasidic Orthodox Jews who play "Uncle Moishy" and lead the "Mitzvah Men" in song and verse that expresses the observant religious lifestyle of Orthodox Judaism. [6] They focus on the religious aspects of Judaism that most easily relate to young children, such as the laws of Shabbat , kashrut and the giving of charity, as well as the good deeds of Pirkei Avot (Ethics of Our Fathers), such as helping others and being nice. [7]

Uncle Moishy began in Toronto, Ontario, Canada in 1975, In 1979 his first album appeared in conjunction with the Jewish Education Program. The original band members were Tanenbaum, Zale Newman, and Chaim Shainhouse; [8] Shainhouse left early on, though he composed for and sang on the first few albums. Uncle Moishy is produced and managed by the Suki and Ding company. The group has produced 22 audio albums and 14 videos to date. [9]

The brit milah is a Jewish religious male circumcision ceremony performed by a mohel ("circumciser") on the eighth day of the infant's life. The brit milah is followed by a celebratory meal.

Mordecai Menahem Kaplan, was a rabbi, essayist and Jewish educator and the co-founder of Reconstructionist Judaism along with his son-in-law Ira Eisenstein. 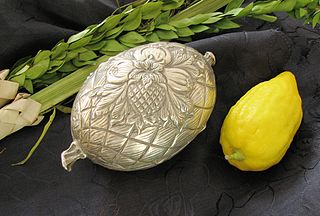 Sukkot, commonly translated as Feast of Tabernacles, known also as the Festival of Ingathering or in some translations the Festival of Shelters, is a biblical Jewish holiday celebrated on the 15th day of the seventh month, Tishrei. During the existence of the Jerusalem Temple, it was one of the Three Pilgrimage Festivals on which the Israelites were commanded to perform a pilgrimage to the Temple. 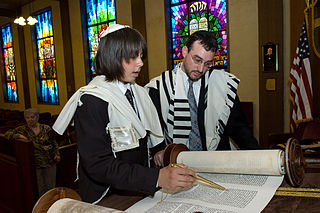 Religious Zionism is an ideology that combines Zionism and Orthodox Judaism. 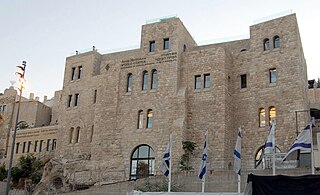 Aish HaTorah is a Orthodox Jewish educational organization and yeshiva.

A Mitzvah tank is a vehicle used by the Orthodox Jewish practitioners of Chabad-Lubavitch Hasidism as a portable "educational and outreach center" and "mini-synagogue" to reach out to non-observant and alienated Jews. Mitzvah tanks have been commonplace on the streets of New York City since 1974. Today they are found all over the globe in countries where Chabad is active.

A shtreimel is a fur hat worn by many married Haredi Jewish men, particularly members of Hasidic Judaism, on Shabbat and Jewish holidays and other festive occasions. In Jerusalem, the shtreimel is also worn by Litvak Jews. The shtreimel is generally worn only after marriage, except in some Yerushalmi communities, where boys wear it from the age of bar mitzvah. 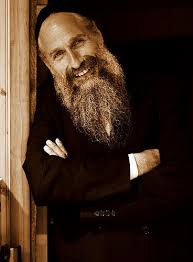 Mordechai Werdyger is an American Hasidic Jewish singer and songwriter popular in the Orthodox Jewish community. As the son of famous Cantor David Werdyger he is known by his stage name Mordechai Ben David or its initials, MBD. He is known as the "King of Jewish Music" and has released over 30 albums while performing worldwide. He has headlined the popular HASC and Ohel charity concerts for almost two decades.

Rabbi Mayer Schiller is an American Chasid based in Monsey, New York, who identifies himself as a member of Skver and Rachmastrivka groups, and serves as spokesperson for the Skver community in New Square. Schiller also maintains active ties to the Modern Orthodox community, and has advocated for a symbiosis between the best of traditional Orthodoxy and broader culture. He teaches advanced Talmud, Bible, and Jewish History at Marsha Stern Talmudical Academy of Yeshiva University, where he has been a teacher since 1987. Prior to that, from 1977-1981, Rabbi Schiller taught at YHSQ, and from 1981-1987, he taught at Mesivta Ohr Torah. From 1979 to 1981, he served as the first hockey coach at the Ramaz School, and later in the same capacity at MTA from 1985-1988, and again from 1990-1995. In his final 6 years as coach, his teams won 6 consecutive championships. He is a baal teshuva, having begun practicing Orthodoxy in the spring of 1964 at age 12. Rabbi Schiller and his wife have 2 children. 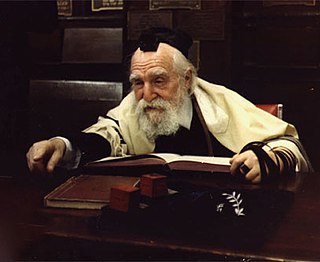 Moshe Feinstein or Moses Feinstein was an American Orthodox rabbi, scholar, and posek, regarded by many as the de facto supreme halakhic authority for observant Jews in North America. His rulings are often referenced in contemporary rabbinic literature. Feinstein served as president of the Union of Orthodox Rabbis, Chairman of the Council of the Moetzes Gedolei HaTorah of the Agudath Israel of America, and head of Mesivtha Tifereth Jerusalem in New York.

Marc H. Tanenbaum (1925–1992) was a human rights and social justice activist and rabbi. He was known for building bridges with other faith communities to advance mutual understanding and co-operation and to eliminate entrenched stereotypes, particularly ones rooted in religious teachings.

Jonathan Cahn is a Messianic Jewish pastor whose novel The Harbinger compares the United States and the September 11 attacks to ancient Israel and the destruction of the Kingdom of Israel. Cahn has followed up with 3 other books - The Mystery of the Shemitah, The Book of Mysteries, and The Paradigm. His most recent work The Paradigm debuted at #5 on the New York Times best-seller list. 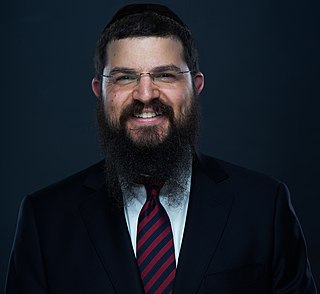 Benzion Hakohen "Benny" Friedman is an American Hasidic Jewish singer. Professionally trained in voice, he rose to prominence on the contemporary Jewish religious music scene with his first album in 2009. His biggest hit to date is the song "ivri anochi", which has been covered by numerous Jewish musical artists. Singing mainly in Hebrew, Friedman tours extensively and also appears in music videos. He views his music as a shlichus (outreach) tool, with the goal of drawing Jews closer to Judaism. 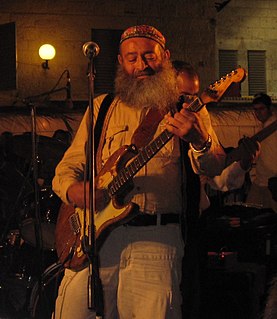 Ari Goldwag is an American-born Orthodox Jewish singer, songwriter, composer, and producer of contemporary Jewish religious music, as well as a rabbi living in Ramat Beit Shemesh, Israel. He was a soloist for the Miami Boys Choir at age 10 and starred on five albums and three videos before his voice changed at age 14. He launched a music career after his marriage and move to Israel. He has released five solo albums, and composes songs and produces albums for other artists.

Judith Kaplan was an author, musicologist, composer, theologian and the first person to celebrate a Bat Mitzvah publicly in America.