The song was recorded with the rest of the album at the Record Plant in New York City and finished at the Phase One studio in Toronto, Ontario. The band's guitarist and primary songwriter Andy McCoy described the song in August 1984 in the Finnish music magazine Soundi: "What could i say about it? It's a cool song, it swings. I don't want to say anything about the lyrics. Everybody can have their own interpretation".[ attribution needed ] Later the band Guns N' Roses took the title of their hit song, "Welcome to the Jungle" from "Underwater World's" chorus where Michael Monroe sings: "Welcome to the ocean. Welcome to the sea. Welcome to the jungle. Deep inside of me.".

The song "Shakes" was recorded in the same sessions as the whole Two Steps From The Move album and was produced by the album's producer Bob Ezrin. The song was still left off the album, but it was featured on multiple compilations. "Magic Carpet Ride" was also left out of the album but was included on the remastered CD-version and on a Finnish compilation. "Oil And Gasoline" was produced by McCoy, Monroe and Gregg Brown, who was also the second producer on "Magic Carpet Ride". Brown also played bass on "Oil And Gasoline". Monroe, McCoy and Brown were the only ones playing on "Oil And Gasoline".

Fields of the Nephilim are an English gothic rock band formed in Stevenage, Hertfordshire, England in 1984. The band's name refers to a Biblical race of angel-human hybrids, known as the Nephilim.

Antti Hulkko, better known as Andy McCoy, is a Finnish musician. He is best known for his role as the lead guitarist and main songwriter of the rock band Hanoi Rocks, but has also played with Iggy Pop and a variety of other groups. McCoy's works cover a wide range of music genres, including rock 'n' roll, punk rock, flamenco, glam punk, glam rock, blues rock and hard rock. He is also an avid painter. 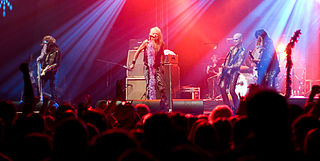 Hanoi Rocks were a Finnish rock band formed in 1979. They were the first Finnish band to chart in the UK and they were also popular in Japan. The band broke up in June 1985 after drummer Nicholas "Razzle" Dingley died in a car accident during their first US tour in December 1984. Original vocalist Michael Monroe and guitarist Andy McCoy reunited in 2001 with a new lineup that lasted until 2009. Although musically closer to traditional rock n' roll and punk, the band have been cited as a major influence in the glam metal genre for bands such as Guns N' Roses, Skid Row and Poison. 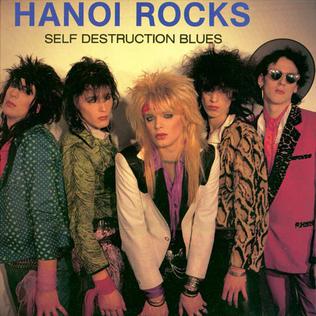 Self Destruction Blues is the third album by the Finnish rock band Hanoi Rocks, released in 1982. Although often listed as a studio album, Self Destruction Blues is a compilation of singles and B-sides that the band recorded in 1981 and 1982. None of the tracks on Self Destruction Blues, however, appear on their previous albums. Guns N' Roses were rumoured to have recorded a cover version of "Beer and a Cigarette" for their 1993 release "The Spaghetti Incident?". Of note is the fact that although Gyp Casino plays on the LP, his replacement Razzle actually appears on the cover. 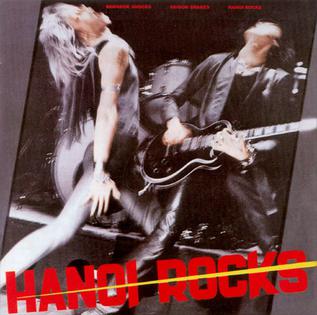 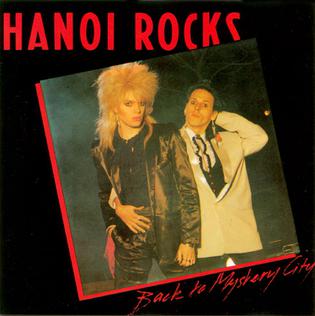 Back to Mystery City is the fourth studio album by the Finnish rock band Hanoi Rocks, released in 1983. It was produced by ex-Mott the Hoople members Dale Griffin and Pete "Overend" Watts, and was the first with Razzle on drums. Besides Hanoi Rocks, the album also features keyboardist Morgan Fisher, and Miriam Stockley on backing vocals, who had also sung with Pink Floyd. 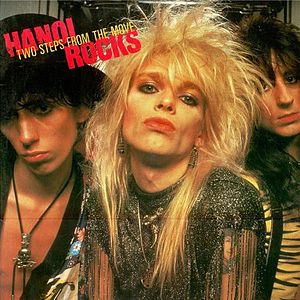 Two Steps From The Move is the fifth studio album by the Finnish rock band Hanoi Rocks, released in 1984. This is their last album to feature drummer Razzle, before he was killed in a car accident on 8 December 1984.

All Those Wasted Years is the first live album by the Finnish rock band Hanoi Rocks, released in 1984. In initial pressing of this album's name was misspelled as "All Those Waisted Years", while correct spelling has been used with later releases of this album, but the original release with the misspelled title is very rare. The album was recorded in December 1983 at The Marquee Club in London, about a year before the death of Hanoi Rocks' drummer Razzle. The live engineer was Mick Staplehurst, the longtime FOH Engineer for Hanoi Rocks.

Sami Yaffa is a bass guitarist best known for his work in New York Dolls, Michael Monroe's bands, and Hanoi Rocks. He is currently the bassist for the Michael Monroe band and The Compulsions. He also plays guitar in his own band Mad Juana.

"Don't You Ever Leave Me" is a single by the Finnish rock and glam punk band Hanoi Rocks taken from their 1984 hit album Two Steps From The Move. The single was released by CBS. 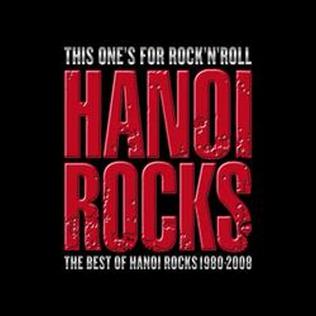 This One's For Rock'n'Roll - The Best Of Hanoi Rocks 1980-2008 is a 2CD retrospective compilation album by Finnish hard rock band Hanoi Rocks, and also the band's last album before their second breakup, released on 26 November 2008 in Japan and 17 December 2008 worldwide. The album features 33 songs from both the original incarnation of the band and the incarnation from the new millennium since the 2002 reunion.

"Tragedy" is a single by the Finnish rock band Hanoi Rocks, from the album Bangkok Shocks, Saigon Shakes, Hanoi Rocks, but "Tragedy" was released a little before the release of the album. "Tragedy" and its B-side, "Café Avenue", are the most well-known songs from Hanoi Rocks's early career.

"Fashion" is a single by the Finnish rock and glam punk band Hanoi Rocks from the album Street Poetry. The single was released on May 16, 2007, in Finland and Europe and on June 21 in Japan. The single rose to number one on the Finnish singles list on May 23. 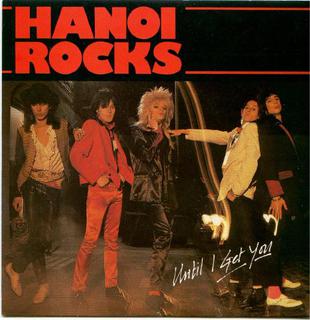 "Until I Get You" is a single by the Finnish rock and glam punk band Hanoi Rocks. The band's guitarist and primary songwriter Andy McCoy wrote this song at the band's manager Seppo Vesterinen's house in Helsinki. McCoy hated the song but the band's drummer Razzle loved it, and wanted it on their next record. Ultimately McCoy also fell in love with the song. The song is a kind of ballad that explains Hanoi Rocks' own melodic style very well. Also, the arrangement for the song was inspired by Alice Cooper's "I'm Eighteen".

The Best of Hanoi Rocks is the first compilation album by the Finnish rock band Hanoi Rocks. The record was released in 1985, the same year the original Hanoi Rocks broke up. The band's founders, vocalist Michael Monroe and guitarist Andy McCoy, would ultimately reunite in 2001 and reform Hanoi Rocks, until the band's final break-up in 2009.

"Keep Our Fire Burning" is a single by the Finnish rock band Hanoi Rocks. The single was only released in Finland.

"Dead By X-Mas" is a single by the Finnish rock and glam punk band Hanoi Rocks. The single was released before the band's second album Oriental Beat but neither the A- or B-side were featured on album until the band's third album, Self Destruction Blues.

"Million Miles Away" is a ballad by the Finnish hard rock band Hanoi Rocks.