Unit cohesion is a military concept, defined by one former United States Chief of staff in the early 1980s as "the bonding together of soldiers in such a way as to sustain their will and commitment to each other, the unit, and mission accomplishment, despite combat or mission stress". [1] This concept lacks a consensus definition among military analysts, sociologists and psychologists, however. [2]

Unit cohesion is a military concept dating back to at least Carl von Clausewitz, if not to antiquity. [3]

Several scholars have cited the influence of Sigmund Freud's thinking on theories of unit cohesion. [4] [5] [6] A number of them noted that Freud wrote of cohesion breakdown among soldiers, asserting that it leads to panic, insubordination, self-interested rather than cooperative reactions to threats, and "a gigantic and senseless dread". [7]

The later development of the concept is strongly informed by the work of Morris Janowitz, who, with Edward Shils, began writing on the topic in the late 1940s. [8] Janowitiz continued to work in this area in his sociological work, as the disruptive policy of frequently rotating individual soldiers and officers during the Vietnam War came under scrutiny as a large factor behind low morale. [9]

The defeat of the Western forces by the poorly equipped Chinese People's Liberation Army in the Korean War in 1950 further generated interest on the role of "human elements" on modern battlefields. [11] Although Western armies traditionally created ties between soldiers through informal means such as teamwork or shared hardships instilled by discipline, [12] the Chinese army relied on formal methods to assimilate recruits into their units. [13] The assimilation process involved features such as coercive persuasion, surveillance, and political control, [14] while military ranks and physical punishments were abolished to allow closer relations between officers and soldiers. [15] The stringent assimilation methods allowed the Chinese to create high morale and cohesion compared to the Western forces. [16] However, high casualty rates and the lack of modern equipment later resulted in a significant erosion of morale and cohesion as the Korean War dragged on. [17] One of the worst cases of this erosion was the partial disintegration of the Chinese army during the spring offensive in May 1951. [18]

In the late 1980s, one researcher stated that, regardless of whether unit cohesion was an actual motivator or merely a stabilizer, what mattered was that unit cohesion "enhanced fighting power", because it reduced "combat inhibitors (stress, fear, isolation)" and promoted "esprit de corps, morale and teamwork". [19] Other research has, however, concluded that there is value in distinguishing the components of social cohesion and "[t]ask cohesion ... the commitment to working together on a shared goal", since some studies conclude that unit effectiveness correlates strongly with task cohesion, not with social cohesion. [2] This debate about the relative importance, or even need for, the concepts of social cohesion and task cohesion is exemplified by an exchange between Anthony King and Guy Siebold in the journal Armed Forces & Society in 2006–2007. [20]

One U.S. military researcher has drawn a distinction between teamwork and unit cohesion—claiming teamwork as being merely "collaboration", while unit cohesion involves a bond that can sustain mutual commitment, not just to the mission, but to each other, and to the group as a whole. This added bond, he argued, enabled teamwork under conditions under which an organization might otherwise break down. [4]

The concept of cohesion was originally used primarily to examine combat behavior. However, more recently models of cohesion have been applied to other phenomena characterized by stress, uncertainty, and the strategic interaction of groups. [21] Uzi Ben-Shalom et al. looked at cohesion during Israeli Defense Force operations in the Occupied Territories during the al-Aqsa Intifada, while Paul Bartone and Amy Adler examined cohesion in a multi-national peacekeeping operation. [22] Terence Lee used a broad concept of cohesion to explain military behavior during events in China in 1989 and Indonesia in 1998 and, in another article, the Philippines in 1986 and Indonesia in 1998. [23]

Lucan Way and Steven Levitsky also used a broad concept of cohesion in order to explain regime maintenance in the former Soviet Union. [24] Jesse Lehrke developed a multi-level model to facilitate the use of both social and task cohesion for examining military behavior during revolutions. [25] Less elaborate versions of this approach can also be seen in work by Dale Herspring and earlier work by Jesse Lehrke. [26] 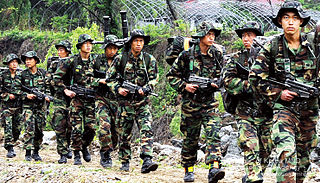 Infantry is a military specialization that engages in military combat on foot, distinguished from cavalry, artillery, and tank forces. Also known as foot soldiers or infantrymen, infantry traditionally relies on moving by foot between combats as well, but may also use mounts, military vehicles, or other transport. Infantry make up a large portion of all armed forces in most nations, and typically bear the largest brunt in warfare, as measured by casualties, deprivation, or physical and psychological stress. 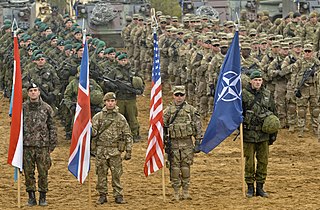 A fireteam or fire team is a small military sub-subunit of infantry designed to optimise "bounding overwatch" and "fire and movement" tactical doctrine in combat. Depending on mission requirements, a typical fireteam consists of four or fewer members: an automatic rifleman, a grenadier, a rifleman, and a designated team leader. The role of each fireteam leader is to ensure that the fireteam operates as a cohesive unit. Two or three fireteams are organised into a section or squad in co-ordinated operations, which is led by a squad leader.

Morale, also known as esprit de corps, is the capacity of a group's members to maintain belief in an institution or goal, particularly in the face of opposition or hardship. Morale is often referenced by authority figures as a generic value judgment of the willpower, obedience, and self-discipline of a group tasked with performing duties assigned by a superior. According to Alexander H. Leighton, "morale is the capacity of a group of people to pull together persistently and consistently in pursuit of a common purpose". Morale is important in the military, because it improves unit cohesion. Without good morale, a force will be more likely to give up or surrender. Morale is usually assessed at a collective, rather than an individual level. In wartime, civilian morale is also important. Esprit de corps is considered to be an important part of a fighting unit. 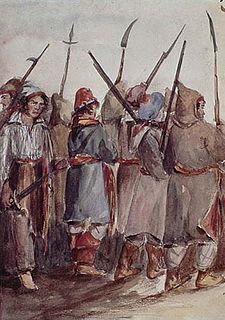 Lesbian, gay, bisexual, transgender, and queer (LGBTQ) personnel are able to serve in the armed forces of some countries around the world: the vast majority of industrialized, Western countries, in addition to Brazil, Chile, South Africa, and Israel. The rights concerning intersex people are more vague. 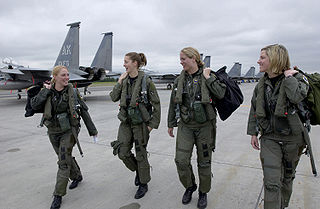 Women have served in the military in many different roles in various jurisdictions throughout history.

Morris Janowitz was an American sociologist and professor who made major contributions to sociological theory, the study of prejudice, urban issues, and patriotism. He was one of the founders of military sociology and made major contributions, along with Samuel P. Huntington, to the establishment of contemporary civil-military relations. He was a professor of sociology at the University of Michigan and the University of Chicago and held a five-year chairmanship of the Sociology Department at University of Chicago. He was the Lawrence A. Kimpton Distinguished Service Professor at the University of Chicago. Janowitz was the vice-president of the American Sociological Association, receiving their Career of Distinguished Scholarship award, and a fellow of both the American Academy of Arts and Sciences and the American Philosophical Association. Janowitz also founded the Inter-University Seminar on Armed Forces and Society, as well as the journal Armed Forces & Society. He was an early founder of the field of military sociology. His students, such as David R. Segal, Mady Segal, and James Burk are prominent and influential military sociologists.

Military sociology is a subfield within sociology. It corresponds closely to C. Wright Mills's summons to connect the individual world to broader social structures. Military sociology aims toward the systematic study of the military as a social group rather than as a military organization. This highly specialized sub-discipline examines issues related to service personnel as a distinct group with coerced collective action based on shared interests linked to survival in vocation and combat, with purposes and values that are more defined and narrow than within civil society. Military sociology also concerns civil-military relations and interactions between other groups or governmental agencies. 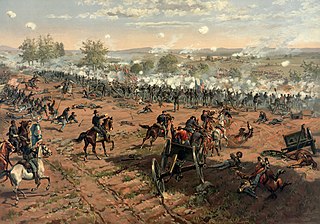 Combat is a purposeful violent conflict meant to weaken, establish dominance over, or kill the opposition, or to drive the opposition away from a location where it is not wanted or needed.

Civil–military relations describes the relationship between civil society as a whole and the military organization or organizations established to protect it. CMR incorporates a diverse, often normative field, which moves within and across management, social science and policy scales. More narrowly, it describes the relationship between the civil authority of a given society and its military authority. Studies of civil-military relations often rest on a normative assumption that it is preferable to have the ultimate responsibility for a country's strategic decision-making to lie in the hands of the civilian political leadership rather than a military.

Penal military units, including penal battalions, penal companies, etc., are military formations consisting of convicts mobilized for military service. Such formations may contain soldiers convicted of offenses under military law, persons enrolled in the unit after being convicted in civilian courts or some combination of the two. Service in such units is typically considered a form of punishment or discipline in lieu of imprisonment or capital punishment. 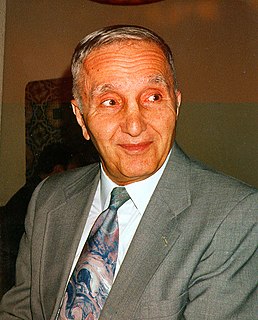 Sam C. Sarkesian was a prominent scholar of civil-military relations and national security, who published numerous books and articles concerning various topics in these areas. He was also a member of the military, serving in Korea and Vietnam. He retired from the U.S. Army as a Lieutenant Colonel. He was also a professor emeritus of political science at Loyola University Chicago, where he was the Chair of the political science department and influenced many new scholars in the field. He also served as the second president of the Inter-University Seminar on Armed Forces & Society (IUS). His memory is strong in the IUS, as many of its fellows were his students.

Unit cohesion in the United States military it has been the subject of dispute and political debate since World War II as the United States military has expanded the categories of citizens it accepts as servicemembers. Unit cohesion is a military concept, defined by one former United States Chief of staff in the early 1980s as "the bonding together of soldiers in such a way as to sustain their will and commitment to each other, the unit, and mission accomplishment, despite combat or mission stress". The concept lacks a consensus definition among military analysts, sociologists, and psychologists.

James Burk is an American sociologist and professor at Texas A&M University. He is most notable as a scholar of military sociology, political sociology, and the history of sociology. He is a central figure in the study of civil-military relations in democratic societies.

Combat effectiveness is the capacity or performance of a military force to succeed in undertaking an operation, mission or objective. Determining optimal combat effectiveness is crucial in the armed forces, whether they are deployed on land, air or sea. Combat effectiveness is an aspect of military effectiveness and can be attributed to the strength of combat support including the quality and quantity of logistics, weapons and equipment as well as military tactics, the psychological states of soldiers, level of influence of leaders, skill and motivation that can arise from nationalism to survival are all capable of contributing to success on the battlefield.