The census covered England and Wales, the Channel Islands, and the Isle of Man but did not include Scotland. [1]

The Channel Islands are an archipelago in the English Channel, off the French coast of Normandy. They include two Crown dependencies: the Bailiwick of Jersey, which is the largest of the islands; and the Bailiwick of Guernsey, consisting of Guernsey, Alderney, Sark and some smaller islands. They are considered the remnants of the Duchy of Normandy and, although they are not part of the United Kingdom, the UK is responsible for the defence and international relations of the islands. The Crown dependencies are not members of the Commonwealth of Nations or of the European Union. They have a total population of about 164,541, and the bailiwicks' capitals, Saint Helier and Saint Peter Port, have populations of 33,500 and 18,207, respectively. The total area of the islands is 198 km2. 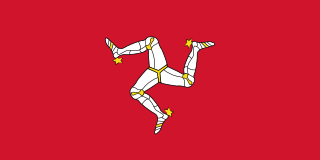 The Isle of Man, sometimes referred to simply as Mann, is a self-governing British Crown dependency in the Irish Sea between Great Britain and Ireland. The head of state is Queen Elizabeth II, who holds the title of Lord of Mann and is represented by a lieutenant governor. Defence is the responsibility of the United Kingdom.

The census was destroyed by fire in 1942 during the Second World War while in store at the Office of Works in Hayes in an event that was not attributed to enemy action. [2]

The Office of Works was established in the English Royal household in 1378 to oversee the building of the royal castles and residences. In 1832 it became the Works Department forceswithin the Office of Woods, Forests, Land Revenues, Works and Buildings. It was reconstituted as a government department in 1851 and became part of the Ministry of Works in 1940.

There was no census taken in 1941 due to the Second World War, however, the register taken as a result of the National Registration Act 1939, which was released into the public domain on a subscription basis in 2015 with some redactions, captures many of the same details as the census and has assumed greater significant following the destruction of the 1931 census. [3] 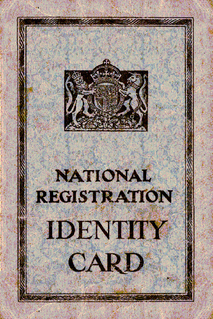 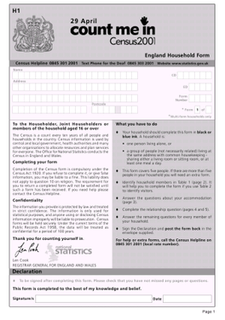 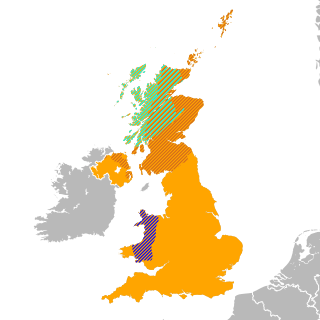 English, in various dialects, is the most widely spoken language of the United Kingdom, however there are a number of regional languages also spoken. There are 14 indigenous languages used across the British Isles: 5 Celtic, 3 Germanic, 3 Romance, and 3 sign languages. There are also many immigrant languages spoken in the British Isles, mainly within inner city areas; these languages are mainly from South Asia and Eastern Europe. 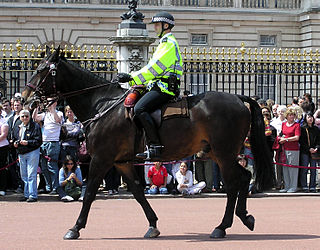 The National Archives (TNA) is a non-ministerial government department. Its parent department is the Department for Culture, Media and Sport of the United Kingdom of Great Britain and Northern Ireland. It is the official archive of the UK government and for England and Wales; and "guardian of some of the nation's most iconic documents, dating back more than 1,000 years." There are separate national archives for Scotland and Northern Ireland. 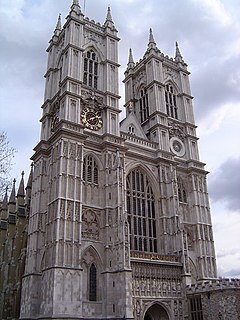 The United Kingdom Census of 1851 recorded the people residing in every household on the night of Sunday 30 March 1851, and was the second of the UK censuses to include details of household members. However, this census added considerably to the fields recorded in the earlier 1841 UK Census, providing additional details of ages, relationships and origins, making the 1851 census a rich source of information for both demographers and genealogists.

Spaniards in the United Kingdom are people of Spanish descent resident in Britain. They may be British citizens or non-citizen immigrants.

Ukrainians in the United Kingdom consist mainly of British citizens of Ukrainian descent.

The following outline is provided as an overview of and topical guide to the United Kingdom of Great Britain and Northern Ireland; a sovereign state in Europe, commonly known as the United Kingdom (UK), or Britain. Lying off the north-western coast of the European mainland, it includes the island of Great Britain—a term also applied loosely to refer to the whole country—the north-eastern part of the island of Ireland and many smaller islands

Czechs in the United Kingdom refers to the phenomenon of Czech people migrating to the United Kingdom from the Czech Republic or from the political entities that preceded it, such as Czechoslovakia. There are some people in the UK who were either born in the Czech lands or have Czech ancestry, some of whom descended from Jewish refugees who arrived during World War II.

The UK Statistics Authority announced on 27 March 2014 that it has recommended to the United Kingdom Government that the next census in England and Wales should take place in 2021, a decade after the previous census in March 2011. The National Records of Scotland (NRS) also reported on the same date that it was proposing to the Scottish Government that a census in Scotland should also take place in 2021. A further detailed plan was published by NRS on 27 September 2018. In October 2014 the Northern Ireland Statistics and Research Agency (NISRA), which is responsible for the census in Northern Ireland, published its proposals to conduct a census in 2021. These announcements followed on from a series of co-ordinated research projects known collectively as the Beyond 2011 Programme.

The United Kingdom Census 1951 was a census of the United Kingdom of Great Britain and Northern Ireland carried out on 8 April 1951. It was the first to ask about household amenities and the largest so far attempted in the country.