The United Serb Republic [a] also known as the West Serbian Federation was a project of unifying into a single independent state, two self-proclaimed Serb states, the Republic of Serbian Krajina (RSK) in Croatia and Republika Srpska (RS) in Bosnia and Herzegovina (BiH), with the intent of it later being annexed by the "mother-state of Serbia". [1]

The Serbs are a nation and South Slavic ethnic group that formed in the Balkans. The majority of Serbs inhabit the nation state of Serbia, as well as the disputed territory of Kosovo, and the neighboring countries of Bosnia and Herzegovina, Croatia and Montenegro. They form significant minorities in North Macedonia and Slovenia. There is a large Serb diaspora in Western Europe, and outside Europe there are significant communities in North America and Australia. 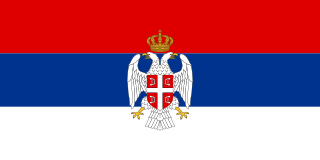 The Republic of Serbian Krajina or Serb Republic of Krajina, pronounced [rɛpǔblika sr̩̂pskaː krâjina]), known as Serb Krajina or simply Krajina, was a self-proclaimed Serb proto-state, a territory within the newly independent Croatia, which it defied, active during the Croatian War (1991–95). It was not recognized internationally. The name Krajina ("Frontier") was adopted from the historical Military Frontier of the Habsburg Monarchy and Austria-Hungary, which had a substantial Serb population and existed up to the late 19th century. The RSK government waged a war for ethnic Serb independence from Croatia and unification with FR Yugoslavia and Republika Srpska.

On 28 February 1991, the Croatian Serbs declared their secession from Croatia [2] and adopted a resolution declaring their desire to unite with Serbs in Serbia, Montenegro, and Bosnia and Herzegovina. [3] On 27 June, the unification of the self-proclaimed Serbian Autonomous Oblasts (SAOs) of Krajina in Croatia and Bosanska Krajina in Bosnia and Herzegovina was declared in response to the "disintegration of Yugoslavia, caused by the secession of Slovenia and Croatia" and on "the principle that all Serbs should live in one state." [4] On 24 October, the SAO Eastern Slavonia, Baranja and Western Syrmia joined the united state. [5] The Bosnian Serb Assembly organised a referendum on 10 November 1991, which concluded that the Serb people in Bosnia and Herzegovina would remain in a Yugoslav state with Serbia, Montenegro and the SAO's. [6] [ better source needed ]

Serbia, officially the Republic of Serbia, is a country situated at the crossroads of Central and Southeast Europe in the southern Pannonian Plain and the central Balkans. It borders Hungary to the north, Romania to the northeast, Bulgaria to the southeast, North Macedonia to the south, Croatia and Bosnia and Herzegovina to the west, and Montenegro to the southwest. The country claims a border with Albania through the disputed territory of Kosovo. Serbia's population numbers approximately seven million. Its capital, Belgrade, ranks among the longest inhabited and largest citiеs in southeastern Europe.

Montenegro is a country in Southeast Europe on the Adriatic Sea. It borders Bosnia and Herzegovina to the northwest; Serbia and Kosovo to the east, Albania to the south and Croatia to the west. Montenegro has an area of 13,812 square kilometres and a population of 620,079. Its capital Podgorica is one of the twenty-three municipalities in the country. Cetinje is designated as the Old Royal Capital.

Bosnia and Herzegovina, abbreviated BiH or B&H, sometimes called Bosnia–Herzegovina and often known informally as Bosnia, is a country in Southeastern Europe, located within the Balkan Peninsula. Sarajevo is the capital and largest city.

On 26 December 1991, Serbia, Montenegro, and the Serb rebel-held territories in Croatia agreed that they would form a new "third Yugoslavia". [7] Efforts were also made in 1991 to include SR Bosnia and Herzegovina within the federation, with negotiations between Milošević, Bosnia's Serbian Democratic Party, and the Bosniak proponent of union – Bosnia's Vice-President Adil Zulfikarpašić taking place on this matter. [8] Zulfikarpašić believed that Bosnia could benefit from a union with Serbia, Montenegro, and Krajina, thus he supported a union which would secure the unity of Serbs and Bosniaks. [8] Milošević continued negotiations with Zulfikarpašić to include Bosnia within a new Yugoslavia, however efforts to include the whole of Bosnia within a new Yugoslavia were effectively terminated by late 1991 as Alija Izetbegović planned to hold a referendum on independence while Bosnian Serbs and Bosnian Croats formed autonomous territories. [8] The independence referendum was organised unconstitutionally and it failed to attain the constitutionally required two-third majority voter turnout. The total turn out of voters was 63.4% of which 99.7% voted for the independence of Bosnia and Herzegovina. On 3 March, Chairman of the Presidency of Bosnia and Herzegovina Alija Izetbegović declared the independent Republic of Bosnia and Herzegovina and the parliament ratified the action. On 6 April, the United States and the European Economic Community recognized Bosnia and Herzegovina as an independent state and on 22 May it was admitted into the United Nations. 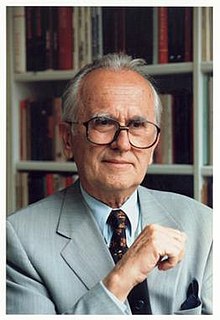 Adil Zulfikarpašić was a prominent Bosniak intellectual and politician who was the Vice President of the Republic of Bosnia and Herzegovina, during the Bosnian War of the 1990s, under Bosnia's first President Alija Izetbegović. After the war he retired from politics and opened the Bosniak Institute, a museum in Sarajevo focused on the Bosniak culture.

In June 1991, representatives of Bosnian Muslims and Bosnian Serbs met to discuss the future status of SR Bosnia and Herzegovina during the Yugoslav crisis. On behalf of SDA president Alija Izetbegović, Adil Zulfikarpašić and Muhamed Filipović met with SDS president Radovan Karadžić, Nikola Koljević and Momčilo Krajišnik. The two sides reached an agreement that BiH was to be sovereign and undivided, remaining in a Yugoslav confederation with Serbia and Montenegro. The Muslim-inhabited area of Sandžak in SR Serbia was to become autonomous, while SAO Krajina and SAO Bosanska Krajina was to abandon their unification plan. Zulfikarpašić received the consent of Serbian President Slobodan Milošević, who also promised 60% of Sandžak to BiH. Izetbegović, who initially supported it, abandoned the agreement.

Alija Izetbegović was a Bosnian politician, activist, lawyer, author, and philosopher who in 1992 became the first President of the Presidency of the newly-independent Republic of Bosnia and Herzegovina. He served in this role until 1996, when he became a member of the Presidency of Bosnia and Herzegovina, serving until 2000. He was also the author of several books, most notably Islam Between East and West and the Islamic Declaration.

On 30 May 1993, an agreement on cooperation was reached between the Republic of Serbian Krajina and Republika Srpska. [9] On 20 June 1993, the Republic of Serbian Krajina held a referendum asking Serb voters if they supported unification with Republika Srpska asking: "Are you for the sovereignty of RSK, unification with RS and at a later date with the rest of the Serbian territories?". [9] It passed with "clear endorsement" [10] having 98.6 percent of voters who voted in favor. [9] Prior to this, Serb generals in Bosnia and Herzegovina and in Croatia formed a military alliance in the event that "Western Serbia" was attacked. [9] During 1994, further plans for the unification and creation of a "new republic of Western Serbia" were developed. [11] In late May 1995, the Parliament of the Republic of Serbian Krajina made the decision to unite with Republika Srpska. [12]

Serb Republic may refer to:

The breakup of Yugoslavia occurred as a result of a series of political upheavals and conflicts during the early 1990s. After a period of political and economic crisis in the 1980s, constituent republics of the Socialist Federal Republic of Yugoslavia split apart, but the unresolved issues caused bitter inter-ethnic Yugoslav wars. The wars primarily affected Bosnia and Herzegovina, neighbouring parts of Croatia and some years later, Kosovo.

Four major international peace plans were proposed before and during the Bosnian War by European Community (EC) and United Nations (UN) diplomats before the conflict was settled by the Dayton Agreement in 1995. 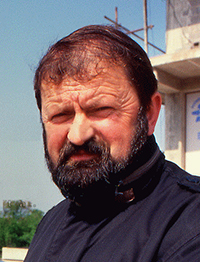 Blaž Nikola Kraljević was a Bosnian Croat paramilitary leader who commanded the Croatian Defence Forces (HOS) during the Bosnian War. An immigrant to Australia, Kraljević joined the Croatian Revolutionary Brotherhood (HRB) upon his arrival there in 1967. During his return to Yugoslavia in January 1992 he was appointed by Dobroslav Paraga, leader of the Croatian Party of Rights (HSP), as leader of the HOS in Bosnia and Herzegovina. 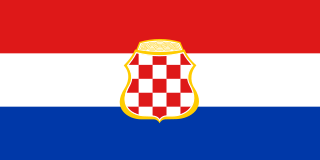 Borislav Mikelić was a businessman and political figure of Croatian Serb background.

The Graz agreement was a proposed agreement made between the Bosnian Serb leader Radovan Karadžić and the Bosnian Croat leader Mate Boban on 6 May 1992 in the city of Graz, Austria. The agreement publicly declared the territorial division between Republika Srpska and the Croatian Community of Herzeg-Bosnia and called for an end of conflicts between Serbs and Croats. The largest group in Bosnia and Herzegovina, the Bosniaks, did not take part in the agreement and were not invited to the negotiations.

The Republic of Serbia was a constituent state of the Federal Republic of Yugoslavia between 1992 and 2003 and the Union of Serbia and Montenegro from 2003 to 2006. With Montenegro's secession from the union with Serbia in 2006, both became sovereign states in their own right.

This is a survey of the postage stamps and postal history of Bosnia and Herzegovina. 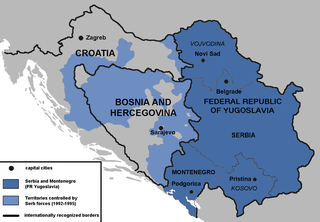 Serbia was involved in the Yugoslav Wars in the period between 1991 and 1999 - the war in Slovenia, the war in Croatia, the war in Bosnia and the war in Kosovo. During this period from 1991 to 1997, Slobodan Milošević was the President of Serbia, Serbia was part of the Federal Republic of Yugoslavia, the International Criminal Tribunal for the Former Yugoslavia (ICTY) has established that Milošević was in control of Serb forces in Bosnia and Herzegovina and Croatia during the wars which were fought there from 1991 to 1995.

From August 1990 to November 1991, during the breakup of Yugoslavia, several Serb Autonomous Regions, or Districts were proclaimed in the Yugoslav republics of SR Croatia and SR Bosnia and Herzegovina in light of the possible secession of the republics from the Socialist Federal Republic of Yugoslavia. These were autonomous Serb-inhabited entities that subsequently united in their respective republic to form the Republic of Serbian Krajina in Croatia and the Republika Srpska in Bosnia and Herzegovina.

A referendum on remaining in Yugoslavia was held in the parts of Bosnia and Herzegovina with a significant Serb population on 10 November 1991. The referendum was organised by the Bosnian Serb Assembly and asked two questions; to Serbs it asked:

Do you agree with the decision of Assembly of the Serbian people in Bosnia and Herzegovina of October 24, 1991, that the Serbian people should remain in a common Yugoslav state with Serbia, Montenegro, the SAO Krajina, SAO Slavonija, Baranja and Western Srem, and with others who have come out for remaining? 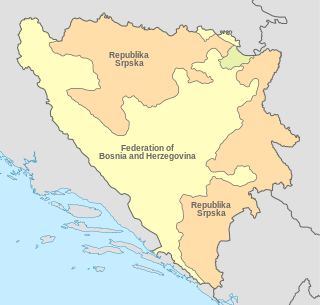