The Upper Marlboro Residential Historic District is a national historic district encompassing a historic residential area of Upper Marlboro, Maryland. The area reflects the town's growth from the 18th to the 20th century, including its importance as the county seat of Prince George's County. The district also contained a significant post-American Civil War African-American population, which was making the transition from slavery to freedom. Located in the district are three previously listed properties: Kingston, Content, and the John H. Traband House. Prominent features of the district include the Trinity Episcopal Church at 14519 Church Street, an 1846 Gothic Revival church designed by Robert Carey Long, Jr., and 5415 Old Crain Highway, a 1 1/2-story wood frame house dated to c. 1730, which is believed to be the oldest building in the town. [2]

The district was listed on the National Register of Historic Places in 2012. [1]

Piscataway is an unincorporated community in Prince George's County, Maryland, United States. It is one of the oldest European-colonized communities in the state. The Piscataway Creek provided sea transportation for export of tobacco. It is located near the prior Piscataway tribe village of Kittamaqundi. 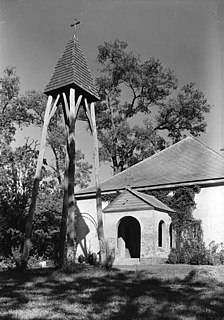 Broad Creek in Prince George's County was the first footprint of European settlement in the immediate counties around what would become the nation's capital, Washington, D.C. The area is part of greater Fort Washington.

Bowieville is a historic home located near Upper Marlboro in Prince George's County, Maryland, United States. It is an elegant two-part plantation house of the late Federal style, built of brick and covered with stucco. The architectural detail is transitional between the Federal and Greek Revival styles.

Compton Bassett is a historic home in Upper Marlboro, Prince George's County, Maryland, United States, that was constructed ca. 1783. It is a two-story brick Georgian house, covered with cream-colored stucco, on a high basement of gray stucco. A two-story wing was added in 1928. Remaining outbuildings include a chapel to the southeast, a meat-house to the southwest, and a dairy to the northwest. Also on the property is a family burial ground. 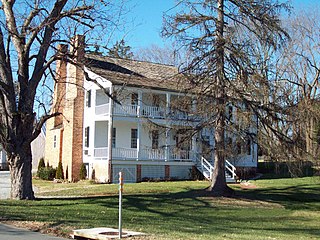 Content, also known as the Bowling House, is a historic home located in Upper Marlboro, Prince George's County, Maryland, United States, across the street from the county courthouse. The home is a ​2 1⁄2-story, two-part frame structure built in three stages. The first section, built in 1787, consisted of the present main block, with a stair hall and porch were added ca. 1800. A north wing was added before 1844. Content is one of the oldest buildings remaining in the county seat of Upper Marlboro, along with Kingston and the Buck House. Content has always been owned by prominent families in the civic, economic, and social affairs of town, county, and state including the Magruder, Beanes, and Lee families; and the Bowling and Smith families of the 20th century.

The Cottage is a 19th-century plantation complex located near Upper Marlboro in Prince George's County, Maryland. The complex consists of the principal three-part plantation house with its grouping of domestic outbuildings and four tenant farms, scattered over 282 acres (114 ha). The plantation house has a ​2 1⁄2-story main block constructed in the 1840s with a typical Greek Revival style interior trim and distinctive Italianate cornice brackets. Within 150 feet (46 m) to the northwest of the house is a complex of domestic outbuildings, including a well house, ice house, and meat house. It was the home of Charles Clagett (1819–1894), a prominent member of Upper Marlboro social and political society during the second half of the 19th century. He served as a county commissioner following the Civil War.

Hazelwood is a historic home located outside Upper Marlboro, Prince George's County, Maryland, United States. The home is a large asymmetrical frame dwelling, built in three discrete sections over a long period of time. They are: a low gambrel-roofed section dating from the 18th century, about 1770; a gable-roofed Federal-style dwelling dating from the very early 19th century; and a tall gable-front Italianate-style central section constructed about 1860. The house stands on high ground west of and overlooking the site of historic Queen Anne town on the Patuxent River. Also on the property are several domestic and agricultural outbuildings, and the reputed sites of two cemeteries.

Kingston, or Sasscer's House, is a ​1 1⁄2-story historic home located at Upper Marlboro, Prince George's County, Maryland, United States. It is believed to be the oldest building remaining in the town of Upper Marlboro and may have been built, at least in part, before 1730. Many alterations and additions were made to it in the Victorian era, including "gingerbread" details typical of this era. The Craufurd family cemetery is located in the woods northwest of the house.

Woodstock is a ​2 1⁄2-story historic home located at Upper Marlboro, Prince George's County, Maryland, United States. The home is an outstanding example of a mid-19th-century plantation house with decorative elements in the Greek Revival style. The main block was probably built in the early 1850s by Washington Custis Calvert. The home is in the Tidewater house style.

Nottingham is a small town on the Patuxent River in Prince George's County, Maryland, United States. It contains an archaeological site which was listed on the National Register of Historic Places in 1975.

Pleasant Hills is a historic home located near Upper Marlboro in Prince George's County, Maryland, United States. It is a large, two-part brick house with Greek Revival detailing. The more recent, main block, was constructed in 1836, and was built by Zaddock Sasscer.

St. Mary's Beneficial Society Hall, constructed in 1892, is a historic building located in Upper Marlboro, Prince George's County, Maryland. The Hall, an excellent example of an African American multi-purpose building, served as a meeting place, social and political center, and house of worship for African Americans living in a segregated society. It is located nearly across the street from St. Mary's Roman Catholic Church, with which it is historically associated. It is a one-story wood frame gable-front building, In 1988, a law firm acquired the building and converted it to office space.

The John H. Traband House is a historic home located at Upper Marlboro in Prince George's County, Maryland, United States. It was built between 1895 and 1897, and is a ​2 1⁄2-story, asymmetrically shaped Queen Anne influenced frame structure of modest size and detailing. Also located on the property are a frame two-story gable-roofed carriage house. The house was constructed as the residence of a prominent citizen, John H. Traband (1857–1938), who was a successful businessman and landholder in Upper Marlboro.

The University Park Historic District is a national historic district located in the town of University Park, Prince George's County, Maryland. The district encompasses 1,149 contributing buildings and 2 contributing sites and is almost exclusively residential and developed as a middle-class, automobile suburb of Washington, D.C.. The primary building type is the detached single-family dwelling, with the only non-residential buildings within the district and the town being two churches and the Town Hall, which is located in a former residence. Notable features within the district include the property's original plantation house, known as Bloomfield, and the nearby family cemetery. It was developed over the period 1920 to 1945, and houses are built in a range of popular early-20th-century architectural styles including Tudor and Mediterranean Revival, and varied interpretations of the Craftsman Aesthetic and the Colonial Revival, including interpretations of Dutch, Georgian, and Federal period substyles. 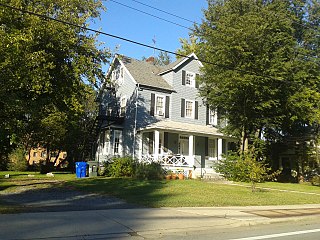 Old Town is an historic neighborhood of College Park, Maryland. It is roughly bounded by the University of Maryland campus, the B&O Railroad tracks, and US Route 1. The area was platted out in 1889, and built out over the next several decades, its developers seeking to attract commuters to Baltimore and Washington, DC, and individuals affiliated with the Maryland Agricultural College. Most of the neighborhood is residential, with American Foursquare and Cape style housing predominating. Closer to the university campus, the developers built garden-style apartment houses and other types of housing to cater to the academic community. The major non-residential structures are a Gothic Revival church, and a modern post office and Washington Metro station.

The Fairmount Heights Historic District encompasses an area of 144 acres (58 ha) in the historic heart of Fairmount Heights, Maryland. The area is notable as one of the first planned African-American communities in the Washington, DC area. Predominantly residential in character, most of its housing stock was built between 1900 and 1960, although there has also been recent development. The district includes the original town hall. and the first public school for African-Americans in the county. There are also five churches and a community center, all important centers of political activism during the period of segregation.

The College Heights Estates Historic District encompasses 170 contributing buildings in a mid-20th century automobile-centered residential suburban area of University Park, Maryland, and the neighboring unincorporated area of College Heights Estates in Prince George's County. The earliest portions of the area were platted out in 1938, and the area was mostly built out between then and 1960. The area features winding lanes and dead-end roads, with large houses on generously sized lots. Houses built before the Second World War are predominantly Colonial Revival in character, while post-war construction includes a large number of ranch, split-entry, and Cape style houses, although they are generally larger than other similar houses built in other neighborhoods. Also distinguishing the neighborhood from others are a significant number of architect-designed homes.