Uqqurmiut Centre for Arts & Crafts is an arts centre that was established by the Uqqurmiut Inuit Artists Association in 1990, in Pangnirtung, in the Qikiqtaaluk Region of Nunavut, Canada. The Centre includes a Tapestry Studio, a Craft Gallery, and Print Shop. In spite of its remote location and small population, numerous Inuit from Pangnirtung have successfully marketed their prints, carvings, sculptures, and textile arts, such as woven wall hangings, to southern collectors. Starting in the 1970s, limited edition prints from the original Print Shop were published annually as the Pangnirtung Prints Collection through the then-Eskimo Co-operative. [1] [2] In 1970 a weaving studio was established and over time the tapestries attracted an international market.

The centre's architecture echos the circular shapes of igloos and skin tents from traditional Inuit settlements.

Uqqurmiut means "the people of the leeside" in Inuktitut. Pangnirtung is at the edge of Pangnirtung Fjord, a fjord near Cumberland Sound in the lee side of a mountain. [8]

The 2,300 sq ft (210 m2) print shop, which was completed in 1994, replaced the original print shop which burned to the ground in 1993. [5] Starting in the 1970s, limited edition prints from the original print shop were published annually as the Pangnirtung Prints Collection through the then-Eskimo Co-operative. [1] [2] When the Uqqurmiut Inuit Artists Association released their 1999 collection of 22 catalogued prints, displays were held in "23 galleries throughout North America". [9]

Elisapee Ishulutaq, who was born at Kanirterjuak, on the east side of Cumberland Sound, Baffin Island in 1925, started her artistic career when she was in her forties. The stories that are referred to her artwork originate from her childhood in the 1920s and early 1930s when she lived in small, remote hunting and fishing camps following the traditional semi-nomadic life of the Uqqurmiut Inuit. Ishulutaq moved to Pangnirtung at about the same time that the Print Shop had opened. She was gifted in carving and drawing and became part of the first wave of artists there who contributed to the annual Print Collection. [10] In 1973, California College of Arts and Crafts for a print gave her an award of merit for one of her prints. By 2012, her tapestries and prints were in prominent public museums, such as the National Gallery of Canada, Ottawa, [11] :68 Montreal Museum of Fine Arts, the Canadian Museum of Civilization, and the Art Gallery of Ontario. [12]

Andrew Qappik is known for the large tapestry entitled "Our ancestors' land is our land now", which is displayed at the Visitors' Centre in Iqaluit, the capital of Nunavut. He designed the flag of Nunavut. [4] :168 [13] John Houston, who was the print shops "technical arts adviser" in the 1975, remembered how 11-year-old Andrew used to watch his uncles Solomon and Imoona Karpik, who were printmakers as they worked in the print shop. [14] In 1978, a retired University of North Carolina history professor, H.G. Jones, noticed then-14-year-old Andrew's work. As an historian he became intrigued with Qappik's depictions of Inuit life in the past. [9] By 1999, Jones had collected all 69 limited edition prints produced by Karpik. Jones, who first visited Pangnirtung Fiord in 1972, was attracted to Pang's Arctic landscape. [9] By 2015, Jones has made almost 31 annual visits to Pangnirtung and had purchased every one of Andrews's prints—etchings, stone cuts, lithographs, and linocuts." [14] In 2006, Jones donated his collection of "140 of Qappik’s catalogued and uncatalogued prints" to the Winnipeg Art Gallery (WAG), which has the world's largest Inuit art collection. Karpik's first solo exhibition was held at the WAG in 2010 and featured these prints. [14] His 2003 drypoint print is a self-portrait of him working at the press in the Uqqurmiut Centre for Arts & Crafts Print Shop. [15]

Pangnirtung is an Inuit hamlet, Qikiqtaaluk Region, in the Canadian territory of Nunavut, located on Baffin Island. As of the 2016 census the population was 1,481, an increase of 3.9% from the 2011 census. The area of the town is 7.77 km2 (3.00 sq mi). Pangnirtung is situated on a coastal plain at the coast of Pangnirtung Fjord, a fjord which eventually merges with Cumberland Sound. As of January 2014, the mayor is Mosesee Qappik.

Jessie Oonark, was a prolific and influential Canadian Inuit artist of the Utkuhihalingmiut Utkuhiksalingmiut whose wall hangings, prints and drawings are in major collections including the National Gallery of Canada. She was born in 1906 in the Chantrey Inlet (Tariunnuaq) area, near the estuary of the Back River in the Keewatin District of the Northwest Territories —the traditional lands of the Utkukhalingmiut Utkukhalingmiut, Utkukhalingmiut. Her artwork portrays aspects of the traditional hunter-nomadic life that she lived for over five decades, moving from fishing the camp near the mouth of Back River on Chantrey Inlet in the Honoraru area to their caribou hunting camp in the Garry Lake area, living in winter snow houses (igloos) and caribou skin tents in the summer. Oonark learned early how to prepare skins and sew caribou skin clothing. They subsisted mainly on trout, whitefish, and barren-ground caribou. The knife used by women, the ulu, their traditional skin clothing, the kamik, the amauti were recurring themes in her work. Oonark has had a major museum retrospective with accompanying scholarly monograph. Despite a late start – she was 54 years old when her work was first published – she was a very active and prolific artist over the next 19 years, creating a body of work that won considerable critical acclaim and made her one of Canada's best known Inuit artists.

Kenojuak Ashevak, is celebrated as a leading figure of modern Inuit art.

Andrew Qappik is a Canadian Inuit graphic artist currently residing in Pangnirtung, Nunavut. Qappik is known for his printmaking and his contribution to the Nunavut coat of arms. His uncles Solomon and Imoona Karpik were also artists, and encouraged him to start drawing.

Pudlo Pudlat (Pudlo), was a Canadian Inuit artist whose preferred medium was a combination of acrylic wash and coloured pencils. His works are in the collections of most Canadian museums. At his death in 1992, Pudlo left a body of work that included more than 4000 drawings and 200 prints.

Shuvinai Ashoona is an Inuk artist who works primarily in drawing. She is known for her detailed pen and pencil drawings depicting northern landscapes and contemporary Inuit life.

Sheila Butler is an American-Canadian visual artist and retired professor. Her collections are featured at the National Gallery of Canada, the Art Gallery of Hamilton, the University of Toronto, the Winnipeg Art Gallery and University of Manitoba in Winnipeg. She is a founding member of Mentoring Artists for Women's Art in Winnipeg, Manitoba and the Sanavik Inuit Cooperative in Baker Lake, Nunavut. She is a fellow of the Royal Canadian Academy of Arts.

Ruth Qaulluaryuk is a Canadian Inuit textile artist, also known for her drawings. 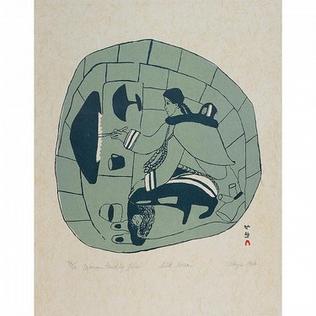 Ulayu Pingwartok was a Canadian Inuk artist known for drawings of domestic scenes and nature.

Eleeshushe Parr was an Inuk graphic artist and sculptor, from the Kingnait area, who produced over 1,160 drawings. Her work has been exhibited in Canada, the United States, and Sweden.

Ikayukta Tunnillie was an Inuit artist in the fields of printmaking and drawing. Tunnillie was born in Nunavut and traveled for much of her life. Tunnillie's work in drawing and printmaking focused on animals and life in the North. She was one of the oldest printmakers to work with the West Baffin Eskimo Co-operative.

Malaya Akulukjuk was an Inuit artist who drew works inspired by her life as a shaman and Inuit spirituality through depictions of human-animal transformations. Akulukjuk was born in 1915, and lived a traditional Inuit life in the Qikiqtat Camp of Nunavut before moving to Pangnirtung on Baffin Island in 1962. Her career as an artist started later than most, at the age of 51. 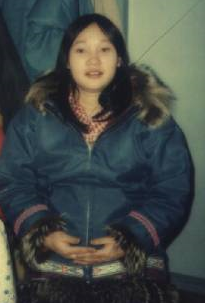 Mary Kapbak Okheena is an Inuvialuit graphic artist known for her stencil prints including "Musk-ox Waiting for the Tide to Cross Water" (1986) and "Shaman Dances to Northern Lights" (1991), drawings and embroidery. She is part of the third generation of organized graphic artists in the Canadian Arctic. Okheena has five children with her husband Eddie and she currently lives in Inuvik where she practices embroidery and makes wall hangings.

Kiakshuk was a Canadian Inuit artist who worked both in sculpture and printmaking. Kiakshuk began printmaking in his seventies and, is most commonly praised for creating “real Eskimo pictures” that relate traditional Inuit life and mythology.

Kavavaow Mannomee is an Inuit printmaker who lived and worked in Nunavut.