Vice Versa is a 1948 British comedy film written and directed by Peter Ustinov and starring Roger Livesey, Anthony Newley, Petula Clark, and Kay Walsh. It is the third screen adaptation of the 1882 novel Vice Versa by F. Anstey. The film was produced by Two Cities Films and distributed by General Film Distributors.

The film begins with an elderly Paul Bultitude seeing his son, Dick, and new daughter-in-law Dulcie off after their wedding. He then directly addresses the audience, implied to be reporters, about a story he has been embarrassed to discuss for years about how he and his son have had such a strong relationship.

During the British Raj, unscrupulous Marmaduke Paradine steals the Garuda Stone, the magical eye of an Indian idol, which grants one wish to each possessor. He had been warned that the thief of the stone would have bad luck; convinced by the time he returns to England, he gives it to the recently widowed Paul, his former brother-in-law.

Paul, a wealthy stockbroker, cannot understand why his eldest son Dick is reluctant to return to boarding school after a holiday. Paul recalls the carefree days of his youth and casually wishes he could take Dick's place while holding the stone. As a result, he finds himself looking just like his son. When Dick realizes what has happened, the neglected boy uses his wish to take on his father's appearance, eager to enjoy the perks of being an adult.

Dick cheerfully sends his protesting father off to school, while he throws parties, flirts with Alice, the maid, and even carries on with his father's girlfriend Fanny Verlayne. He also enters into a partnership in a new horseless carriage business, becoming even wealthier. Meanwhile, Paul's pompous behavior soon antagonizes his classmates and the disciplinarian headmaster, Dr. Grimstone. He also puzzles Grimstone's daughter Dulcie, who cannot understand why her once-attentive beau seems to be smitten with a much-older Fanny.

Paul escapes the bullying at school and returns home, only to overhear Paradine tell Fanny how he plans to trick Dick into signing away control of his horseless carriage company. He pleads with his son to restore them back to their proper bodies, but Dick cannot remember where he left the stone. Paul finally finds it in the hands of his younger son Rollie and gets him to wish things back. Chastened by his experience, Paul becomes more understanding of Dick's situation and has Dr. Grimstone, who had followed him home, removed from the premises.

Back in the present, Paul explains that Fanny left him and that two years prior, Dr. Grimstone died of a heart attack while beating a boy. He is forever remembered for being humiliated by the Bultitudes. The Garuda Stone was stolen by an eager thief who accidentally wished himself away from the police to the North Pole. Paul warns the audience that if they were to find a green-grey stone with a handle on it to not make any wishes. Being lonely, he ended up marrying Alice the maid who gives him an earful for wasting his time telling the story.

At the time of its release, the critic for Daily Mirror wrote, "Peter Ustinov has deliberately exaggerated in the film. This may bring him into conflict with lovers of the original story. But the fact remains that this spectacular burlesque has many novel touches and gets the laughs. Personally, I enjoyed myself, and I think you will." Monthly Film Bulletin said, "It is funny in patches, but goes on far too long; and the director, who also wrote the screenplay, would have been wiser to cut some of his own additions [to the book]. Anthony Newley . . . is excellent in a long and exacting part, and Petula Clark is attractive as the headmaster's daughter, but it is sad to see as good an actor as Roger Livesey with nothing to do but make an ass of himself." [1] In later years, Leonard Maltin observed, "Parts of it are silly, but much of it is inspired and hilarious." [2]

List of notable events in music that took place in the year 1965. 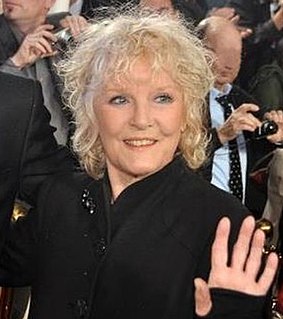 Vice Versa: A Lesson to Fathers is a comic novel by Thomas Anstey Guthrie, writing under the pseudonym "F. Anstey", first published in 1882. The title originates from the Latin phrase "vice versa", meaning "the other way around".

Anthony Peter Hatch is an English composer for musical theatre and television. He is also a songwriter, pianist, arranger and producer. 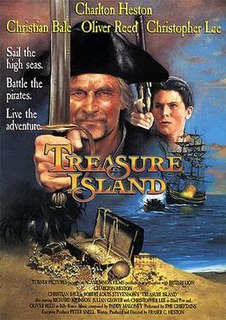 John Stanley Livingstone Harris was a Scottish composer, producer, arranger, conductor, and musical director. He lived in the United States from 1972 until his death.

Any Number Can Play is a 1949 drama film directed by Mervyn LeRoy. It is based on Edward Harris Heth's novel of the same name. It stars Clark Gable and Alexis Smith.

Vice Versa is a 1916 British silent fantasy film directed by Maurice Elvey and starring Charles Rock, Douglas Munro and Guy Newall. It is an adaptation of the 1882 novel Vice Versa by Thomas Anstey Guthrie. The screenplay concerns a schoolboy who magically swaps places with his pompous father. 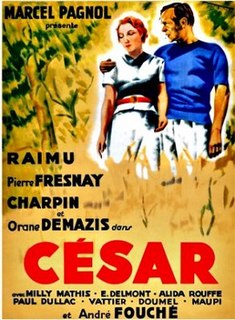 César is a 1936 French film, written and directed by Marcel Pagnol. It is the final part of his Marseille trilogy, which began with the film Marius and was followed by Fanny. Unlike the other two films in the trilogy, César was not based on a play by Pagnol, but written directly as a film script. In 1946 Pagnol adapted the script as a stage play.

Frederick Volpe, sometimes printed Volpé, was an English actor. He made his stage debut in his early twenties. From 1894 until his death he was a familiar figure on the West End stage, generally in undemanding comedies and other ephemeral productions. Among others, he created the role of Alexis in The Girl in the Taxi (1913). He made several films, beginning in 1917.