pronunciation  (help·info), real name Vijay Madhav Thackersey (12 October 1911 – 27 October 1987) was an Indian cricketer. A right-hand batter and occasional right-arm medium pace bowler, Merchant played first-class cricket for Bombay cricket team as well as 10 Test matches for India between 1929 and 1951. Behind his limited Test appearances, he dominated Indian domestic cricket – his batting average of 71.64 is the second highest first-class average in history, behind only that of Don Bradman. [1] He is regarded as the founder of the Bombay School of Batsmanship, that placed more importance on right technique, steely temperament, and conservative approach rather than free flow of the bat, a tradition broken and remoulded only after the arrival of Sachin Tendulkar.

His international career included two tours of England upon which he scored over 800 runs. English cricketer C. B. Fry exclaimed "Let us paint him white and take him with us to Australia as an opener." [1] His brother, Uday, also played first-class cricket.

Besides cricket, he was also associated with the Hindoostan Spinning & Weaving Mills (Thakersey Group).

Merchant was born in Bombay, into a wealthy family in 1911. He was an "outstanding college cricketer" who captained Sydenham College, while studying there; [1] his success for Sydenham led to selection for Hindus cricket team during the 1929 Bombay Quadrangular. He also continued to play for Sydenham and in 1931 he set the record in Bombay inter-collegiate cricket by scoring 504 runs and taking 29 wickets. His continued success in domestic cricket resulted in the call to the India national team to play against the visiting English team at Bombay Gymkhana, which was also the first Test to be played on Indian soil. [2] Throughout his career, Merchant was involved in a rivalry with the other great Indian batsman of the era, Vijay Hazare. In the Bombay Pentangular match against the Rest, he bested Hazare's record of 242, set just in the previous match against the Muslims, with 250 not out. Hazare responded with a 309 out of a team total of 387 in the next innings, in what is generally held[ by whom? ] the greatest innings ever played in India before 1947. Merchant topped it by scoring 359 against Maharashtra in Ranji trophy.[ citation needed ]

Merchant's Test career spanned 18 years but during that time he played only ten Test matches, and was unfortunate that some of the best years of his career were lost to the Second World War, when no international cricket was played. He also missed tours to Australia and the West Indies due to poor health. [1] However, Merchant went out to score 154 in his last Test match against England in Delhi, which was also his highest Test score. A shoulder injury incurred while fielding in that game forced him to retire. All ten matches of Merchant's Test career were against England.

Merchant had a particularly successful England tour of 1946. Despite facing difficulty against swing bowling when the ball moved away after pitching on the leg stump, he scored 2,385 runs including seven centuries in the 41 innings he batted, at an average of 74.53. In his column, former cricketer Learie Constantine wrote, "... this (Merchant) world-beater so adapted himself to the circumstances that he produced cricket of the highest class, never refusing the challenge to score when the dice was not too heavily loaded against the side." [3]

Merchant went on to become a cricket administrator, broadcaster, writer and national selector, and charitable advocate of the handicapped. [1]

"Cricket with Vijay Merchant" was a radio programme hosted by Merchant. It was broadcast on Sunday afternoons, [4] on Vividh Bharati, Anu D. Aggarwal quotes a survey, which revealed that it was one of the most listened to sponsored programmes. [5]

Although Vijay Merchant played only ten Test matches, he is widely considered to be one of the greatest batmen of his era. [1] He was an attractive stroke maker, who "developed fine footwork, and built a stroke repertoire featuring a lovely cut, grasscutting drives, a delicate glance and late-cut, and, until later in his career, a brilliant hook stroke." [1] His batting average in first-class cricket was 71.64, putting him second only to Don Bradman of Australia. In India's domestic Ranji Trophy matches, he fared even better, averaging 98.75 in 47 innings. His record is especially impressive as his runs came at a time of uncovered wickets. Merchant was one of the five Wisden Cricketers of the Year in 1937. Vijay Merchant is also the oldest Indian player to score a Test century. He scored 154 when he was 40 years 21 days in India vs England match in 1951–52 series. [1]

During his career, he scored eleven double-centuries in first-class cricket, the most by an Indian batsman. The record stood until November 2017, when Cheteshwar Pujara scored his twelfth double-century batting for Saurashtra against Jharkhand in the 2017–18 Ranji Trophy. [6] [7]

Vijay Laxman Manjrekarpronunciation (help·info) was an Indian cricketer who played 55 Tests. He represented several teams in his first-class career. A small man, he was a fine cutter and hooker of the ball. He is the father of Sanjay Manjrekar.

Rustomji Sheriyar 'Rusi' Modipronunciation (help·info) was an Parsi Indian batsman who played for the Indian National Cricket Team from 1946 to 1952.

Gul Mohammadpronunciation (help·info), sometimes referred to as Gul Mahomed, played Test cricket for India and Pakistan. He was educated at Islamia College, Lahore.

Chetan Pratap Singh Chauhan was a cricketer who played 40 Test matches for India. He played Ranji Trophy for Maharashtra and Delhi. He played most of his international cricket in the late 1970s and was the regular opening partner of Sunil Gavaskar during that period. Chetan Chauhan was appointed as Chairman of NIFT from June 2016 to June 2017. He was also twice elected to the Lok Sabha from Amroha in Uttar Pradesh, in 1991 and 1998. From 2018 to 2020, he was minister for youth and sports in the state of Uttar Pradesh, India.

Ashok Mulvantrai Mankadpronunciation (help·info) was an Indian cricketer. A right-handed batsman, he played for India in 22 Test matches.

Abbas Ali Baigpronunciation (help·info) is an Indian former cricketer who played in 10 Tests between 1959 and 1967. In a career spanning 21 years, he scored 12,367 runs in first-class cricket at an average of 34.16. He coached the Indian cricket team during its tour to Australia in 1991–92 and the 1992 Cricket World Cup. 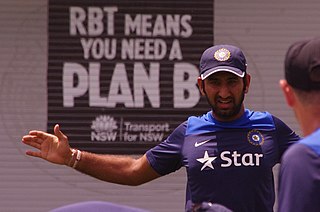 Cheteshwar Arvind Pujara is an Indian international cricketer who plays Test cricket for India and represents Saurashtra in domestic cricket. He is a right-handed batsman who made his first-class debut for Saurashtra in December 2005 and made his Test debut at Bangalore in October 2010. As of May 9th 2021, he is ranked as the world No.14 Test batsman, according to the ICC Player Rankings with a tally of 697 points. 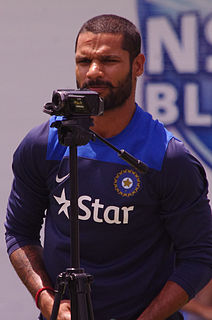 Shikhar Dhawan is an Indian international cricketer and a former limited overs captain. A left-handed opening batsman and an occasional right-arm off break bowler, he plays for Delhi in first-class cricket and Delhi Capitals in the IPL. He played for the Indian Under-17 and Under-19 teams before making his first-class debut for Delhi in November 2004. At the 2013 Champions Trophy, 2015 World Cup and 2017 Champions Trophy, Dhawan was the leading run-scorer for India. He is the fastest Indian to reach 3,000 ODI runs. In December 2017, he became the 2nd fastest Indian to reach 4000 ODI runs. He was awarded the 'Player of the Tournament' for his exploits in the 2013 ICC Champions Trophy and became the third Indian after Sachin Tendulkar and Yuvraj Singh to win this award in ICC tournaments.

Murali Vijay is an Indian international cricketer who plays as a right-handed opening batsman. He was a regular member of the Indian Test team until 2018 and plays for Tamil Nadu in domestic first-class cricket.

Priyank Kiritbhai Panchal is an Indian cricketer. He is a right-handed batsman and a right-arm medium-pace bowler who plays for Gujarat. He was born in Ahmedabad.

The Australian cricket team toured India from 12 February to 26 March 2013, played a four-match Test series against India. During the 1st Test, Mahendra Singh Dhoni set the highest score by an Indian Test captain, scoring 224 runs, beating the previous record held by Sachin Tendulkar. India won the four Test series in a 4–0 whitewash to win the Border–Gavaskar Trophy. This was first time Australia lost a test series 4-0 after their defeat against South africa in 1970. 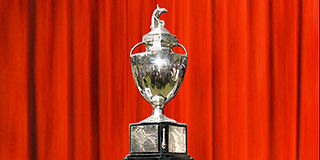 The 1943–44 Ranji Trophy was the tenth season of the Ranji Trophy. Western India won their only title defeating Bengal in the final. 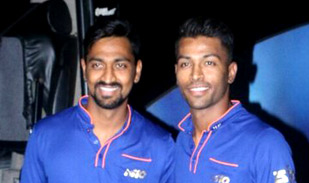 Krunal Himanshu Pandya is an Indian international cricketer who plays for Baroda in domestic cricket, and Mumbai Indians in the IPL. He is an all-rounder who bats left-handed and bowls slow left-arm orthodox. He made his international debut for the Indian cricket team in November 2018. In 2021, he scored the fastest half-century by a cricketer on ODI debut.

Shubman Gill is an Indian international cricketer who plays for Punjab in domestic cricket and for the Kolkata Knight Riders in the Indian Premier League (IPL) as a right-handed opening batsman. He made his first-class debut for Punjab against Bengal in the 2017–18 Ranji Trophy, in late 2017, with a half-century in the game, and 129 runs in the next match against Services. He made his international debut for the Indian cricket team in January 2019.