Vincent Jay (born 18 May 1985) is a former French biathlete and non-commissioned officer. [1] During his career, he won two Olympic medals at the 2010 Winter Olympics in Vancouver - a gold in the sprint and a bronze medal in the pursuit. He was the first Frenchman to win an Olympic sprint Biathlon title. In the World Cup, he has fourteen podiums with two individual victories in Vancouver and two victories as part of relay teams.

His Olympic victory came one year after his first victory in World Cup at the same venue. He was not considered a favourite to win gold but was seen as the fourth man in the French team after Vincent Defrasne, and Simon and Martin Fourcade. He caused surprise by winning France's first gold medal at the 2010 Olympic Games. He followed this up with a bronze medal in the pursuit two days later. This event gave him a level of fame in the media for which he wasn't prepared. After two seasons in halftone, he announced his retirement from the sport because of disappointing results in December 2012. In his last race he helped the French team to a second place in a World Cup relay in Hochfilzen. [4]

Following his retirement, Jay was appointed as the director of the Sports Club of Val d'Isere in July 2014. [6]

All results are sourced from the International Biathlon Union. [7]

*During Olympic seasons competitions are only held for those events not included in the Olympic program. 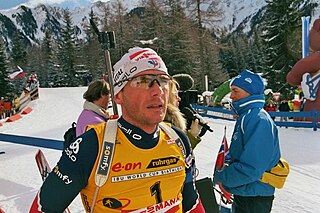 Raphaël Poirée is a retired French biathlete who was active from 1995 to 2007. With his 44 World Cup victories and several World Championship medals he ranks among the most successful biathletes ever.

Vincent Vittoz is a French former cross-country skier, non-commissioned officer and coach. He grew up in the town of La Clusaz in the Northern French Alps and has been competing since 1982. He made his FIS Cross-Country World Cup debut in January 1996 in Nové Město na Moravě, finishing 22nd in a 15 km classical race. He won a gold medal in the 15 km + 15 km double pursuit at the 2005 FIS Nordic World Ski Championships in Oberstdorf. As of 2018 Vittoz is the only French cross-country skiing world champion.

Sandrine Bailly is a former French biathlete. She was most successful in the 2004–05 season, when she won the overall World Cup, and in the 2007–08 season, when she finished second. In 2003, she became world champion in the 10 km pursuit.

Marie Marchand-Arvier is a retired World Cup alpine ski racer from France. Born in Laxou, she won a silver medal in the super-G at the 2009 World Championships. She finished fifth in the combined, and sixth in the downhill.

Björn Ferry is a former Swedish biathlete and medal winning Olympian. He began competing internationally in World Cup competitions in 2001, but did not win his first international race until the 2007–2008 season. In 2007, he won gold in the mixed relay event at the Biathlon World Championships. The next year, at his third Winter Olympics appearance, he won the gold medal in the pursuit event. He started the event in 8th place as determined by the previous sprint event, but managed to overtake the race leader on the final lap.

The men's pursuit competition in biathlon at the Vancouver 2010 Olympics was held at Whistler Olympic Park in Whistler, British Columbia on February 16, 2010. It was won by Swedish athlete Björn Ferry, after both Ferry and second place finisher Christoph Sumann of Austria successfully pursued and overtook the leader at the start of the race, France's Vincent Jay.

Lowell Bailey is an American biathlon coach and retired biathlete who competed from 2001 until 2018. 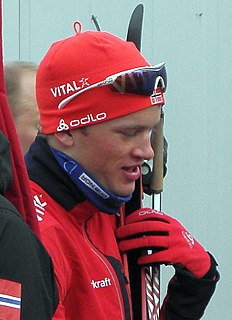 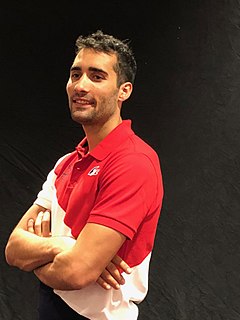 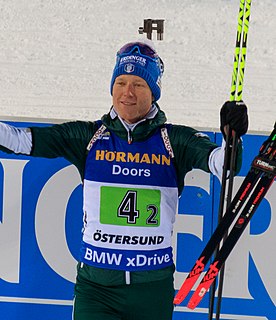 Lukas Hofer is an Italian biathlete.