West Kent College is a further education and higher education college in Kent, England founded in 2014. Its campus in Tonbridge offers numerous courses and qualifications at many levels, from GCSEs and A-levels to vocational routes such as BTEC or NVQ/VRQ Diplomas to work-based Apprenticeships and Degree programmes, validated by the University of Kent, University of Greenwich and Canterbury Christ Church University.

It merged into K College in 2010. K College operated across 6 campuses, at Jemmett Road and Henwood in Ashford, Dover, Folkestone, Tonbridge and Royal Tunbridge Wells. [2]

It was subsequently split in 2014, after sustaining a large amount of debt. It was split into two units from 1 August that year:

The college offers a range of Foundation, Extended and BTEC Diplomas, A Levels, Higher Education programmes and NVQs, in subjects such as: 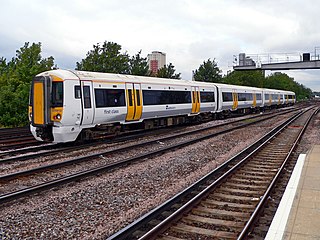 South Eastern Trains was a publicly owned train operating company that operated the South Eastern Passenger Rail Franchise between November 2003, when it took over from Connex South Eastern, and 1 April 2006, when Southeastern began operating the new Integrated Kent franchise.

Sevenoaks railway station is on the South Eastern Main Line in England, serving the town of Sevenoaks, Kent. It is 22 miles 9 chains (35.6 km) down the line from London Charing Cross and is situated between Dunton Green and Hildenborough stations. Trains calling at the station are operated by Southeastern and Thameslink. 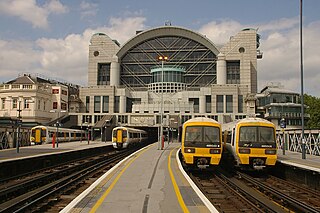 The South Eastern main line is a major long-distance railway route in South East England, UK, one of the three main routes crossing the county of Kent, going via Sevenoaks, Tonbridge, Ashford and Folkestone to Dover. The other routes are the Chatham main line which runs along the north Kent coast to Ramsgate or Dover via Chatham and High Speed 1 which runs through the centre of Kent to the coast at Folkestone where it joins the Channel Tunnel.

Transportation needs within the county of Kent in South East England has been served by both historical and current transport systems.

The Kent County Council election, 2009 was an election to all 84 seats on Kent County Council held on 2 May as part of the 2009 United Kingdom local elections. 84 councillors were elected from 72 electoral divisions, which returned either one or two county councillors each by first-past-the-post voting for a four-year term of office. The electoral divisions were the same as those used at the previous election in 2005. No elections were held in Medway, which is a unitary authority outside the area covered by the County Council.

London 2 South East is an English level 7 Rugby Union League. When this division began in 1987 it was known as London 3 South East, changing to its current name ahead of the 2009–10 season. The division is made up of teams predominantly from south-east London, Kent, East Sussex and West Sussex. The twelve teams play home and away matches from September through to April. Each year all clubs in the division also take part in the RFU Intermediate Cup - a level 7 national competition.

The county of Kent is divided into 13 districts. The districts of Kent are Ashford, Canterbury, Dartford, Dover, Folkestone and Hythe, Gravesham, Maidstone, Medway, Tonbridge and Malling, Tunbridge Wells, Sevenoaks, Swale and Thanet.

The Kent League was a football league which existed from 1894 until 1959, based in the English county of Kent. Another, unrelated, Kent League was formed in 1966, and is now known as the Southern Counties East Football League.