The Westerdijk Institute, or Westerdijk Fungal Biodiversity Institute, is part of the Royal Netherlands Academy of Arts and Sciences. The institute was renamed on 10 February 2017, after Johanna Westerdijk, the first female professor in the Netherlands and director of the institute from 1907 to 1958. The former name of the institute was CBS-KNAW Fungal Biodiversity Centre or Centraalbureau voor Schimmelcultures (Central Bureau of Fungal Cultures in English). Despite the name change the collection maintained by the institute remains the CBS collections and the use of CBS numbers for the strains continues.

The institute is located in Utrecht Science Park, a suburb of Utrecht. Before it had been located between offices at the university in Delft and in Baarn. CBS was established in 1904 as a collection of living fungi and algae at the Eleventh International Botanical Congress in Vienna. Since 2002 Pedro Willem Crous has been director of CBS as the successor of Dirk van der Mei.

Since its inception the institute has built one of the world's largest collections of fungi, yeasts and bacteria. The collection serves as an International standard for microbiologists, ecologists and geneticists.

The institute is roughly divided into two parts: Collection Management and Research. Researchers carry out investigations in taxonomy (biology) and evolutionary biology of fungi, ecological and genomic issues are often involved. The institute also acts as a centre of expertise for questions related to fungi, yeasts and bacteria from scientists, business, government and the public. The institute also organises courses in general mycology, medical mycology, mycology relating to food and to the built environment. The CBS collection has been recognised as a repository of proprietary molds, yeasts and bacteria. The Institute carries out identifications of microorganisms for third parties and advises on problems caused by fungi and yeasts.

Presently there are eight research groups: [1]

The Westerdijk Institute hosts and manages the Mycobank fungal database, and is responsible for the mycological journals Studies in Mycology, and Fungal Systematics and Evolution (FUSE). [2] In collaboration with the National Herbarium of the Netherlands the mycological journal Persoonia [3] is produced. The institute holds the library of the Dutch Mycological Society and members can consult and borrow books.

CBS employees contribute to data in the Index Fungorum and the Dutch Species Register. [4] CBS Fungal Biodiversity and NCB Naturalis (Dutch Centre for Biodiversity) are setting up joint facilities for DNA Barcoding of organisms in Leiden and Utrecht as part of the project Arise.

Christiaan Hendrik Persoon was a German mycologist who made additions to Linnaeus' mushroom taxonomy.

Richard C. Summerbell is a Canadian mycologist, author and award-winning songwriter. He was editor in chief of an international scientific journal in mycology from 2000 to 2004. In the 1970s and 80s, he was a gay activist and an early commentator on (then) controversial topics such as AIDS and promiscuity and attitudes to homosexuality in organized religion.

Marinus Anton Donk was a Dutch mycologist. He specialized in the taxonomy and nomenclature of mushrooms. Rolf Singer wrote in his obituary that he was "one of the most outstanding figures of contemporary mycology." 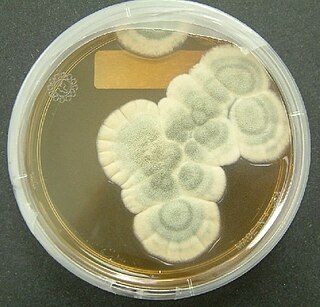 Penicillium chrysogenum is a species of fungus in the genus Penicillium. It is common in temperate and subtropical regions and can be found on salted food products, but it is mostly found in indoor environments, especially in damp or water-damaged buildings. It has been recognised as a species complex that includes P. notatum, P. meleagrinum, and P. cyaneofulvum, but molecular phylogeny established that it is a distinct species and that P. notatum is P. rubens. It has rarely been reported as a cause of human disease. It is the source of several β-lactam antibiotics, most significantly penicillin. Other secondary metabolites of P. chrysogenum include roquefortine C, meleagrin, chrysogine, 6-MSA YWA1/melanin, andrastatin A, fungisporin, secalonic acids, sorbicillin, and PR-toxin.

Veronaea is a genus of ascomycete fungi, classified in the family Herpotrichiellaceae. The genus was defined by R. Ciferri and A. Montemartini in 1958.

“Black yeasts”, sometimes also black fungi, dematiaceous fungi, microcolonial fungi or meristematic fungi is a diverse group of slow-growing microfungi which reproduce mostly asexually. Only few genera reproduce by budding cells, while in others hyphal or meristematic (isodiametric) reproduction is preponderant. Black yeasts share some distinctive characteristics, in particular a dark colouration (melanisation) of their cell wall. Morphological plasticity, incrustation of the cell wall with melanins and presence of other protective substances like carotenoids and mycosporines represent passive physiological adaptations which enable black fungi to be highly resistant against environmental stresses. The term "polyextremotolerance" has been introduced to describe this phenotype, a good example of which is the species Aureobasidium pullulans. Presence of 1,8-dihydroxynaphthalene melanin in the cell wall confers to the microfungi their characteristic olivaceous to dark brown/black colour.

André Aptroot is a Dutch mycologist and lichenologist.

Teratosphaeriaceae is a family of fungi in the order Capnodiales.

Johanna Westerdijk was a Dutch plant pathologist and the first female professor in the Netherlands.

Persoonia is an English-language peer-reviewed scientific journal that publishes research within the disciplines of taxonomy, molecular systematics, and evolution of fungi. The journal, established in 1959, is edited by József Geml and Pedro W. Crous, and is published jointly by the National Herbarium of the Netherlands and the Centraalbureau voor Schimmelcultures (CBS) Fungal Biodiversity Centre.

Pieter Baas is a Dutch botanist. He is an emeritus professor of plant systematics at Leiden University. He served as director of the Rijksherbarium of Leiden University between 1991 and 1999. When the institute was faced with budget cuts in 1993 he managed to preserve the collection by joining it with the university collections of Wageningen and Utrecht. This led to the founding of the National Herbarium of the Netherlands in 1999. Baas subsequently became director of the institute and served until 2005. As a botanist Baas specializes in wood anatomy.

Mucor circinelloides is a dimorphic fungus belonging to the Order Mucorales. It has a worldwide distribution, found mostly in soil, dung and root vegetables. This species is described as not known to be able to produce mycotoxins, however it has been frequently reported to infect animals such as cattle and swine, as well as fowl, platypus and occasionally humans. Ketoacidotic patients are particularly at risk for infection by M. circinelloides.

John Waldo Taylor is an American scientist who researches fungal evolution and ecology. He is Professor of the Graduate School in the Department of Plant and Microbial Biology at the University of California, Berkeley.

Lentomitella is a genus of fungus in the family Xenospadicoidaceae.

Xenospadicoidaceae is a family of fungus first described in 2017. Its parent taxon, Xenospadicoidales, is a monotypic order in the class Sordariomycetes.

Crepidotus praecipuus, is a species of fungi in the family Crepidotaceae first described in 2018. It is commonly known as a rusty-gilled conch, along with other kidney shaped, rusty-brown spored species of Crepidotus. It is saprobic on wood, like other Crepidotus species.