The novel depicts Hal and Roger's journey on a whaling ship with anachronistic, nineteenth century features such as harpooning by hand, hard tack, the brig, and keel-hauling. Price borrows the setting and many key events from Herman Melville's Moby-Dick .

A scientist travels in the ship as a passenger. The captain of the ship does not agree to accommodate any more passengers, so the only way the boys may go on the journey is to join the crew.

Roger defends a captured sperm whale against a group of sharks and later a pack of killer whales. This novel also explain how clever killer whales are.

The captain of the ship is a ruthless man who tortures and punishes the crew. He is beaten by Hal in a hand-to-hand fight. When an old sailor, who is keelhauled as a punishment, is eaten by a shark, the crew takes the control of the ship, confining the captain and his henchman in the cage.

In the end of the story, their ship was destroyed by a sperm whale and they were saved by a modern whaler with a whale-spotting helicopter.

Moby-Dick; or, The Whale is an 1851 novel by American writer Herman Melville. The book is the sailor Ishmael's narrative of the obsessive quest of Ahab, captain of the whaling ship Pequod, for revenge on Moby Dick, the giant white sperm whale that on the ship's previous voyage bit off Ahab's leg at the knee. A contribution to the literature of the American Renaissance, Moby-Dick was published to mixed reviews, was a commercial failure, and was out of print at the time of the author's death in 1891. Its reputation as a "Great American Novel" was established only in the 20th century, after the centennial of its author's birth. William Faulkner said he wished he had written the book himself, and D. H. Lawrence called it "one of the strangest and most wonderful books in the world" and "the greatest book of the sea ever written". Its opening sentence, "Call me Ishmael", is among world literature's most famous. 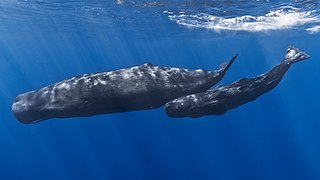 Essex was an American whaler from Nantucket, Massachusetts, which was launched in 1799. In 1820, while at sea in the southern Pacific Ocean under the command of Captain George Pollard Jr., she was attacked and sunk by a sperm whale. Thousands of miles from the coast of South America with little food and water, the 20-man crew was forced to make for land in the ship's surviving whaleboats.

The cetologyof Herman Melville's 1851 novel, Moby-Dick, is Ishmael's zoological classification of whales. Although a work of fiction, Melville included sequences of chapters concerned largely with a pseudo-objective discussion of the properties of whales. The observations, based on a list of sources in addition to Melville's own experiences in whaling in the 1840s, include observations of various species from the order of Cetacea. These chapters are the most likely to be omitted in abridged versions of the novel.

Pequod is a fictional 19th-century Nantucket whaling ship that appears in the 1851 novel Moby-Dick by American author Herman Melville. Pequod and her crew, commanded by Captain Ahab, are central to the story, which, after the initial chapters, takes place almost entirely aboard the ship during a three-year whaling expedition in the Atlantic, Indian and South Pacific oceans. Most of the characters in the novel are part of Pequod's crew, including the narrator Ishmael.

Owen Chase was first mate of the whaler Essex, which a sperm whale rammed and sank on 20 November 1820. Chase wrote about the incident in Narrative of the Most Extraordinary and Distressing Shipwreck of the Whale-Ship Essex. This book, published in 1821, would inspire Herman Melville to write Moby-Dick. Chase was born in Nantucket, Massachusetts, the son of Phebe (Meader) and Judah Chase. 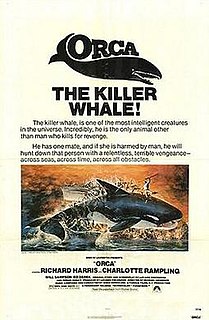 Orca is a 1977 American thriller film directed by Michael Anderson and produced by Dino De Laurentiis, starring Richard Harris, Charlotte Rampling and Will Sampson. It is based on Arthur Herzog's novel of the same name. The film follows a male orca whale tracking down and getting revenge on a boat captain for killing the whale's pregnant mate and their unborn calf. 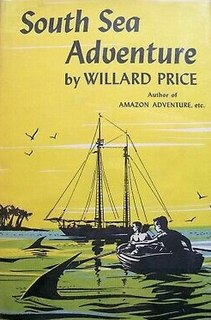 Volcano Adventure is a 1956 children's book by the Canadian-born American author Willard Price featuring his "Adventure" series characters, Hal and Roger Hunt. It depicts a journey to several of the world's most dangerous volcanoes. The story involves the brothers meeting a volcanologist and deals with volcanology, perhaps one of the more scientific of Price's novels. 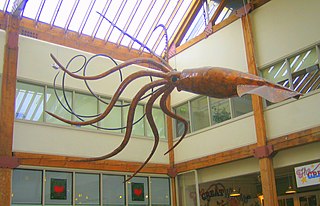 The giant squid's elusive nature and fearsome appearance have long made it a popular subject of legends and folk tales. Its popularity as an image continues today with references and depictions in literature, film, television, and video games.

Sperm whaling is the hunting of these marine mammals for the oil, meat and bone that can be extracted from their bodies. Sperm whales, a large and deep-diving species, produce a waxy substance that was especially useful during the Industrial Revolution, and so they were targeted in 19th-century whaling, as exemplified in Moby Dick. Sperm oil is no longer needed, but another unusual product, ambergris, is still valued as a perfume fixative. Although the animal is classified as a vulnerable species, aboriginal whaling in limited numbers is still permitted, notably from two villages in Indonesia, for subsistence.

The Lost Continent is a 1968 adventure film made by Hammer Films and Seven Arts featuring Eric Porter, Hildegard Knef, Suzanna Leigh, Tony Beckley, and James Cossins. The film was produced, directed and written by Michael Carreras based on Dennis Wheatley's novel Uncharted Seas (1938).

Samson & Sally is a 1984 Danish animated fantasy drama film, directed by Jannik Hastrup and based on the novel The Song of the Whales by Danish author Bent Haller. The story is darker than most animated films of the time.

"Möbius Dick" is the fifteenth episode of the sixth season of the animated sitcom Futurama, and originally aired August 4, 2011 on Comedy Central. The episode was written by Dan Vebber and directed by Dwayne Carey-Hill. In the episode, the Planet Express crew pass through an area in space known as the Bermuda Tetrahedron, where many other ships passing through the area have mysteriously disappeared, including that of the first Planet Express crew. While exploring the area, a mysterious four-dimensional space whale devours the ship's engine, leaving them stranded in the area. The ship's captain, Leela, becomes obsessed with hunting down the whale.

The Undersea Adventures of Captain Nemo is a Canadian animated television series of five-minute cartoons produced in 1975 by Rainbow Animation in Toronto, Ontario. The series follows the underwater adventures of Captain Mark Nemo and his two young assistants, Christine and Robbie, in their nuclear-powered submarine, the Nautilus.

Moby Dick is a 1998 American television miniseries based on Herman Melville's 1851 novel of the same name. It was filmed in Australia in 1997 and first released in the United States in 1998. The miniseries consisted of two episodes, each running two hours with commercials on March 15 and 16 of 1998 on the USA Network.