Joseph Whitaker began preparing his Almanack in the autumn of 1868. [7] He postponed publication of the first edition on learning of the resignation of Benjamin Disraeli on 1 December 1868, so that he could include details of the new Gladstone administration. At the same time, Whitaker continued to expand the information so that the initially planned 329 pages grew to 370. The first edition of the Almanack appeared on 23 December 1868, [8] priced at 1 shilling, introduced by a short editorial piece written by Joseph Whitaker. It began "The Editor does not put forward this Almanack as perfect: yet he ventures to think that he has succeeded in preparing a work which will commend itself to those who desire to see improvement in this direction." It concluded by inviting critics to suggest ways in which improvements could be made. [9]

The Manchester Guardian , reviewing the first edition, described it as "the largest of the cheap almanacks" to appear, and noted it contained a great deal more valuable information than other such works. [10] In 2013, the 2014 edition became the first to be published under the new simpler branding of "Whitaker's". [11]

Whitaker's Almanack consists of articles, lists and tables on a wide range of subjects including education, the peerage, government departments, health and social issues, and the environment. [12]

The largest section is the countries directory, which includes recent history, politics, economic information and culture overviews. [12] Each edition also features a selection of critical essays focusing on events of the previous year. Extensive astronomical data covering the forthcoming year is published at the rear of the book. [12]

Whitaker's was prized enough that Winston Churchill took a personal interest in the continued publication of the book after its headquarters were destroyed in the Blitz. A copy is also sealed in Cleopatra's Needle on the north bank of the River Thames. [13]

Each year the Almanack is published in two formats – the Standard Edition and a shortened Concise Edition. In previous years, a larger-format of the Standard Edition, bound in leather, was produced for libraries. In 2016, Whitaker's launched its online edition through its website, which was updated weekly with free-to-view and subscription only content. [13]

Benjamin Banneker was a free African-American almanac author, surveyor, landowner and farmer who had knowledge of mathematics and natural history. Born in Baltimore County, Maryland, to a free African-American woman and a former slave, Banneker had little or no formal education and was largely self-taught. He became known for assisting Major Andrew Ellicott in a survey that established the original borders of the District of Columbia, the federal capital district of the United States.

The World Almanac and Book of Facts is a US-published reference work, an almanac conveying information about such subjects as world changes, tragedies, and sports feats. It has been published yearly from 1868 to 1875, and again every year since 1886.

An almanac is an annual publication listing a set of current information about one or multiple subjects. It includes information like weather forecasts, farmers' planting dates, tide tables, and other tabular data often arranged according to the calendar. Celestial figures and various statistics are found in almanacs, such as the rising and setting times of the Sun and Moon, dates of eclipses, hours of high and low tides, and religious festivals. The set of events noted in an almanac may be tailored for a specific group of readers, such as farmers, sailors, or astronomers. 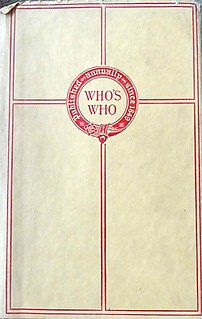 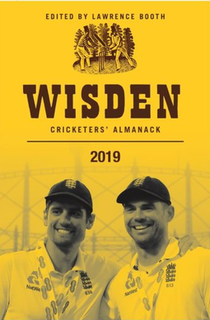 Wisden Cricketers' Almanack, or simply Wisden, colloquially the Bible of Cricket, is a cricket reference book published annually in the United Kingdom. The description "bible of cricket" was first used in the 1930s by Alec Waugh in a review for the London Mercury. In October 2013, an all-time Test World XI was announced to mark the 150th anniversary of Wisden Cricketers' Almanack.

Montrose Burghs was a district of burghs constituency represented in the House of Commons of the Parliament of the United Kingdom from 1832 until 1950.

Linlithgowshire was a Scottish county constituency of the House of Commons of the Parliament of the United Kingdom from 1708 to 1950. It elected one Member of Parliament (MP) by the first past the post voting system. It was replaced in 1950 by an equivalent constitiuency named West Lothian. 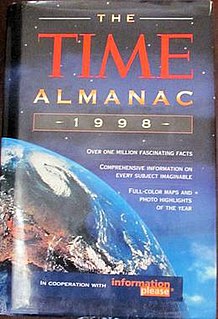 The New York Times Almanac was an almanac published in the United States. There were two separate and distinct series of almanacs by this name.

The Bookseller is a British magazine reporting news on the publishing industry. Philip Jones is editor-in-chief of the weekly print edition of the magazine and the website. The magazine is home to the Bookseller/Diagram Prize for Oddest Title of the Year, a humorous award given annually to the book with the oddest title. The award is organised by The Bookseller's diarist, Horace Bent, and had been administered in recent years by the former deputy editor, Joel Rickett, and former charts editor, Philip Stone. We Love This Book is its quarterly sister consumer website and email newsletter.

Der Fischer Weltalmanach was an almanac, a popular publication of the information issued in Frankfurt on Main, Germany, created at the end of each year since 1959 by a team of Fischer Taschenbuch Verlag. In September 2018, the 60th and last edition will be published. Due to reduced demand, and the Internet having cheaper options, no further editions are produced.