General knowledge is information that has been accumulated over time through various mediums, sources. [1] It excludes specialized learning that can only be obtained with extensive training and information confined to a single medium. General knowledge is an essential component of crystallized intelligence. It is strongly associated with general intelligence and with openness to experience. [2]

High scorers on tests of general knowledge tend to also score highly on intelligence tests. IQ has been found to robustly predict general knowledge scores even after accounting for differences in age, and five-factor model personality traits. [7] [8] [9] However, many general knowledge tests are designed to create a normal distribution of answers, creating a bell-shaped curve. [10]

General knowledge is also moderately associated with verbal ability, though only weakly or not at all with numerical and spatial ability. [3] As with crystallized intelligence, general knowledge has been found to increase with age. [11]

General knowledge is stored as semantic memory. [12] Most semantic memory is preserved through old age, though there are deficits in retrieval of certain specific words correlated with aging. [12] In addition, stress or various emotional levels can negatively affect semantic memory retrieval. [12]

People high in general knowledge [13] tend to be highly open to new experiences [7] [8] [9] [11] and in typical intellectual engagement. [8] [9] The relationship between openness to experience and general knowledge remains robust even when IQ is taken into account. [7] [9] People high in openness may be more motivated to engage in intellectual pursuits that increase their knowledge. [9] Relationships between general knowledge and other five factor model traits tend to be weak and inconsistent. Though one study found that extraversion and neuroticism were negatively correlated with general knowledge, [8] others found that they were unrelated. [7] [11] Inconsistent results have also been found for conscientiousness. [note 1]

A number of studies have assessed whether performance on a general knowledge test can predict achievement in particular areas, namely in academics, [14] proofreading, [15] and creativity. [16]

Emotional intelligence (EI) is most often defined as the ability to perceive, use, understand, manage, and handle emotions. People with high emotional intelligence can recognize their own emotions and those of others, use emotional information to guide thinking and behavior, discern between different feelings and label them appropriately, and adjust emotions to adapt to environments. Although the term first appeared in 1964, it gained popularity in the 1995 best-selling book Emotional Intelligence, written by science journalist Daniel Goleman. Goleman defined EI as the array of skills and characteristics that drive leadership performance.

Creativity is a phenomenon whereby something new and valuable is formed. The created item may be intangible or a physical object.

Human intelligence is the intellectual capability of humans, which is marked by complex cognitive feats and high levels of motivation and self-awareness. High intelligence is associated with better outcomes in life.

Conscientiousness is the personality trait of being careful, or diligent. Conscientiousness implies a desire to do a task well, and to take obligations to others seriously. Conscientious people tend to be efficient and organized as opposed to easy-going and disorderly. They exhibit a tendency to show self-discipline, act dutifully, and aim for achievement; they display planned rather than spontaneous behavior; and they are generally dependable. It is manifested in characteristic behaviors such as being neat, and systematic; also including such elements as carefulness, thoroughness, and deliberation.

Openness to experience is one of the domains which are used to describe human personality in the Five Factor Model. Openness involves six facets, or dimensions: active imagination (fantasy), aesthetic sensitivity, attentiveness to inner feelings, preference for variety (adventurousness), intellectual curiosity, and challenging authority. A great deal of psychometric research has demonstrated that these facets or qualities are significantly correlated. Thus, openness can be viewed as a global personality trait consisting of a set of specific traits, habits, and tendencies that cluster together.

In the field of social psychology, illusory superiority is a condition of cognitive bias wherein a person overestimates their own qualities and abilities, in relation to the same qualities and abilities of other people. Illusory superiority is one of many positive illusions, relating to the self, that are evident in the study of intelligence, the effective performance of tasks and tests, and the possession of desirable personal characteristics and personality traits. Overestimation of abilities compared to an objective measure is known as the overconfidence effect.

The dark triad is a psychological theory of personality, first published by Delroy L. Paulhus and Kevin M. Williams in 2002, that describes three notably offensive, but non-pathological personality types: Machiavellianism, sub-clinical narcissism, and sub-clinical psychopathy. Each of these personality types are called dark because each is considered to contain malevolent qualities. 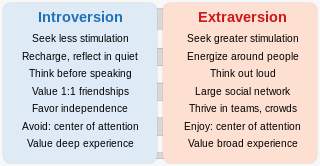 Typical intellectual engagement (TIE) is a personality construct referring to a person's enjoyment of intellectually demanding activities. TIE was developed to identify aspects of personality most closely related to intelligence and knowledge and measures a person's typical performance in intellectual domains rather than their maximal performance. TIE is moderately positively associated with crystallized intelligence, and with general knowledge, and predicts academic performance. TIE is hard to distinguish from the earlier construct need for cognition and is positively correlated with openness to experience.

The psychology of music preference is the study of the psychological factors behind peoples' different music preferences. Music is heard by people daily in many parts of the world, and affects people in various ways from emotion regulation to cognitive development, along with providing a means for self-expression. Music training has been shown to help improve intellectual development and ability, though no connection has been found as to how it affects emotion regulation. Numerous studies have been conducted to show that individual personality can have an effect on music preference, mostly using personality, though a recent meta-analysis has shown that personality in itself explains little variance in music preferences. These studies are not limited to American culture, as they have been conducted with significant results in countries all over the world, including Japan, Germany, Spain, and Brazil.

Tomas Chamorro-Premuzic is an organizational psychologist who works mostly in the areas of personality profiling, people analytics, talent identification, the interface between human and artificial intelligence, and leadership development. He is currently a professor of business psychology at University College London (UCL) and an adjunct professor at Columbia University, as well as the Chief Talent Scientist at ManpowerGroup, and was previously the CEO at Hogan Assessment Systems.

A self-test of intelligence is a psychological test that someone can take to purportedly measure one's own intelligence.

Intellectual curiosity is curiosity that leads to an acquisition of general knowledge. It can include curiosity about such things as what objects are composed of, the underlying mechanisms of systems, mathematical relationships, languages, social norms, and history. It can be differentiated from another type of curiosity that does not lead to the acquisition of general knowledge, such as curiosity about the intimate secrets of other people. It is a facet of openness to experience in the Five Factor Model used to describe human personalities. It is similar to need for cognition and typical intellectual engagement.