Zondervan was founded in 1931 in Grandville, MI, a suburb of Grand Rapids, by brothers Peter ("P.J.", "Pat") and Bernard (Bernie) Zondervan, who were the nephews of publisher William B. Eerdmans. [2] [3] The company began in the Zondervans' farmhouse and originally dealt with selling remainders and publishing public domain works.

The first book it published was Women of the Old Testament by Abraham Kuyper, in 1933. [4] Within a few years it developed a list of its own, and began publishing Bible editions. The Berkeley Version appeared in 1959, and the Amplified Bible in 1965. The New International Version New Testament was published in partnership with the International Bible Society in 1973, and the complete NIV Bible appeared in 1978. [5] The company was bought by HarperCollins, a division of News Corp, in 1988, and is the company's principal Christian book publishing division. [6] Scott Macdonald was appointed President and CEO in May 2011. [7]

Zondervan also publishes many other books by Christian authors focusing on topics of interest to Christians. In the 1970s it published The Late, Great Planet Earth by Hal Lindsey, which has sold more than 30 million copies. They are also known for the Bible storytelling books of Ethel Barrett, Joni by quadriplegic Joni Eareckson Tada, Baptist minister and author Rick Warren's The Purpose Driven Life , which has sold more than 35 million copies, and Sacred Marriage, by Gary Thomas. In 2004, Zondervan expanded to include Renee Altson, Shane Claiborne, Sarah Raymond Cunningham and Margaret Feinberg, authors writing for young readers. [8]

The children's arm of the company Zonderkidz published The Jesus Storybook Bible in 2007, written by Sally Lloyd-Jones and illustrated by Jago it has sold in excess of 1 million copies in 19 languages. [9]

The NIV Zondervan Study Bible was released in 2015 during the 50th anniversary of the New International Version (NIV) translation. [10] The study Bible, edited by Dr. D. A. Carson, features over 60 evangelical contributors from multiple denominations.

Zondervan was in the Christian record business for many years with the Singspiration and Zondervan Victory labels in the 1960s, Singcord in the 70s, and the Milk & Honey Records label, starting in the late 1970s. [11]

In 1980, Zondervan and Paragon Associates bought Christian record label Benson Records in a partnership to own and operate for $3 million. [12] The resulting company was (measured by sales) one and a half times the size of its closest competitor, Word. [12] Zondervan bought out Paragon in 1983, and eventually sold Benson to Zomba Label Group in 1993, now a part of Sony BMG Music Entertainment. [13]

Pradis was the trademarked name for Zondervan's native format for biblical software. On 22 September 2009, Logos Research Systems, Inc, [14] and Zondervan announced a new partnership, and the retirement of Pradis. [15] Thirty-one titles were slated for availability in "early 2010" in the LOGOS Bible Software format. [16]

The New International Version (NIV) is an English translation of the Bible first published in 1978 by Biblica. The NIV was published to meet the need for a modern translation done by Bible scholars using the earliest, highest quality manuscripts available. Of equal importance was that the Bible be expressed in broadly understood modern English.

A study Bible is an edition of the Bible prepared for use by a serious student of the Bible. It provides scholarly information designed to help the reader gain a better understanding of and context for the text.

Benson Records was founded by Bob Benson and John T. Benson, beginning as the John T. Benson Music Publishing Company in 1902. The record label started out as Heart Warming Records and would come to house labels such as Impact Records, Greentree Records, RiverSong, StarSong, Power Discs, and Home Sweet Home. In the 1970s Impact became the top label with artists such as the Imperials, J.D. Sumner & The Stamps Quartet, the Rambos, Dottie Rambo, the Archers, the Bill Gaither Trio, and the Speer Family, and later, Sandi Patty.

The NIV Study Bible is a study Bible originally published by Zondervan in 1985 that uses the New International Version (NIV). Revisions include one in 1995, a full revision in 2002, an update in October 2008 for the 30th anniversary of the NIV, another update in 2011, and a fully revised update in 2020 named "Fully Revised Edition". Its publisher and distributors claim over nine million sold, and claim that it is the world's bestselling study bible.

The Reflecting God Study Bible is an out-of-print study Bible published by Zondervan in conjunction with the Christian Holiness Partnership. A Wesleyan revision of the NIV Study Bible, it utilizes the New International Version. Its general director, Dr. Wayne McCown, was assisted by 22 other contributors.

Family Christian headquartered in Grand Rapids, Michigan is a Christian themed web retailer. Originally a retail chain, by 2008, it was the world's largest Christian focused retailer. In 2013, the chain transitioned to a non-profit before filing for bankruptcy in 2015, closing all stores in 2017 and returning as a web retailer in 2019. 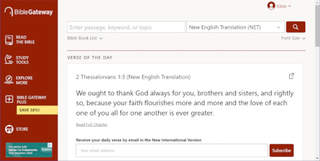 BibleGateway.com is a website designed to allow easy reading, listening, studying, searching, and sharing of the Bible in many different versions and translations, including English, French, Spanish, and other languages. Its mission statement is "To honor Christ by equipping people to read and understand the Bible, wherever they are". The website is free for anyone to use, but also offers Bible Gateway Plus, a membership program with enhanced services. It is currently owned by Zondervan.

Douglas J. Moo is a New Testament scholar who, after teaching for more than twenty years at Trinity Evangelical Divinity School in Illinois, has served as Blanchard Professor of New Testament at the Wheaton College Graduate School since 2000. He received his Ph.D. at the University of St. Andrews, in St. Andrews, Scotland.

Marshall Pickering was formed in 1981 from two long established Christian publishers. Marshall Morgan and Scott, a London-based predominantly Baptist publishing house, which had acquired a number of publishing companies over the years, such as Bagsters and Oliphants. Pickering and Inglis was a long established Glasgow based publisher, publishing largely for the non conformist church in Scotland with many Brethren publications. Marshall Pickering was acquired by Zondervan in 1983.

William D. Mounce is a scholar of New Testament Greek.

The Thompson Chain-Reference Bible is a Christian study Bible published by the Kirkbride Bible Company now published by Zondervan.

Jago is a children's book illustrator based in Wadebridge, Cornwall, UK. He attended Falmouth College of Art from 2000 to 2003. He has produced digital illustrations for a variety of publishers: Barefoot Books, Oxford University Press, Mantra Lingua and Zondervan.

Henry Hampton Halley was an American Christian Church minister and religious writer. He was best known as author of Halley's Bible Handbook, first published in 1924. 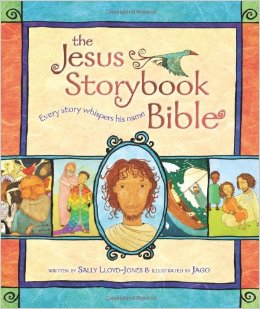 The Jesus Storybook Bible is a children's Bible written by New York Times bestselling author Sally Lloyd-Jones and illustrated by Jago from Cornwall. The first edition was published in 2007 by Zonderkidz, the children's arm of American Christian media and publishing company Zondervan.

Barry J. Beitzel is an Old Testament scholar, geographer, cartographer, and translator of the Bible. He currently resides in Mundelein, Illinois.