Zukiswa Wanner (born 1976) is a South African journalist, novelist and editor born in Zambia and now based in Kenya. Since 2006, when she published her first book, her novels have been shortlisted for awards including the South African Literary Awards (SALA) and the Commonwealth Writers' Prize. In 2015, she won the K Sello Duiker Memorial Literary Award for London Cape Town Joburg (2014). [1] In 2014 Wanner was named on the Africa39 list of 39 Sub-Saharan African writers aged under 40 with potential and talent to define trends in African literature. [2] In 2020 she was awarded the Goethe Medal alongside Ian McEwan and Elvira Espejo Ayca, making Wanner the first African woman to win the award. [3]

Zukiswa Wanner was born in 1976 in Lusaka, Zambia, to a South African father and a Zimbabwean mother. [4] After receiving primary and secondary education in Zimbabwe, she studied for a degree in journalism at Hawaii Pacific University in Honolulu.

Her debut novel, The Madams, was published in 2006 and has been called "a racy and hilarious take on the black economic empowerment crowd in Johannesburg". [5] It was shortlisted for the K Sello Duiker Award of the South African Literary Awards (SALA) in 2007. [6] She went on to write three other novels: Behind Every Successful Man (2008), Men of the South (2010), which was shortlisted for the 2011 Commonwealth Writers' Prize (Africa region), [7] as well as the Herman Charles Bosman Award, [8] [9] and 2014's London Cape Town Joburg, which won the K Sello Duiker Memorial Literary Award in 2015. [1]

In 2010, she co-authored two works of non-fiction: with South African photographer Alf Kumalo A Prisoner's Home, a biography on the first Mandela house 8115 Vilakazi Street, and L'Esprit du Sport with French photographer Amelie Debray. Wanner is co-editor of the African-Asian short-story anthology Behind the Shadows (2012) with Rohini Chowdhury. [9] In addition Wanner has written two children's books, Jama Loves Bananas and Refilwe – an African retelling of the fairy tale "Rapunzel". In 2018, her third nonfiction work Hardly Working, a travel memoir, was published by Black Letter Media. [10]

She was one of 66 writers to write a contemporary response to the Bible, the works being staged at the Bush Theatre and at Westminster Abbey in October 2011. [11]

She is a founding member of the ReadSA initiative, a campaign encouraging South Africans to read South African works. [4] [6] She also sat on the pan-African literary initiative, Writivism's Board of Trustees until September 2016. She is a regular participant at international literary events and has conducted workshops for young writers in Zimbabwe, South Africa, Denmark, Germany and Western Kenya. [9] [12]

In 2015 Wanner was also one of three judges of the Etisalat Prize for Literature, a Pan-African literary prize for book-length fiction, [13] and she was the African juror for the Commonwealth Short Story Prize 2017. She has also been the founder and curator of Artistic Encounters in Nairobi, Kenya. In 2020, in response to the COVID-19 lockdown she founded and curated the Afrolit Sans Frontieres Festival, which first took place on 23 March via Facebook and Instagram, with further editions being held subsequently. [14] The festival has featured prominent African writers including Maaza Mengiste, Fred Khumalo, Chris Abani, Yvonne Adhiambo Owuor, Shadreck Chikoti, Abubakar Adam Ibrahim, Mũkoma wa Ngũgĩ, Jennifer Nansubuga Makumbi, Mona Eltahawy, Nii Ayikwei Parkes, Sulaiman Addonia, Chike Frankie Edozien, and Lola Shoneyin, among others. [15] [16]

In 2018, Wanner set up her publishing company, Paivapo, in partnership with her friend and businessperson Nomavuso Vokwana, [17] with a focus on marketing African literature in the Anglophone, Francophone and Lusophone African regions. [18] [19]

Wanner currently lives in Nairobi, Kenya, having visited for the first time in 2008 and moved there three years later. [23]

In April 2014, Wanner was named on the Hay Festival's Africa39 list of 39 Sub-Saharan African writers aged under 40 with potential and talent to define trends in African literature. [24]

In 2020, Wanner was awarded the Goethe Medal, a yearly prize given by the Goethe-Institut honouring non-Germans "who have performed outstanding service for the German language and for international cultural relations". [25]

Kwani? is a leading African literary magazine based in Kenya that has been called "undoubtedly the most influential journal to have emerged from sub-Saharan Africa", although that tribute might more accurately go to Transition Magazine, which was founded in Kampala, Uganda, in 1961. The magazine grew out of a series of conversations that took place among a group of Nairobi-based writers in the early 2000s. Its founding editor, Binyavanga Wainaina, spearheaded the project shortly after winning the 2002 Caine Prize for African Writing. The first print issue of the magazine was published in 2003. Kwani? has been called "the most renowned literary journal in sub-Saharan Africa". It is produced by the Kwani Trust, which is "dedicated to nurturing and developing Kenya’s and Africa’s intellectual, creative and imagination resources through strategic literary interventions".

Chika Nina Unigwe is a Nigerian-born Igbo author who writes in English and Dutch. In April 2014 she was selected for the Hay Festival's Africa39 list of 39 Sub-Saharan African writers aged under 40 with potential and talent to define future trends in African literature. Previously based in Belgium, she now lives in the United States.

Finuala Dowling is a South African poet and writer.

Niq Mhlongo is a South African journalist and novelist.

Kwela Books is a South African publishing house founded in Cape Town in 1994 as a new imprint of NB Publishers.

Ellen Banda-Aaku is a Zambian writer who was born in the UK and grew up in Africa. She is the author of two novels and several books for children, and has had short stories published in anthologies and other outlets.

The 9mobile Prize for Literature was created by Etisalat Nigeria in 2013, and is the first ever pan-African prize celebrating first-time African writers of published fiction books. Awarded annually, the prize aims to serve as a platform for the discovery of new creative talent out of the continent and invariably promote the burgeoning publishing industry in Africa. The winner receives a cash prize of £15,000 in addition to a fellowship at the University of East Anglia.

The South African Literary Awards (SALA) were founded in 2005 to "pay tribute to South African writers who have distinguished themselves as ground-breaking producers and creators of literature", celebrating literary excellence "in the depiction and sharing of South Africa’s histories, value systems, philosophies and art as inscribed and preserved in all the South African official languages". The Awards honour living literary practitioners, as well as posthumous figures.

Africa39 was a collaborative project initiated by the Hay Festival in partnership with Rainbow Book Club, celebrating Port Harcourt: UNESCO World Book Capital 2014 by identifying 39 of the most promising writers under the age of 40 with the potential and talent to define trends in the development of literature from Africa and the African diaspora. Launched in 2014, Africa39 followed the success of two previous Hay Festival initiatives linked to World Book Capital cities, Bogotá39 (2007) and Beirut39 (2009).

The Aké Arts and Book Festival is an annual literary, cultural and arts event that was founded in 2013 by the Nigerian writer Lola Shoneyin, taking place in Abeokuta, Nigeria. Although it has featured new and established writers from across the world, its focus has been to promote, develop and celebrate creativity on the African continent in diverse genres. In 2018 the festival was held for the first time in Lagos, from 24 October to 27 October, with the theme being "Fantastical Futures". The Aké Arts and Book Festival has been described as the African continent's biggest annual gathering of literary writers, editors, critics and readers.

Hawa Jande Golakai is a Liberian writer and clinical scientist. In 2014 she was chosen as one of 39 of Sub-Saharan Africa's most promising writers under the age of 40, showcased in the Africa39 project and included in the anthology Africa39: New Writing from Africa South of the Sahara.

Novuyo Rosa Tshuma is a Zimbabwean writer and professor of creative writing. She is the author of Shadows, a novella and House of Stone, a novel.

Natalia Molebatsi is a South African writer, performance poet and cultural worker. She has developed a large following through her poetry salons, and is credited with having "been responsible for introducing the work of Alice Walker and Toni Morrison to the post-apartheid generation in South Africa." She lives in Johannesburg.

Chiké Frankie Edozien is a Nigerian-American writer and journalist. He is currently the Director of New York University, Accra. He directed the New York University Journalism Institute's Ghana based ‘Reporting Africa’ program from 2008 to 2019. He is a journalist who honed his skills writing about government, health and cultural issues for a variety of publications. 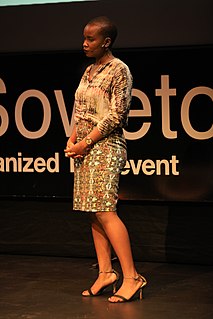 Panashe Chigumadzi is a Zimbabwean born journalist, essayist and novelist.

The Afrolit Sans Frontieres Festival is a virtual literary festival founded by South African author and curator Zukiswa Wanner as a response to the curfews and lockdowns related to the 2019–20 coronavirus pandemic within the African continent.

Elvira Espejo Ayca is an indigenous Bolivian artist and the director of the National Museum of Ethnography and Folklore in La Paz until 2020. In 2020 she was a joint winner of the Goethe Medal for improving cultural exchange.