The 2001 Cincinnati Bearcats football team represented the University of Cincinnati in the 2001 NCAA Division I-A football season. The team, coached by Rick Minter, played its home games in Nippert Stadium, as it has since 1924. 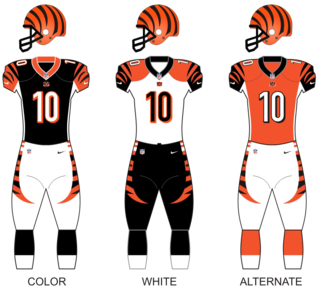 The Cincinnati Bengals are a professional American football franchise based in Cincinnati. The Bengals compete in the National Football League (NFL) as a member club of the league's American Football Conference (AFC) North division. Their home stadium is Paul Brown Stadium, located in downtown Cincinnati. Their divisional opponents are the Baltimore Ravens, Cleveland Browns and Pittsburgh Steelers.

Norman Julius "Boomer" Esiason is a former American football quarterback and sports analyst who played in the National Football League (NFL) for 14 seasons, primarily with the Cincinnati Bengals. He was selected by the Bengals in the second round of the 1984 NFL Draft, where he spent 10 nonconsecutive seasons. Esiason was also a member of the New York Jets and Arizona Cardinals. To date, he is the last Bengals quarterback to lead the franchise to victory in the playoffs, doing so in 1990. 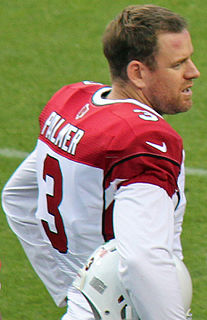 Carson Hilton Palmer is a former American football quarterback who played in the National Football League (NFL) for 15 seasons, primarily with the Cincinnati Bengals and Arizona Cardinals. Palmer played college football at USC where he won the Heisman Trophy in 2002. 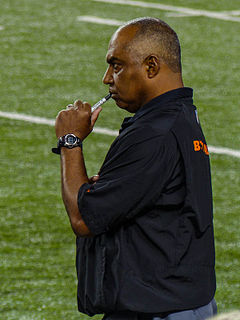 Marvin Ronald Lewis is the Assistant to the Head Coach for the Arizona State Sun Devils; Previously, Lewis was the head coach of the Cincinnati Bengals of the National Football League (NFL) for 16 seasons. He came to prominence as the defensive coordinator of the Baltimore Ravens from 1996 to 2001, whose defense in 2000 set the record for the fewest points allowed in a 16-game season and led the franchise to their first Super Bowl title in Super Bowl XXXV. This success resulted in Lewis being named the Bengals' head coach, where he served from 2003 to 2018. He was also a commentator for the Alliance of American Football (AAF).

The American Football Conference – Northern Division or AFC North is one of the four divisions of the American Football Conference (AFC) in the National Football League (NFL). The division was adopted after the restructuring of the 2002 NFL season, when the league realigned divisions after expanding to 32 teams. This is the only division in the NFL in which no member team has hosted a Super Bowl in their stadiums.

Troy McHenry Walters is an American football coach and former player who is currently the wide receivers coach for the Cincinnati Bengals of the National Football League (NFL). Walters played as a wide receiver and punt returner in the National Football League (NFL) for eight seasons. Walters played college football for Stanford University, was a consensus All-American and was recognized as the outstanding college wide receiver in the country. He was selected in the fifth round of the 2000 NFL Draft by the Minnesota Vikings, and also played professionally for the Indianapolis Colts, Arizona Cardinals and Detroit Lions of the NFL.

In Major League Soccer, several teams annually compete for secondary rivalry cups that are usually contested by only two teams, with the only exception being the Cascadia Cup, which is contested by three teams. Each cup or trophy is awarded to the eligible team with the better regular season record and are comparable to minor trophies played for in college football rivalries. Most cups are deliberately conceived as local derbies between teams in the same region. Rivalry cups are considered a tradition to most MLS fans and players alike. Out of the ten original MLS teams only three have not competed in these rivalry cups: Sporting K.C., New England Revolution and the defunct Tampa Bay Mutiny. The Texas Derby is the only MLS rivalry where the winner does not walk away with a cup trophy but instead they play for "El Capitán", a replica 18th century mountain howitzer cannon. Some derbies only contest for bragging rights of rival supporters groups.

The 1981 Cincinnati Bengals season was the franchise's 12th season in the National Football League, and the 14th overall. The team won their first AFC Championship, but lost Super Bowl XVI to San Francisco.

The 1990 Cincinnati Bengals season was the franchise's 23rd year in professional football and its 21st with the National Football League (NFL). The Bengals won the AFC Central division for the second time in three seasons.

The 2001 Cincinnati Bengals season was the franchise’s 34th year in professional football and its 32nd with the National Football League. In the first full season with Dick LeBeau as head coach, the Bengals abandoned their plans for developing quarterback Akili Smith as their starter by acquiring Jon Kitna from the Seattle Seahawks. The Bengals would win their first two games with Kitna behind center, and sat at 4–3 through the first seven games of the season. However, the Bengals would struggle again, losing their next seven games as Kitna struggled with inconsistency, throwing 22 interceptions while throwing only 12 touchdown passes. The Bengals would win their final two games to close the season with a 6–10 record, their eleventh consecutive season without a winning record. Despite the team’s struggles, All-Pro running back Corey Dillon had another stellar year, rushing for 1,315 yards.

The 1999 Cincinnati Bengals season was the team's 32nd year in professional football and its 30th with the National Football League. In what would be the final season of pro football being played at Riverfront Stadium, then known as Cinergy Field, the Bengals struggled out of the gates again losing 10 of their first 11 games. After winning two straight, the Bengals faced the expansion Cleveland Browns in the final game at Riverfront Stadium. The Bengals would win the game 44–28 before losing their final two games to finish with a 4–12 record.

The 1996 Cincinnati Bengals season was the team's 29th year in professional football and its 27th with the National Football League. The Dave Shula era comes to a sudden end when he is fired after a 1–6 start, as Jeff Blake struggles with turnovers. Former Bengals TE Bruce Coslet, former New York Jets head coach, and the team's offensive coordinator, would replace Shula as head coach. The move paid off right away as the Bengals won the first 3 games under Coslet. After losing two of their next three games, the Bengals closed the year with three straight wins to finish with an 8–8 record. One bright spot during the season, was that WR Carl Pickens became the first member of the Bengals to have 100 receptions in a season.

The 1986 Cincinnati Bengals season was the team's 19th year in professional football and its 17th with the National Football League (NFL). The Bengals were one of two teams with ten wins that failed to make the AFC playoffs in 1986.

The 1994 Cincinnati Bengals season was the team's 27th year in professional football and its 25th with the National Football League.

This is a list of high school athletic conferences in the Southwest Region of Ohio, as defined by the OHSAA. Because the names of localities and their corresponding high schools do not always match and because there is often a possibility of ambiguity with respect to either the name of a locality or the name of a high school, the following table gives both in every case, with the locality name first, in plain type, and the high school name second in boldface type. The school's team nickname is given last.

Mike Tressel is an American football coach who is currently the defensive coordinator for the Cincinnati Bearcats football team. Tressel, the nephew of former Ohio State head coach Jim Tressel, joined the University of Cincinnati's football coaching staff under Mark Dantonio in 2004. Tressel followed Dantonio to Michigan State when he was hired there in December 2006. He was named the acting head coach when Dantonio announced his retirement in February 2020. Tressel was one of two Dantonio assistants retained by Dantonio's successor, Mel Tucker.