The Keg of Nails

The Keg of Nails is a traveling trophy continuously-awarded to the winner of the American college football rivalry game between the Cincinnati Bearcats and Louisville Cardinals. [1] [2] [3] [4] The rivalry has stretched over the span of four conferences from the Missouri Valley Conference, to Conference USA, and more recently in the Big East Conference, which in 2013 was renamed to the American Athletic Conference. It is believed to be the oldest rivalry for the Louisville football team and the second oldest for Cincinnati, only behind the annual game with the Miami RedHawks.

The rivalry went on hiatus following the 2013 season, as Louisville moved to the Atlantic Coast Conference on July 1, 2014. Cincinnati leads the series 30–22–1. [5]

The series was played sporadically before becoming an annual match up from 1966 to 2013, with only a brief hiatus from 1992 to 1996. The match-up gained more significance with the growth of both programs into the 2000s, primarily with the success under coaches John L. Smith and Bobby Petrino for Louisville and Mark Dantonio, Brian Kelly, and Butch Jones for Cincinnati. Both programs would challenge for and win titles during their shared time in Conference USA and the Big East.

The trophy is a replica of a keg used to ship nails. The exchange is believed to have been initiated by fraternity chapters on the UC and U of L campuses, signifying that the winning players in the game were "tough as nails." The present keg is actually a replacement for the original award, which was misplaced by Louisville, lost during some construction of office facilities. It is adorned with the logos of both schools and the scores of the series games.

November 28, 2003: The Cardinals came to Cincinnati in what would go down as a shootout on a snowy afternoon. The Bearcats and QB Gino Guidugli would overcome a 28-7 second quarter deficit and the team was ahead 40-35 with 2:20 remaining in the game. An impressive 54 yard touchdown pass by Stefan LeFors with 70 seconds left would be enough to help Louisville escape with a 43-40 victory. This was the final Keg of Nails game by Cincinnati head coach Rick Minter. [7]

October 14, 2006:The Bearcats took an early lead in the game, but the No. 7 Cardinals led by head coach Bobby Petrino were able to score twice at the end of the half, including on a 1-yard pass by quarterback Brian Brohm, to take a 13-10 lead to halftime. Late in the fourth quarter, the Bearcats had a chance win with another pass in the endzone, however it was knocked down by Cardinal cornerback Gavin Smart to preserve the win. The Cardinals won 23-17 and continued their 15-game home winning streak. [8]

November 14, 2008: The No. 22 Bearcats, searching for their first Keg of Nails victory in six seasons, came to Louisville to take on a struggling Cardinals team. Cincinnati quarterback Tony Pike exited the game with an injury in the fourth quarter. The former starter, replaced by Pike after breaking his leg, Dustin Grutza entered the game and led the game winning, seventy-two yard drive for the Bearcats to win the game 28–20. The Bearcats would go onto win their first Big East conference title. [9]

December 5, 2013: In a prime time, Thursday night game the No. 16 Cardinals came into Nippert Stadium to play the No. 23 Bearcats. Teddy Bridgewater would have a fantastic game, in which he would lead Louisville to a 31–24 OT victory. This was the final game of the series for the foreseeable future. [10] 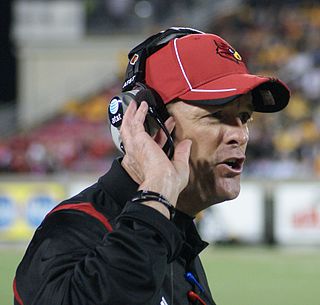 Steven Jon Kragthorpe is an American football coach and former player. He is currently an administrative assistant for the Louisiana State University football program after previously serving as quarterbacks coach for the Tigers football team. He served as head coach at Louisville from 2007 to 2009, and for Tulsa from 2003 through 2006.

Michael Warren Bush, Jr. is a former American football running back. He was drafted by the Oakland Raiders in the fourth round of the 2007 NFL Draft. He played college football at Louisville.

The Louisville Cardinals football team represents the University of Louisville in the sport of American football. The Cardinals compete in the Football Bowl Subdivision (FBS) of the National Collegiate Athletic Association (NCAA) and compete in the Atlantic Coast Conference.

The 2006 Louisville Cardinals football team represented the University of Louisville in the 2006 NCAA Division I FBS football season. The team, led by Bobby Petrino in his fourth year at the school, played their home games in Papa John's Cardinal Stadium. Playing in their second year in the Big East Conference, the team finished the regular season with eleven wins and one loss and were conference champions. They represented the Big East in the 2007 Orange Bowl and with the win ended the season with a 12–1 record. The team ended the season ranked fifth in the nation.

The 2007 Louisville Cardinals football team represented the University of Louisville in the 2007 NCAA Division I FBS football season. The team, led by Steve Kragthorpe in his first year at the school, played their home games in Papa John's Cardinal Stadium and were in their third year in the Big East Conference. With the stunning upsets, the team has missed a bowl game for the first time in a decade.

The River City Rivalry is the name given to the Cincinnati–Pittsburgh football rivalry. It was an annual game played between former Big East rivals University of Pittsburgh and University of Cincinnati. The rivalry itself was relatively brief, played annually from 2005, during which season the rivalry trophy was introduced. Before the rivalry was titled, the two teams played each other in 1921, 1922, 1979, and 1981. The rivalry went on hiatus, like many others throughout the country, in the aftermath of the 2010–14 NCAA conference realignment, which left the programs in separate leagues. However, the two teams are scheduled to meet in a home-and-home series for the 2023 and 2024 seasons.

The Western Kentucky Hilltoppers football program is a college football team that represents Western Kentucky University. The team competes at the NCAA Division I Football Bowl Subdivision level and represents the university as a member of Conference USA in the Eastern division. The program has 1 national championship (FCS/I-AA), 13 conference championships and 4 FBS-level Bowl wins. The team's current head football coach is Tyson Helton. The Hilltoppers play their home games at Houchens Industries–L. T. Smith Stadium in Bowling Green, Kentucky.

The 2009 Cincinnati Bearcats football team represented the University of Cincinnati in the 2009 NCAA Division I FBS football season. The team, coached by Brian Kelly, played its home games in Nippert Stadium.

The 2013 Belk Bowl was an American college football bowl game that was played on December 28, 2013, at Bank of America Stadium in Charlotte, North Carolina. It was one of the 2013–14 bowl games that concluded the 2013 FBS football season. The twelfth edition of the Belk Bowl, it featured the Cincinnati Bearcats of the American Athletic Conference against the North Carolina Tar Heels of the Atlantic Coast Conference. It began at 3:20 p.m. EST and aired on ESPN. The game was sponsored by the Belk department store company. North Carolina defeated Cincinnati by a score of 39–17.

The Cincinnati–Louisville rivalry is a college sports rivalry between the University of Cincinnati Bearcats and the University of Louisville Cardinals. The rivalry between these two schools, located about 80 miles (130 km) apart, dates to their first men's college basketball game in 1921, and has continued across all sports, with the football series gaining attention as well, having started in 1929. Both universities share common characteristics, both being over 200 year old institutions in urban settings. The schools have also shared conferences historically, with the rivalry stretching over the span of four conferences from the Missouri Valley Conference, to the Metro Conference to Conference USA, and more recently in the Big East Conference, which in 2013 was renamed to the American Athletic Conference. After the 2013–14 season, Louisville joined the Atlantic Coast Conference and since then the rivalry has been put on hiatus in football and basketball. However, many other sports at the universities, such as baseball, continue to battle periodically.

Cincinnati–Louisville rivalry may refer to: